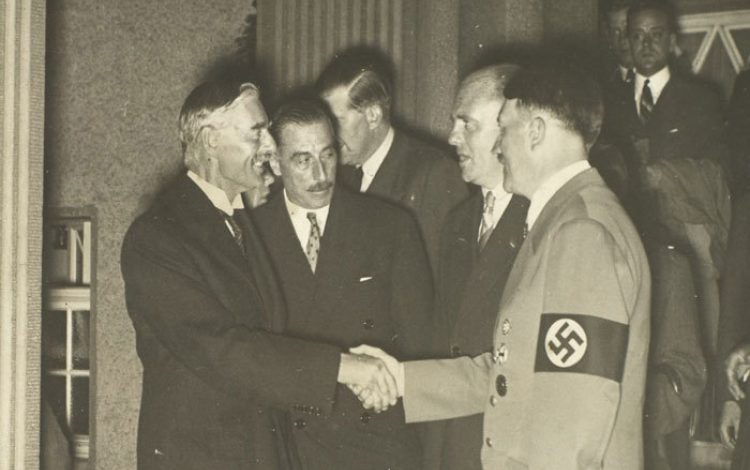 Clumsy Brexit negotiations are nothing new – remember Munich in 1938

One of my favourite board games as a child was called Diplomacy.

It was a slightly more complicated version of the more popular Risk. The big difference with Diplomacy was that you could negotiate your way out of trouble and into power, rather than simply starting a war.

Set around the beginning of the 20th century, it seemed a very British game, which promoted a self-image of cunning competence in dealing with ‘foreigners’. Even if the world, and Britain, wasn’t like that any more, Diplomacy made you feel as if it had been so once.

As our government stumbles around, losing the pieces, knocking over the board and nipping out to discuss its next move with the rest of the family in our game of Brexit Diplomacy, many have been tempted to portray this as a uniquely terrible chapter in an illustrious history of British negotiating.

Whatever you want from the outcome, it’s hard to argue that Britain has improved its diplomatic reputation over the past three years.

To historians, though, Britain’s diplomacy has as often been as much clown car as Rolls-Royce. An early honourable mention in a long roll-call of failure is the 17th-century negotiation for a marriage alliance between the future Charles I and the Infanta of Spain.

The idea was that this Protestant-Catholic union would counterweight the influence of France and promote religious toleration. Things seemed to be progressing nicely until Charles, with his new best pal (and his father James I’s lover), the Duke of Buckingham, turned up in Madrid to take over the negotiations, to the surprise of the English embassy.

Whatever Buckingham said, it didn’t help. Instead of being courted as honoured guests, the two ‘knights of adventure’, as they styled themselves, began to feel like prisoners, and fled. Instead of ringing wedding bells, Charles persuaded his father to seek Parliament’s approval for war against Spain.

Imperial expansion did promote alliances over conquest on occasion: that was the idea behind ‘divide and rule’. In India, the British negotiated with rival princes as part of their strategy, and they later did the same in Africa.

But the failures continued, too. Perhaps the loss of America can’t quite be called a diplomatic defeat, since the British didn’t really try negotiation. On the other hand, when dealing with a power that they deemed an equal – imperial China – the hallmarks of a vintage British diplomatic fiasco were on display.

The embassy under George Macartney that arrived in northern China in 1793 ticked all the boxes: self-importance (Macartney fussed over what form of deference to show the Qianlong emperor, settling on kneeling rather than full prostration, which didn’t go down particularly well); ignorance (the delegation struggled to find an interpreter and their ideas of Chinese culture were almost entirely based on fantasy and speculation); mendacity (Macartney pretended that Britain had no commercial ambitions in China, which wasn’t true); and, more forgivably, failure to impress.

When Macartney demonstrated the cream of British technology – watches, telescopes, balloons and automata – Qianlong observed all these marvels for a couple of minutes, declared they were ‘good enough to amuse children’, and walked out. The emperor later wrote that if foreigners ‘come in arrogance, they get nothing’. The long freeze in relations, which eventually resulted in the first Opium War of 1839, had begun.

As a rising imperial power, Britain wasn’t much good at talking. At its zenith, it was even worse. Perhaps it didn’t feel the need. As the Prime Minister Lord Salisbury put it with textbook pomposity, ‘England does not solicit alliances; she grants them.’

The year 1899 stands out. Diplomatic failure resulted in the second Boer War, Germany refused an alliance offered by Joseph Chamberlain (no matter: his son would have another go) and the Hague Conference, which was meant to bring world peace and at which Britain played a major part, did no such thing.

And so it continued. At Paris in 1919, the theme of linguistic ignorance resurfaced, when Henry Wilson, Chief of Imperial General Staff, admitted, ‘We are going to hand out terms to the Boches without reading them ourselves first. I don’t think in history this can be matched.’

Less than 20 years later, the second Chamberlain brought British diplomacy to its absolute nadir (though most people didn’t think so at the time), and Hitler drew his conclusion: ‘Our enemies are little worms; I saw them at Munich.’

After the war, the insurmountable diplomatic object was General de Gaulle, who kept Britain out of the EEC while he remained president of France. If you think it’s taking a long time to leave, it’s worth remembering that it took more than 10 years to talk our way in.

Jaw-jaw is definitely better than war-war: what a pity that we’re not much good at it.

I Once Met... Anthony Eden