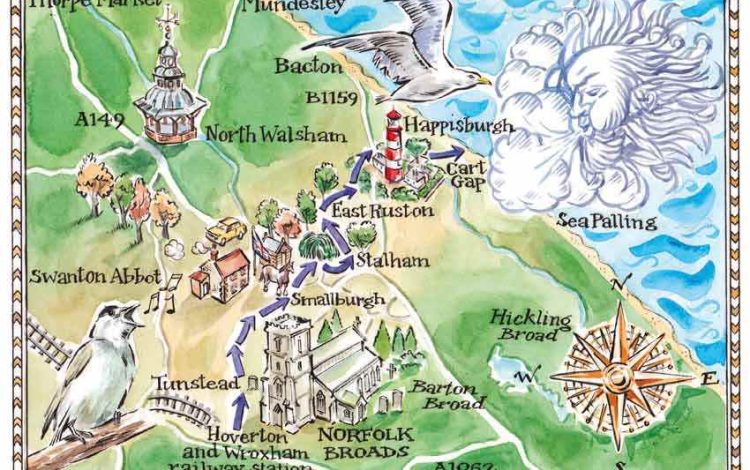 Patrick Barkham heeds the call of the sea

Over recent weeks of lockdown, the sea is the thing that many of us miss most.

I’ve been reading James and the Giant Peach to my son, where poor bullied James Henry Trotter is imprisoned on a hill by Spiker and Sponge, his psychotic aunts. To add to his torment, on a clear day, he can make out a distant line of blue – the seaside.

I guess I live a similar distance to James from the sea – a dozen miles – but unlike in his world, there is no hint of it around my home. The Broads are low-lying, wooded, and humid. No salty blast here.

I craved the sea for its sense of clarity and freedom. So I decided to walk there, even if that stretched the government’s definition of daily exercise.

This is, truly, a golden age for walking. Road traffic has – temporarily – blissfully lagged to the level of a Sunday in childhood. I met barely a car on this wiggling route by lane and path.

The tranquil minor roads were scented by yellow-green Alexanders, a Canary Islands plant introduced by the Romans, which once thrived only close to the coast. The silence was broken only by a blackcap, belting its wine-rich melody from the brambles.

I could have found my way simply by keeping the fresh north-easterly wind in my face. It swept over the flat, intensively farmed countryside, which was studded with stately flint churches. The first was Tunstead, its cavernous size testimony to Norfolk’s medieval wool wealth. It could accommodate hundreds but had only an old rectory for company.

I turned onto an old Roman road, dotted with a straggly settlement of tiny old houses with pretty names like Lilac Cottage, and infill bungalows from the 1970s. Time gave the cottages a picturesque patina, but this was ungentrified countryside.

Money was tucked away in handsome old farms with their Lithuanian labourers living in caravans, but there weren’t affluent retirees or city second-homers here. Gardens were devoted to useful sheds, horses, old machinery, exhausted Land Rovers, eggs for sale and the occasional flag. A banjo played in my head.

Long walks are like cricket matches or box sets, unfolding slowly, epic in scale, and containing highs and lows. The high came when I crossed the unfarmable swamps beside the River Ant. Between thickets of alder, oak and tumbledown willow, I followed Broad Fen Lane, a lovely green mile tracing the five-metre contour line. A heron rose from a ditch; a stoat dashed for cover.

The low came when I climbed High Hill – all 15 metres of it. This mile crossed three prairie fields, a desert of wheat and barley, without a hedge or a tree. The farmer had ploughed and sown over the path and offered a tyre track for a path instead. I was supposed to be thankful – but why do we traduce the land and rights of way like this?

Next came East Ruston Old Vicarage, the polar opposite of the arable desert. Here was an act of love to the land, a stunning modern garden created by Alan Gray and Graham Robeson (and to be reopened to the public after lockdown). I was excited by a moated farm on the map – but saw only chicken sheds and no moat. North-east Norfolk can fulfil your gentrification dreams, folks!

The cheery red-and-white stripes of Happisburgh (pronounced ‘Haysbruh’) Lighthouse rose on the horizon but there was still no view of the sea from this low land. I didn’t see the surf until the lane climbed the old dunes at Cart Gap and abruptly turned into a slipway.

Ah! The full force of the north-easterly struck. The usually calm, brown North Sea frothed with silver fury and pounded the old sea defences. The air felt as if it was 100 per cent oxygen. The only living things in sight were gulls floating adroitly against the gale.

In case you’re wondering, I cheated and got a lift back. A minute after I departed, a police car beetled down to the closed car park to chastise anyone enjoying this magnificent sea.