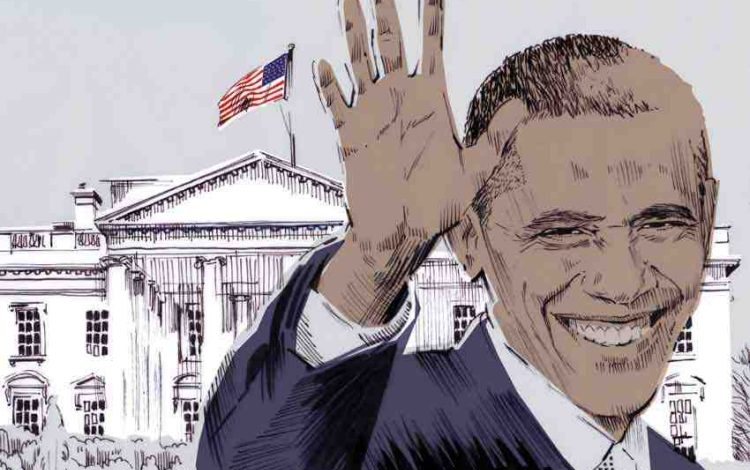 'No red states, no blue states: just the United States' or is the Disunited States?

It was the 21st century’s first political fairy tale: a gangly black youth from Honolulu goes to Harvard, becomes a secular saint and wows America and the world with his clunky slogan: the audacity of hope.

Luck also played its part and few can claim a more charmed life than Barack Hussein Obama. His golden ticket to the White House came in a phone call from presidential candidate John Kerry’s staff inviting him to give the keynote address at the 2004 Democratic Convention.

Not yet even a first-term Senator, Obama had a way with words, a ‘Yes, we can’ optimism and an ability to pluck at patriotic heartstrings that ultimately propelled him into the express elevator to the penthouse suite of the free world. Little more than four years later, it was Obama, not Kerry, who climbed into the Beast to drive to his inauguration on Capitol Hill.

Even today, President-elect Joe Biden’s much-used stump-speech applause line – ‘No red states, no blue states: just the United States’ – was actually forged by the Kenyan-American from Hawaii on that heady July evening in Boston, 16 years ago.

In his memoir, A Promised Land, Obama recalls the magic of that speech. ‘There’s a physical feeling, a current of emotion, that passes back and forth between you and the crowd … a sense of connection that overrides our differences and replaces them with a giant swell of possibility.’

Then he adds, ‘And like all things that matter most, you know the moment is fleeting and that soon the spell will be broken.’

And that, too, is the narrative arc of this 700-page volume and its sometimes melancholy mood music. For the new President’s promised land – a vision of a reborn, empathetic town-meeting America, newly united for the common good – runs slam-dunk into its counterpart: the rugged, self-centred individualism of the Wild West.

The first 200 pages crackle along at breakneck pace to his 2008 election triumph. Then the poetry of campaigning grinds into the thick, sludgy prose of government horse-trading in the gridlocked swamp of Washington, DC.

Aware that the endless meetings and cobbled compromises that are the day job need to be leavened, Obama deftly weaves in worldly-wise Michelle and his daughters to lighten the story.

In one wonderfully comic episode, a staffer rings to say he has won the Nobel Peace Prize.

‘For what?’ he asks with wholly appropriate self-deprecation, before telling his dozing wife the news.

‘ “That’s wonderful, honey,” Michelle said; then rolled over to get a little shut-eye.’

These little asides, pen portraits of people, foreign trips and the sheer weirdness of the Office are what makes the book fun – our own fantasy ride into the day-to-day life of being President. The endless meetings and toing and froing on legislation reveal the downside.

British readers still wedded to the notion of a special relationship will feel the book disappoints. In the account of the post-crash 2009 London G20 meeting, Gordon Brown is credited with being thoughtful and responsible but not the saviour of the global economy as some have claimed. David Cameron is granted ‘the easy confidence of someone who’d never been pressed too hard by life’.

Quite clearly to the President, the views of Angela Merkel and Nicolas Sarkozy – ‘a figure out of a Toulouse-Lautrec painting’ – had more weight, though at times the Frenchman’s emotional outbursts and the German’s eye-rolling appeared to be almost a comic double act.

There are insights too into the long, dark nights of the soul that dampen the President’s Pollyanna-ish tendencies. In Prague, Václav Havel warns, like an Old Testament prophet, ‘You’ve been cursed with people’s high expectations. It means they are also easily disappointed.’

In these first months of his presidency, intimations of the limits of power come frequently and early. Obamacare is passed; a Recovery Act tackles the financial crisis; the auto industry is saved.

But dogged, relentless and often subliminally racist opposition also takes hold. Obama’s Manichean tendency to see the world as a struggle between good and evil gives way to a growing realisation that similar passions are mirrored on the Republican right.

When Donald Trump began proselytising the ‘birther’ myth – that Obama had not been born in America and therefore could not legally be president – he simply ignored it, more amused than worried. But at the mid-term elections in 2010, Obama’s majority in the House collapsed.

Hardly surprising, then, that to lift our spirits he ends this first volume of his memoirs on a note of triumph. Only a few hours before the helicopter-borne SEAL teams clattered into action to kill Osama bin Laden, the President is playing it for laughs at the annual White House Correspondents’ Dinner in Washington with his nemesis in the audience.

Now the birther issue was resolved, he said, Trump could concentrate on what really mattered – ‘like did we fake the moon landings?’

Volume Two of the Obama fairy tale will have to explain what exactly happened to the audacity of hope – as a red, Republican tide in 2014 sweeps through Congress, carrying Senate and House before it.