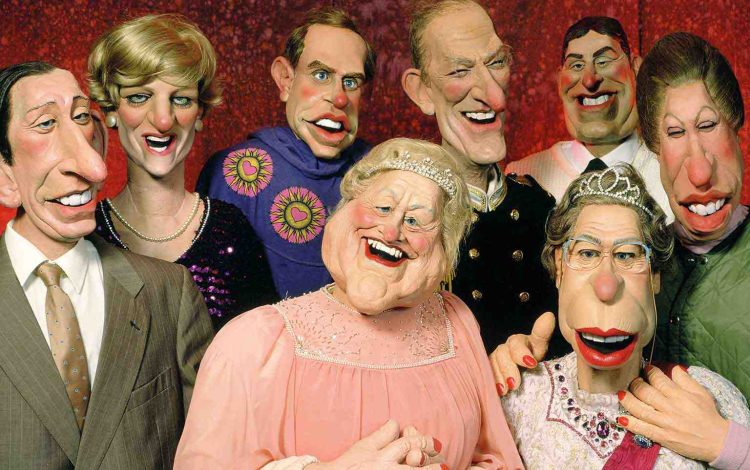 As Spitting Image is deemed too shocking to screen in America, producer John Lloyd recalls how the show was nearly banned

As Spitting Image is deemed too shocking to screen in America, producer John Lloyd recalls how the show was nearly banned

Spitting Image debuted on Central Television in 1984. The title wasn’t mine: I wanted to call it Rubber News. But it transpired there’s a magazine for people who like that kind of thing, and we felt it would be wrong to raise their hopes.

At its peak, Spitting Image was number three in the ratings and getting 15 million viewers a week – 1½ million more people than it had taken to re-elect Margaret Thatcher to power in 1983. It ran for 13 years, and right from the start it ran into trouble.

You are making a complete fool of yourself with your hideous caricature of our much loved and respected Royal Family they are very special to a lot of people but not to nig nogs like you. I am very surprised you are even be allowed to show your rubbish on TV for which we are paying £46 licence a year for anyway the next time you make [a puppet] make it of yourself or your mother.

Sorry, I don’t watch [the programme] but we get the [Sunday] People.

From the outset, Spitting Image caused so much worry at the highest levels that, for the first six shows, I had to go and defend it, frame by frame and line by line, to the Independent Broadcasting Authority at their HQ on the Brompton Road.

‘Now, John, you have here one of the dollies… Who is that?’

‘Ah, yes, so the Frost dolly says to the dolly next to it – I think that’s Bernard Levin, isn’t it? Looks jolly like him! Er … the Frost dolly says, “Why did you become a journalist, Bernard?” And he says, “I think it’s because I was circumcised with a pencil sharpener…”

Clearly, I was going to have to be more cunning at getting stuff past them.

Most of you oldies will remember that the kind of anti-hero of Spitting Image in those early years was Norman Tebbit, the then Employment Secretary, who in the programme was portrayed as a shaven-headed bovver boy in a biker jacket.

In episode three, his puppet was interviewed by the Robin Day puppet, and was asked what he proposed to do about the unemployment crisis. The semi-housetrained polecat replied, ‘If the unemployed are so hungry, why didn’t they eat their own bodies?’ He proceeded to demonstrate by grabbing the arm of a third puppet, liquidising it in a Magimix and drinking the pink soup that resulted.

Back I went to the IBA.

‘Now, John, John, John … [sigh] … the business of Mr Tebbit drinking a human body. Do you find that funny?’

‘Not meant to be funny?’

‘No, sir,’ I said. ‘It’s merely an homage to Jonathan Swift’s A Modest Proposal of 1729, where he suggests that if the Irish are short of potatoes because of the famine, there are plenty of babies to eat instead.’

But the letters kept coming – in their hundreds. My PA divided them into two roughly equal piles, nice and nasty. And, being BBC-trained, I read them all. The first kind were often heart-rending: ‘I’ve been unemployed for five years – I’m desperate and can’t stand it any more. I was going to kill myself, but I thought if I can just hang on till Sunday, I can have a last really good laugh, and it was so funny I decided to hang on for another week.’

Later on, when things had calmed down a bit (well, insofar as they ever did), David Frost managed to get us a commission for four shows with NBC in the States, in which he would star. As a result, I had the honour to be asked to the very first of his famous celebrity-fuelled summer drinks parties.

I arrived at the same time as, of all people, Elton John, who was going through his brief straight period and had brought along his wife, Renate. We walked through the house and looked down into the garden. It was astonishing.

There weren’t that many guests, but absolutely all of them were household faces: world-class actors, half the Tory Cabinet and several members of the Royal Family. Elton John, whom I didn’t know, and have never met since, turned to me (as if to another nervous new boy) and said, ‘F*** me, look who’s here…’

I found myself alone in a corner of the garden with a distinguished-looking elderly gent. ‘Excuse me, sir’, I said, ‘but – apart from myself – you’re the only person here I don’t recognise…’

Things then took an alarming turn. An attractive, middle-aged woman bore down on me, quite distressed. She was Diana, the girlfriend, later wife, of the then Home Secretary, Leon Brittan. ‘It’s so unfair!’ she said, ‘You’ve given poor Leon five warts on his face, and he’s only got three!’ At that point, the Home Secretary himself leapt out of a bush behind me. ‘Yes,’ he said, pointing to various specific areas of his anatomy, ‘Look! One, two, three…’

A couple of series later, the board of Central Television, somewhat nervously, invited Norman Tebbit and his wife for lunch. The reason these men – and in those days they were, of course, all men – were nervous was that it was well known that Margaret Thatcher was quite capable of taking away a television franchise if the holders weren’t behaving to her liking, and had in fact done so with Thames TV, over the programme Death on the Rock, about the SAS killing three IRA members in Gibraltar in 1988.

Oh dear, this was what the Board had dreaded! The besuited gentlemen froze in fear. They sensed their livelihoods going right out of the window. Then the Managing Director, Andy Allan, who was braver than most, asked anxiously, ‘Ah … oh dear, I’m so sorry. Why’s that, Mrs Tebbit?’

‘Because Norman’s always wanted a leather jacket,’ she said, ‘and now he feels he can’t buy one…’

Decades later, I found myself interviewing Lord Tebbit on Radio 4 – not about politics, as it happens, but as a stand-in presenter on Michael Rosen’s Word of Mouth. Off air, beforehand, I asked him how he would like to be addressed. ‘You may call me a semi-housetrained polecat, if you wish,’ he replied (since his ennoblement, a polecat adorns his coat of arms). And afterwards, we got to chatting about Spitting Image.

He told me he was one of the very few politicians who genuinely found his puppet funny (as he writes, left). I admitted to having had a sneaking admiration for him in person, because he meant what he said.

‘I think we deserved each other, really,’ I said. ‘Because you were conviction politicians – and we were conviction broadcasters.’ Sadly, you don’t see much of either breed any more.

After 23 years, there’s a new series of Spitting Image in production. There are some hilarious bits, I understand, much ruder than any terrestrial channel would allow. But I’m deeply relieved they didn’t ask me to produce it. It nearly killed me first time round.

The new Spitting Image series airs in the autumn (BritBox)

Win a copy of The Mystery of Charles Dickens by A. N. Wilson

Who is Allan Shiach? John Lloyd