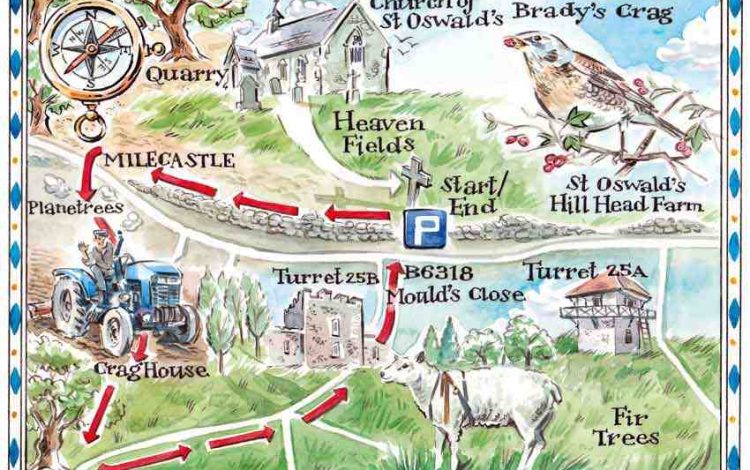 A heavenly loop along Hadrian's Wall

Where better to begin and end a walk than in a place called Heavenfield?

Hadrian’s Wall is a military march across the northerly limit of the Roman Empire and, of course, arrow-straight.

Around Heavenfield, however, there are footpaths and lanes offering a circular walk, and the map bristles with intrigue, from Turret 25B to a place called Planetrees.

I pulled into a layby on the B6318, ‘the military road’, as locals call it. It is surely the best drive in England, a swooping, desolate Roman line which sweeps past fort after fort.

Beside the road stood a weathered, wooden cross, erected in the 1920s, commemorating one raised by Oswald and his men some 1,400 years ago.

It was around 634 when Oswald’s small band of men confronted mighty Cadwallon of Gwynedd, who had already defeated Oswald’s uncle and brother on the craggy edge of the Whin Sill, where Hadrian’s Wall still stood tall.

Oswald’s unlikely victory was attributed to his fighting under a wooden cross, which he erected after converting to Christianity during exile on Iona.

The cross Oswald raised became so popular for its healing powers that a church was built here. Bede recorded, ‘Even to this day, many cut off small chips from the wood of the Holy Cross which being put in water, men or cattle drinking thereof, or sprinkled with that water, are immediately restored to health.’

It was a bright, cold winter’s day, and every small sound travelled far in this vast, almost silent landscape. Before taking the footpath towards Planetrees, I visited the 18th-century iteration of St Oswald’s church, which stood on high ground surrounded by old sycamores from where rooks called.

To my surprise, the church was open. Even more amazingly at a time when no one is welcome anywhere, it sang with friendly notices: ‘This church is always open’; ‘Come in, come in.’

I almost expected to be converted, sitting alone inside that beautiful, plain building with the morning sunlight streaming through the windows. There was no lightning bolt but there was immense peace, and that was enough.

As I walked west, the grassy fields were ridgy with diggings, mysterious building works from past ages. I hadn’t realised that there was not much of Hadrian here. Wall aficionados might want to walk east from Cawfields, where the 2,000-year-old stonework makes modern walling look primitive.

Planetrees, I discovered, was a section of Hadrian’s Wall. It was named after a local farm saved by poet and historian William Hutton. He probably invented the idea of walking the length of Hadrian’s Wall, producing a book in 1801.

He discovered a local farmer removing the wall to build a farmhouse and argued, ‘If the Wall was of no estimation, he must have a mean opinion of me, who would travel 600 miles to see it.’

Despite a landscape scored by the exercise of power over the ages, everything about this morning walk was gentle and welcoming. At Planetrees, I passed an old boy in a small tractor ploughing by the footpath. The earth smelt delicious, and the farmer gave me the thumbs-up.

Only later did I learn that the device was a raddle, which recorded which ewes a tup had mounted and, it was to be hoped, mated.

As I returned over the craggy Whin Sill, the wintry air was suddenly filled with a chur-chup-chup from a multitude of birds. Twenty fieldfares assembled on an ash which was yellow with lichen. Our friends from the north!