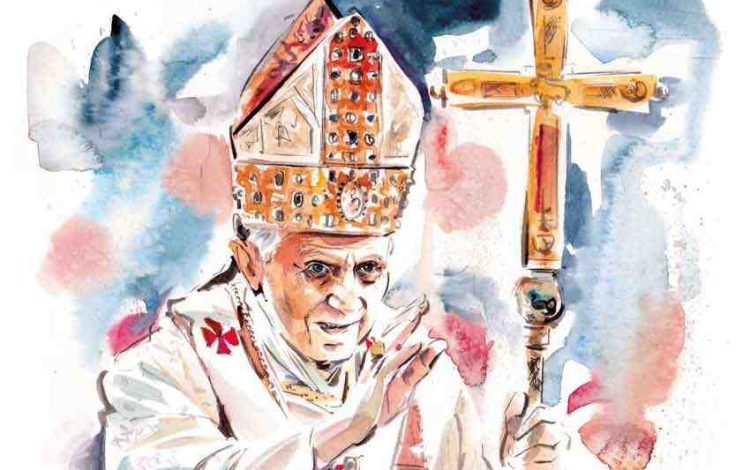 When Joseph Ratzinger, better known as Pope Benedict, now the Pope Emeritus, was a little boy growing up in Bavaria, children didn’t write to Santa for presents. Instead they wrote letters to the Christ Child.

One of his survives, from when he was seven: ‘Dear Christ Child, you will soon float down to Earth. You want to bring joy to children. You also want to bring me joy. I wish for a Mass book, a green Mass vestment and a JESUS heart. I will always be good. Best wishes from Joseph Ratzinger.’

The reason he wanted a vestment was to play at saying mass, as he and his brother Georg did at a small altar, with either their sister Maria or the brewer’s daughter acting as altar girl. It wasn’t exactly cops and robbers.

This is the first of two volumes, covering Joseph’s childhood in Bavaria up to the Second Vatican Council, in which, still young, he played a decisive role. With a decent editor, it could have been half the size, in one volume, without losing the good bits.

Peter Seewald has done laborious research, including extensive interviews with the Pope-emeritus.

In later life, he got a reputation as Rottweiler Ratzinger, head of the Vatican body that safeguards church doctrine, and that reputation as a latter-day Torquemada remained with him as Benedict XVI, the name he took as Pope.

He is usually regarded by Catholic liberals – quite unfairly, I think – as the reverse of nice, empathetic Pope Francis. Remember that film The Two Popes which juxtaposes an emotionally constipated Anthony Hopkins, as Benedict, with his warm, football-loving successor? This book shows a very different Joseph Ratzinger: a shy, clever and sensitive boy who became a profoundly gifted theologian and a formidable liberalising influence at the Second Vatican Council.

He is also musical, terrifically keen on Mozart – perhaps the only resemblance between the film Benedict and the real one is that both play the piano.

The popular perception of Benedict is of a liberal who turned reactionary in the wake of the Second Vatican Council, when the Church went a bit off the rails. This volume stops with the council – so we shall have to wait for the sequel to see how Seewald debunks that charge.

Joseph Ratzinger’s parents were simple, devout people, his father a police commander, his mother a pastry cook; he was 50, she 43 when Joseph was born on Easter Saturday 1927. He had advertised for a wife in the local paper with economic brevity: ‘Mid.civ.serv.sgl. Cath. 43 y, clean past, from the country, seeks gd Cathol. pure girl, good cook and all hswk … with furn. to marry asap.’ Not quite Tinder, but at least it was honest.

The three young Ratzingers would have had an idyllic childhood in a Sound of Music region, were it not that they grew up in tandem with the rise of Hitler. Their father detested Nazism and retired early to a farmhouse in a remote village where the family lived on very little money.

Both sons were educated in a junior seminary. In the war, they did their best to keep their heads down, until the seminarians were conscripted into the armed forces; Joseph was sent into an anti-aircraft unit at the age of 17.

During his time as a prisoner of war, he wrote Greek verse into a copybook. For all the jeering when he became Pope about his being a Nazi, he manifestly loathed the whole Nazi project.

He became a priest and a brilliant young theologian, and was a university lecturer at the time of the Vatican Council. The Cardinal Archbishop of Cologne took him to Rome as his adviser and speechwriter. Joseph Ratzinger ended up as one of the brains of the German delegation with a decisive role in transforming the Council into a radical turning point for the church.

Pope Benedict is fascinating as an individual; this biography less so. It’s discursive and clunkily translated – one chapter is headed The Spin Doctor, which is bizarre. Still, I’m looking forward to the next volume.

The rush to the glens

Buy the books from the Christmas Gift Guide 2017 supplement