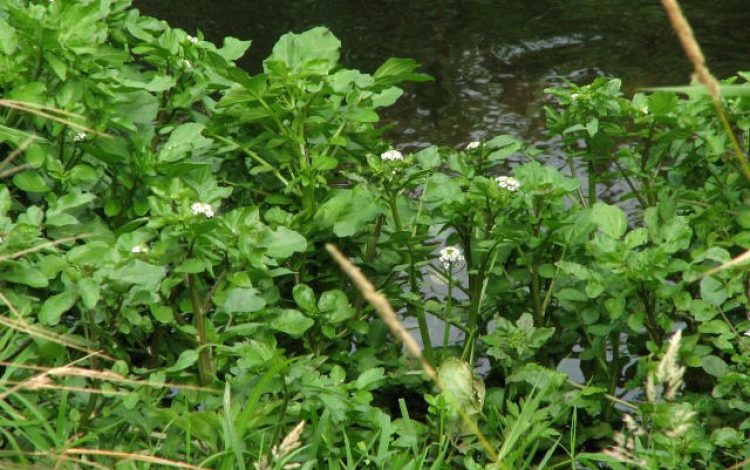 Watercress at the ready, even without running water in your garden

Don’t eat the watercress in the river, I remember being told as a child, or you’ll get liver fluke. According to Richard Mabey, author of Food for Free, the watercress to avoid grows in stagnant water or in streams that flow through fields, where this nasty little parasite, having infected livestock, may get into the stems of watercress.

Grown commercially, in pure running water away from rivers, watercress presents no health hazards – in fact, it has high nutritional value, being packed with vitamin C, iron and calcium. However, it is simple enough for kitchen gardeners to grow their own, without the need for running water in the garden.

Perhaps the best advice is to grow watercress in large pots of damp compost, standing in troughs or other containers in about two inches of water, changed or freshened once or twice a week. A plastic washing-up bowl or, with a number of pots, an old bathtub is suitable for this purpose.

The plants can be propagated from seed or from a bag of watercress bought in a supermarket, which will root more quickly if first soaked in water for a week. The seeds may take up to two weeks to germinate in early spring, but the plants will then grow quickly and provide cut-and-come-again salad leaves throughout the summer.

Nasturtium officinale is the scientific name for watercress. While its peppery taste is similar to that of nasturtium flower leaves, the two are apparently unrelated. Watercress leaves should be picked before the plant’s small white flowers appear.

Then there is land cress (highly recommended by Sarah Raven); its seeds can be sown as late as October. At this time of year, land cress is best grown in a container or, if in the ground, under a cloche. It should be watered regularly and doesn’t mind cold weather.

The flavour and the health benefits are similar to those of watercress, and the leaves can be cropped continually through the winter for soups and salads. To use the modern expression, what’s not to like?