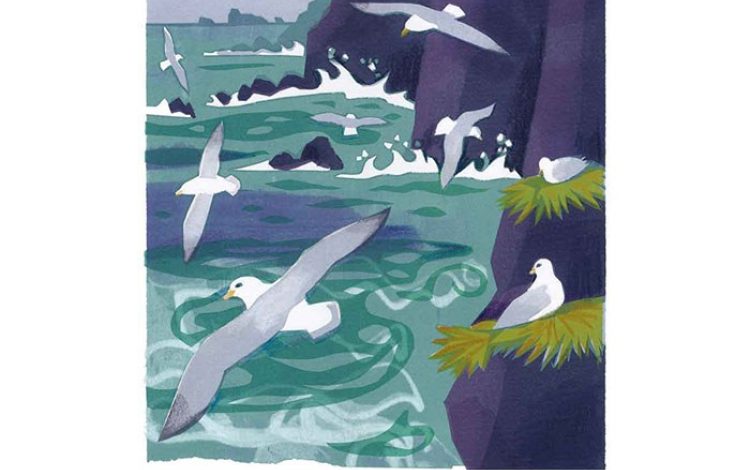 I watch the fulmar hurl its breast

To the wind’s unseen geometry;

Spread wings on nothing, reckless of gravity,

And ride that risk

And be carried there.

Katrina Porteous is from Northumbria, where the relentless, 150-year-long southern and eastern expansion of the fulmar (Fulmarus glacialis) means they have bred at Bamburgh Castle since 1934 and, as elsewhere in Britain, even inland.

The fulmar is an ocean-wanderer, but some use their native cliffs as a base all year round. May to July is the breeding season. They nest typically on slopes above cliffs; also on the cliffs themselves and elsewhere. The usual single chick is left, suitably fattened, by its parents, for up to ten days before it flies off to sea.

In his 1746 The History of St Kilda, the Rev Kenneth Macaulay wrote, ‘So exquisitely nice are his feelings and so strong his resentment, that he conceives an unconquerable aversion for his nest if one breathes over it and will never pay it any more visits.’ Adults and chicks protect themselves by projectile-vomiting a disgusting oil, impossible to cleanse from clothes and potentially fatal to predators, fouling their feathers – hence ‘fulmar’ from Old Norse fúll már (foul gull).

Until 1878, St Kilda, 40 miles west of the Outer Hebrides, was the only fulmar colony in the British Isles. From the 17th century, the bird replaced the gannet as the islanders’ mainstay, providing more palatable meat, feathers for bedding and oil for lamps and healing wounds. The monopoly ensured a mainland income.

Charles Maclean, in Island on the Edge of the World: The Story of St Kilda, quotes an 18th-century islander – ‘Deprive us of the Fulmer, and St Kilda is no more’ – and from an old St Kildan love song:

She: Thou art my handsome joy, thou art my sweetheart,

Thou gavest me the first honeyed fulmar!

Fulmars are not gulls but petrels (Tuberidae – ‘tubenoses’) – the bird family least tied to land. The tubes protect their nostrils from seawater and allow them to eject excess salt. Fulmars save energy by barely moving their wings in flight. This mastery distinguishes them from more flapping-inclined gulls. Their diet, chiefly krill (planktonic crustaceans), is the same as whales’. The birds acted as guides to the old whalers and would gorge themselves on the offal from a kill.

They can survive many years – 40 is the record. The British population is estimated at 680,000.

Bird of the Month: Sparrow