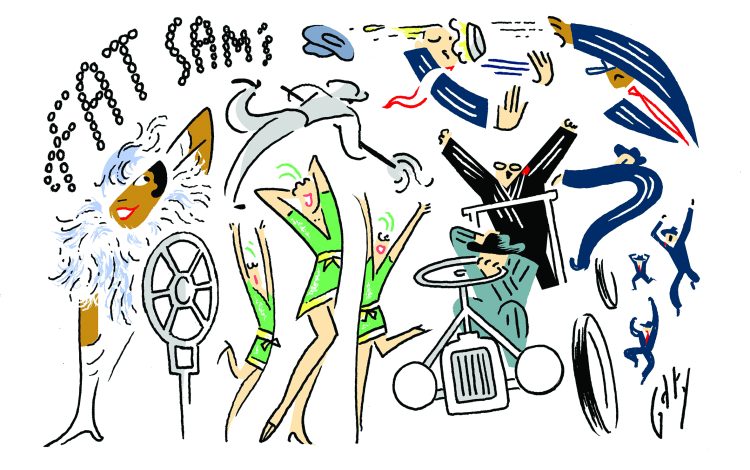 William Cook was 11 when he saw the original film of Bugsy Malone (1976) - and it was love at first sight.

For the benefit of anyone who’s been living in North Korea for the last 45 years, Bugsy Malone is an affectionate parody of American gangster films of the 1930s and 1940s, the films Bugsy’s British writer and director, the late Alan Parker, grew up watching on Saturday mornings in the 1950s.

That genre has been parodied countless times, both before the film and since, and most attempts have been eminently forgettable. Parker’s genius was to recast his tongue-in-cheek homage with children instead of adults.

As the film’s star, Scott Baio, observed, Bugsy Malone was the ultimate kids’ fantasy: ‘You get to dress up as a gangster, you get to shoot guns that fire whipped cream, you get to drive cars with pedals that look like real cars…’

I wanted to be Scott Baio, I wanted to marry his twelve-year-old co-star, Jodie Foster (I wonder what became of her?) and I wanted a machine gun that fired whipped cream. Sadly, none of these dreams came true.

After Bugsy Malone, adulthood is a bitter disappointment, but Alan Parker’s prohibition pastiche hasn’t soured in the slightest. My children loved it, and I’m sure their children will love it, too. Yet the version my kids are most familiar with isn’t Parker’s movie, but the stage show.

Bugsy seems like such a natural fit for the theatre that you might assume that Parker originally wrote it for the stage. Yet for many years he was ambivalent about the idea of a theatrical version of his debut movie. God knows why. It has everything a decent stage musical requires: goodies, baddies, a likeable hero and a lovable villain, a femme fatale and countless comic turns.

Thankfully, Parker succumbed and wrote a theatrical adaptation, retaining most of his original screenplay, seasoned with salty one-liners – the kind of wisecracks James Cagney and Humphrey Bogart used to make before they shot the mobsters or snogged the broads. And to top it all, there’s that wonderful score by Paul Williams. Every song plays like a top-ten hit: Fat Sam’s Grand Slam, You Give a Little Love, So You Wanna Be a Boxer…

Unlike Parker’s movie, this stage show isn’t entirely performed by children. Although the leading roles are played by kids, the ensemble players are (young) adults. On paper, this sounds bizarre, but on-stage it works a treat: the seasoned professionalism of the chorus drives the show, and the fragile innocence of the leading players gives it tenderness and pathos.

As in all professional productions, the children’s roles are shared between a rotating cast of child actors. So there’s not much point my telling you all that much about the particular performances I saw, when you’ll stand an only one-in-three chance of seeing those particular players. Suffice to say that the leading players I saw were all charming, especially Albie Snelson and Desmond Cole as rival mob bosses Fat Sam and Dandy Dan, and I’d be surprised if the actors they’re alternating with aren’t just as good.

The fact that the acting is so accomplished, right across the board, is down to director Sean Holmes. This isn’t a rag-bag of individual turns. These actors are all acting for one another. His production rattles along at a terrific pace – at two hours, including the interval, it isn’t a minute too long. Yet Holmes still finds room for light and shade, and some lovely self-deprecating humour. It never gets too slick or sassy – he lets the personalities of these children shine through.

I went to see it with my friend’s teenage daughter, and she loved it. She said she liked the car chase best. My favourite bit was the finale, a riotous curtain call, in which the cast all let their hair down. Is there anything more uplifting than watching children having fun?

It reminded me how it felt to see the film that first time, all those years ago. Now where can I buy a splurge gun? Radio: Too much #MeToo?