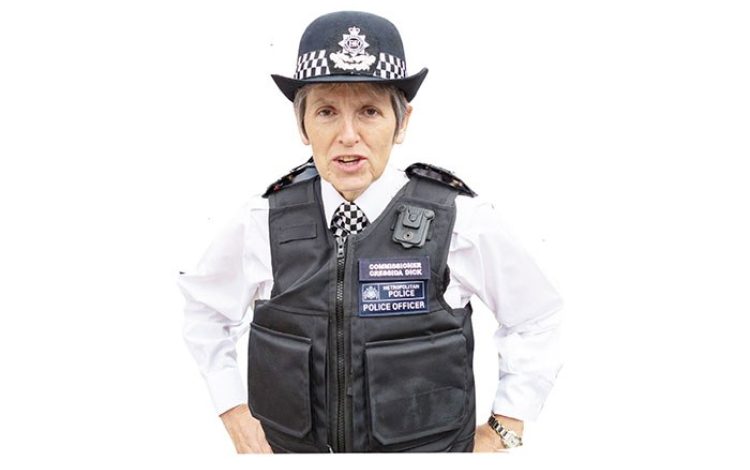 The ex-Met Commissioner, Cressida Dick, is devoted to my hero, Oscar. By Gyles Brandreth

I have a soft spot for Dame Cressida Dick, the latest head of the Met to become unsaddled in post – for a special reason: we have a mutual interest in Oscar Wilde. I am president of the Oscar Wilde Society and she shares a birthday with him: 16th October.

It was the men from the Met, of course, who arrested Oscar Wilde in 1895. In 2017, 120 years after Wilde’s release from Reading Gaol, I invited Cress (as colleagues call her) to propose a toast to his memory at a drinks party in his honour. She came with her partner, Helen. I think they had thought of announcing their engagement that night. They didn’t, but the evening was memorable all the same.

‘We cannot change the past,’ said Britain’s most senior police officer, looking out over a sea of upturned faces – many those of men old enough to have known the time when expressing their sexuality would have made them liable to arrest and imprisonment – ‘but we can look to the future and hope that it is one that is kinder, fairer, more tolerant, more loving, more humane.’

It was a strange and moving moment when the head of the very organisation responsible for Wilde’s arrest said in a quiet, firm voice: ‘As the Metropolitan Police Commissioner, I am proud to invite you to raise your glasses in a toast to the memory and genius of Oscar Wilde.’

Formerly the Chief Constable of Leicester, Mark was brought in ‘to clean up the Met’ in 1972 – and he succeeded. He was a friend of my father’s and I remember my dad taking me to lunch with him at New Scotland Yard.

Fine wine was served (that wouldn’t happen now) and, after lunch, Sir Bob took us on a tour of the Met’s celebrated Black Museum (they don’t call it that any more). Started in the 1870s, the museum featured everything from Victorian swordsticks to the hangman’s nooses used in the execution of assorted murderers of note and the revolver used by Ruth Ellis, the last woman to be hanged in England.

I realise now that my father must have known Bob Mark quite well. In the early 1970s, my parents lived in a block of flats above Baker Street tube station. It was just round the corner from the scene of the notorious Balcombe Street siege, in 1975, when four members of the Provisional Irish Republican Army held an innocent couple hostage for almost a week.

When my father saw the Met Commissioner on TV, arriving to take command of the situation, he said to me, ‘Come on, boy.’ He marched me round the corner, ducking under the police barriers, and announcing to every officer who tried to stop us, ‘Friends of the Commissioner – laissez passer!’

Incredibly, we got through the cordon and right up to the Commissioner who allowed us a ringside seat for the climax of the drama: the surrender of the four IRA terrorists and the release of their two hostages.

Incidentally, the four IRA men, part of an active service unit involved in a sustained bombing and murder campaign across London, served 23 years in English prisons, before being transferred to a jail in Eire in 1998.

Gerry Adams called them ‘our Nelson Mandelas’; they were released as part of the Good Friday Agreement in 1999.

By coincidence, there is another Irish revolutionary who shared a 16th October birthday with Oscar Wilde and Cressida Dick – and that’s Michael Collins (1890-1922), commander-in-chief of the Irish Free State army until he was killed in an ambush a century ago, towards the end of the Irish civil war.

Some days (like 8th March, the day on which I was born) don’t seem to have any notable births. Others are awash with them. Two of my favourite actors are also 16th October people: Dame Angela Lansbury, born 1925, and Peter Bowles, born 1936.

Peter, a friend and neighbour for 40 years, trained at RADA. While he was there, he shared a flat with his contemporary Albert Finney. Late one night, so Peter told me, the two young men fell to talking about the part each would most like to play. Both, it turned out, aspired to play Macbeth.

Albert asked Peter how he would approach the part. Peter told me, ‘I went on about Scottish history, the possibility of playing it with a Scottish accent, probably in a kilt, and how I would study all the great scholars, including Granville Barker.’

‘How would you approach it, Albert?’ Peter asked his friend.

‘I’d learn the fucking lines and walk on,’ said Albert.

Gyles’s memoir, Odd Boy Out, is out now (Michael Joseph)

Gyles Brandreth - I’ve given up telly – except for one show