Did I cook Boris’s goose at the Garrick? By Stephen Glover 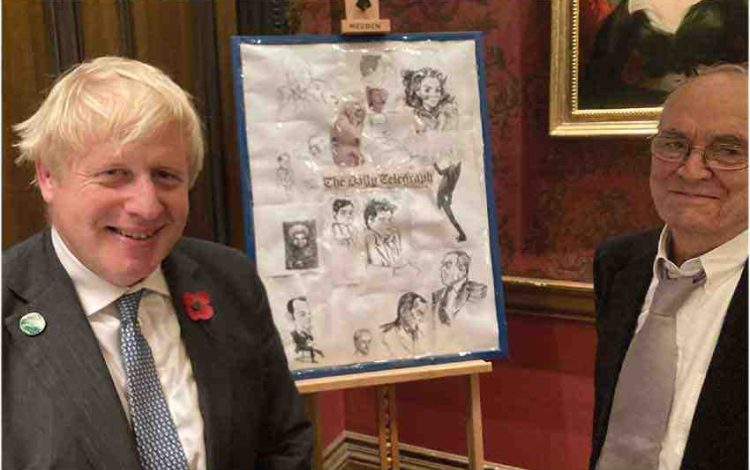 The truth about Stephen Glover's dinner with Boris Johnson – which, critics say, might bring down the PM

Am I responsible for the political downfall of Boris Johnson?

Readers may recall an item in my column in the December issue about a dinner I organised with my friend Neil Darbyshire at the Garrick Club. The guests were people – mostly men, but a few women – who have written leaders over the years for the Daily Telegraph. The Prime Minister was among them.

This dinner has given rise to some wild stories now accepted as fact. It is almost universally believed that, in the course of it, Boris had his ear bent about the Tory MP, Owen Paterson. He was allegedly persuaded, in particular by the journalist Charles Moore, to exempt Mr Paterson from a disciplinary process in the Commons, and set up an alternative system. The scheme blew up, Mr Paterson resigned and the PM was accused of sleaze.

On the Left, Marina Hyde has written in the Guardian of a ‘fateful repast’ during which the ‘mid-Mesozoic influencer Charles Moore cemented a plot to stop Owen Paterson – rule-breaking MP for ultrasafe North Shropshire – from having to serve a mere 30-day suspension from Parliament’.

Columnists on the Right have made similar accusations. Matthew Parris wrote in the Times of ‘a convivial dinner with Brexiteer Moore [who] stiffened [Johnson’s] resolve’. Andrew Neil declared in the Daily Mail that ‘there would never have been a by-election [in North Shropshire] in the first place if Boris hadn’t listened to a bunch of Tory toffs who urged him over dinner in the snooty all-male Garrick club to intervene to save their mate Owen Paterson’.

For a time I went along with this version of events in a rather lazy way. I had deliberately put myself far away from Boris, and so didn’t hear his conversation with his neighbours. However, I knew he was seated opposite Lord Moore, who three days earlier had written an impassioned defence of his friend Paterson in the Daily Telegraph. What could be more natural than that Moore should try to convert the PM to his cause?

Except that what may seem natural does not constitute proof. Having made extensive enquiries, I am as sure as I can be that neither Moore nor anyone else used the dinner to buttonhole Boris.

My first witnesses are those who sat on either side of the Prime Minister. Dean Godson and Harry Mount (editor of this magazine) can recall no conversations about Paterson, though they can’t rule out that one took place while they were speaking to someone else. What is certain is that neither of them would have wished to persuade Boris of Paterson’s innocence.

Moore, whom I have known for more than 40 years, though he could scarcely be described as a friend, is my chief witness. I know he would not lie to me. He says he did not at any stage during the dinner attempt to persuade the Prime Minister of the rightness of Paterson’s cause, and no conversation on the matter took place.

I accept that some may be less inclined to take Moore’s word than I am. If so, they should consider a further point. He says that when he arrived at the dinner, he already knew that the Government intended to give its backing to Tory MPs fighting Paterson’s corner and set up new disciplinary arrangements. He adds that he briefly told the Prime Minister of his pleasure at this development when he saw him at the Garrick.

The dinner took place on Tuesday 2 November, and Boris left around 10 o’clock. That morning, the Leader of the Commons, Jacob Rees-Mogg, had expressed the view in a podcast for Conservative Home that the system which had found Owen Paterson guilty of lobbying, and deprived him of the opportunity of calling 17 witnesses, was defective.

In other words, hours before the dinner, the Cabinet Minister responsible had intimated that the Government would support Tory MPs rallying to Paterson’s cause. The die was already cast. By the way, I should say that in my view Moore’s journalistic defence of Paterson was misguided, and the Government was wrong to try to change the system. But that is another matter.

Another myth was created by that dinner. The New European – an obscure anti-Brexit newspaper – has alleged that Johnson joked about feeling ‘buyer’s remorse’ at having married Carrie Symonds, causing ‘a number of raised eyebrows around the table’.

This is untrue. I can’t exclude the possibility that the PM said this to one or two people, though it seems unlikely. But there was certainly no general statement to this effect capable of raising eyebrows. Boris didn’t mention Carrie in his speech – the only occasion he addressed the gathering. I can confirm this because a recording exists, made by Neil Darbyshire for his wife, a Boris fan.

So I can’t claim any part in the Prime Minister’s downfall. It was a wholly innocent, quite enjoyable dinner about which a lot of rubbish has been written. I might add that Boris Johnson is the only guest who has not paid his share, and that three of his police bodyguards wolfed sirloin steaks at my expense.

My great escape... from hospital

No hope and no glory for the Beeb - Stephen Glover

Media Matters: On paper, yes, it’s all over. But is it?