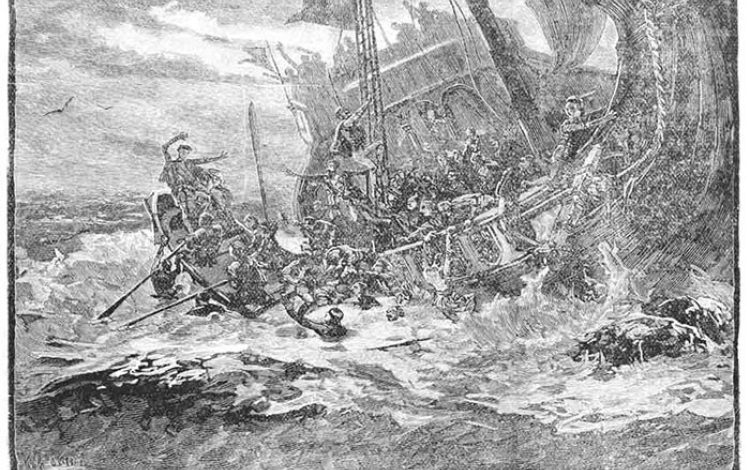 Earl Spencer joined the expedition to find the White Ship, which went down in 1120, with disastrous effects for the monarchy

To the south coast, for a quick flit across to the Normandy coast - precisely 77 years and two days after my father landed there on D-Day-Plus-One. I’m not a lieutenant in a Sherman tank, of course, but a historian on a mission: to try to locate anything that might remain of The White Ship - “the medieval Titanic” - whose tragic sinking changed the course of history by depriving the Normans of William Ætheling, the sole legitimate heir to the English throne. Carnage ensued, out of which the Plantagenets took possession of the crown for more than 300 years, till the Tudors saw them on their way. We set off for Normandy in June in glorious sunshine, with the Channel still as a millpond. Three and a half hours later we arrived off the port of Barfleur, and saw the brooding Quillebœuf Rock that - 900 years ago last November - holed The White Ship.

The collision sent the 300 passengers (including three of Henry I’s children, and the flower of the Anglo-Norman aristocracy) and 50 crew tumbling into the icy waves: none of them knew how to swim, and only one man - a butcher - survived, by scrambling onto a piece of broken mast.

Our divers were somewhat better prepared, and equipped. We’d worked out where any wreckage from nine centuries back might lie. The divers soon found a three-yard strip of ancient shipwreck, with a combination of metalwork on it that would fit with a vessel made in 1100 or so. A cheer went up when they surfaced with the news. We now await confirmation of the initial, extremely upbeat findings. It would be amazing to truly reconnect with the tragic vessel that brought England its worst ever maritime disaster.

Meanwhile, we prepare for a return of day visitors to Althorp. Last year we were able to open up only the gardens. Now, we hope we can welcome back those who want to look around the interior of the house, on 60 days in July and August.

My father taught me that those who choose to come to your home for an afternoon should be treated as welcome guests – not merely tolerated as paying visitors. It’s a thoroughly good point, and one we pass on to the house-opening team annually.

My father imparted another pearl of wisdom: ‘Long after they’ve forgotten the van Dycks, people who’ve visited Althorp will remember how good their cup of tea was, and how clean the loo was.’ He was again correct. The essentials of life never change.

Our most celebrated resident at Althorp – thanks to social media – is Tim the peacock. He has a younger would-be rival – Jim – but Tim is still very much in charge, his resplendent plumage on frequent display now, after the arrival of three young peahens.

These reinforcements are good news for the guinea fowl and chickens; they were becoming increasingly nonplussed by Tim’s whirring fantail, which he insisted on showing off to them when his pea-harem was low in numbers. It was all rather lost on the other breeds.

But Tim carried on regardless, betraying that his beauty isn’t matched by brains. He frequently attacks his own reflection, when he spies it in the sheen of our car. It’s an excuse not to have the thing overly clean, because Tim does proper damage to the paintwork – and to himself – when seeing off this mirage of a rival.

Returning to archaeological matters, I’ve long wanted to find the ancient village that existed at Althorp at the time of Domesday Book, in 1086. Ulla’s Thorpe was in the park here until, my grandfather would tell me, it was wiped out in the 1340s by the Black Death. With the apparent success of the dive for the White Ship, it’s time to get out the metal detector, and dig for this Anglo-Saxon settlement that gave Althorp its name.