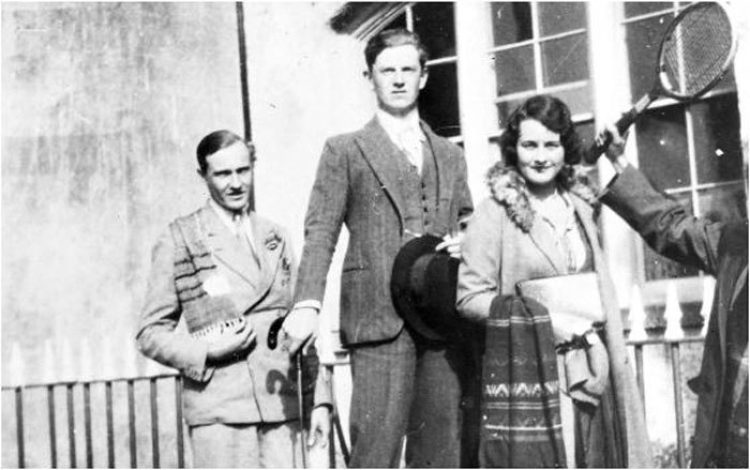 It was in January 1944 that Evelyn Waugh managed to procure three months’ unpaid leave from the army, in order to begin work on what is regarded by many, myself included, as his finest novel, Brideshead Revisited.

At that particular period, Waugh had little to do. Nobody seemed to want him. The war was going on elsewhere, and the jobs he had hoped for in his brigade had been allotted to others, his commanding officer explaining that he was so unpopular as to be almost unemployable.

Thus it was that he found himself staying at a small hotel in a Devonshire village, writing about a world far distant from the grim austerity of wartime Britain.

The book took him only five months to complete. For 6th June 1944, his diary entry reads: ‘This morning at breakfast the waiter told me the Second Front had opened… My only fear is lest the invasion upsets my typist at St Leonard’s, or the posts to him with my manuscript.’

An extraordinarily perceptive recreation of a vanished world, Brideshead conveys Waugh’s romantic veneration both for the aristocracy and for an English Catholicism for centuries sheltered and nurtured by the old recusant families. It also brilliantly displays his lethal wit and a remarkable perspicacity in depicting his characters, many based on people he knew.

The book begins during the war, with Charles Ryder arriving with his regiment at a camp set on an abandoned country estate. Ryder’s sudden recognition of the now deserted great house, Brideshead, brings back memories of his earlier years and of the family, the Flytes, who had become the centre of his existence.

The story then goes back a couple of decades to the period when Ryder, as an undergraduate at Oxford, meets Sebastian, the younger son of the aristocratic Flyte family, recent converts to Roman Catholicism. With Sebastian, charming, childlike and with no sense of direction, Ryder forms a close and enchanted friendship, Sebastian in almost every respect an image of Waugh’s own friend and lover from his university days, Alastair Graham. (In the manuscript of Brideshead, Alastair’s name appears inadvertently from time to time in place of Sebastian’s.)

Alastair, like Sebastian, was Catholic, also from an aristocratic family, although one of rather lower status than the much grander Flytes. Sebastian shares Alastair’s whimsical charm, his girlish good looks, his air of decadence and melancholy and, crucially, his addiction to drink.

Alastair ‘had no repugnance to the bottle’, as Waugh put it; and it was a letter of Alastair’s that inspired the scene in Brideshead where Ryder and Sebastian drive off for a picnic.

‘I have found the ideal way to drink Burgundy,’ Alastair had written to Waugh. ‘You must take a peach and peel it, and put it in a finger bowl, and pour the Burgundy over it. The flavour is exquisite.’

In Brideshead, Sebastian says seductively to Ryder, ‘I’ve got a motor-car and a basket of strawberries and a bottle of Chateau Peyraguey — which isn’t a wine you’ve ever tasted, so don’t pretend. It’s heaven with strawberries.’

Just as Sebastian ends up a hopeless alcoholic, so did Alastair, spending his later years not in a monastery in Morocco, but living as a recluse in a small village on the Welsh coast.

Another friend of Waugh’s who shared certain qualities with Sebastian was Hugh Lygon, younger son of Earl Beauchamp. The Lygons lived at Madresfield, a large house at the foot of the Malvern Hills, where Waugh was often invited to stay. Hugh’s elder brother, the charmless Lord Elmley, is a mirror image of the equally charmless eldest son of the Flytes, Lord Brideshead.

And the two families were involved in similar scandals. In the novel, Lord Marchmain leaves his wife and children to live abroad with a mistress, while Lord Beauchamp was forced to leave England because of rumours about his homosexuality, energetically spread by his brother-in-law, the Duke of Westminster. Westminster had always been jealous of Beauchamp’s distinguished career. Although Beauchamp had fathered seven children, the Duke claimed to be outraged by his brother-in-law’s predilections – which, according to the gossip of the time, first came to notice at Madresfield through the heavy clunk of the footmen’s bracelets as they changed the plates at dinner.

Unlike the Flytes, the Lygons were not Catholic, although the Catholic chapel at Brideshead as described in the novel is identical in almost every detail to the art-nouveau chapel at Madresfield.

For Waugh, who had ‘gone over’ in his late twenties, his Catholic faith had become both the centre of his life and focus of his art. The Roman Church, in whose teaching despair was regarded as a mortal sin, offered him a safe and solid structure, a discipline and an ordered way of life, which once adopted held out a clear prospect of salvation.

As Sebastian explains to Ryder, Catholics are not like others, ‘particularly in this country where … everything they think important is different from other people’, an esoteric elitism that naturally appealed to Waugh.

The powerful, underlying theme of Brideshead is one of Catholic revelation. Ryder, the convinced atheist who impatiently condemns Catholicism as ‘mumbo-jumbo’, suddenly towards the end finds redemption as he enters the chapel. A lost soul is brought to God by means of the unseen hook and invisible line, the twitch upon the thread.

At the time of the novel’s publication, 75 years ago, on 28th May 1945, its critical reception was far from entirely favourable. A Labour government was about to be elected in July, a social revolution was under way, and much was being written in the daily press, enthusiastically promoting the age of the common man.

At such a time and for many people, the patrician setting of Brideshead rankled. In some indefinable way, it was considered morally reprehensible to write about the family of an English marquess.

The aristocracy was not ‘real’ in the good, honest way the lower, and even middle, classes were ‘real’. Henry Green, writing about servants and factory workers, was more in touch, more true to life, than Evelyn Waugh writing about the nobility.

This view was expressed by, among others, Edmund Wilson in the New Yorker, who wrote that ‘Waugh’s snobbery, hitherto held in check by his satirical point of view, has here emerged shameless and rampant’.

But, as Waugh himself stated, he had no interest in the working class: the crucial point, surely, was, he said, that ‘The novelist deals with the experiences which excite his imagination… Class consciousness, particularly in England, has been so much inflamed nowadays that to mention a nobleman is like mentioning a prostitute 60 years ago… I reserve the right to deal with the kind of people I know best.’

Despite such disapproval, the novel was an immediate success both in Britain and in the United States. Henry Reed in the New Statesman declared Brideshead ‘a fine and brilliant book’, while Wilson in the New Yorker predicted that the novel ‘will prove to be the most successful, the only extremely successful, book that Evelyn Waugh has written’.

In this judgement he was probably correct. Brideshead became a Book Society choice in England and Book of the Month in America, quickly selling over half a million copies, bringing Waugh not only fame and fortune but a new-found status as a literary celebrity, a reputation that now, decades after his death, continues to grow.

A care home can be where the heart is

The Hell of being put on hold – Sam Llewellyn