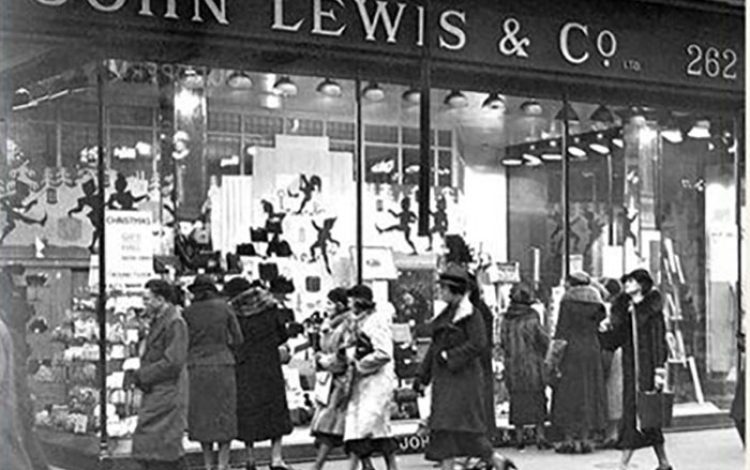 The original John Lewis, born in 1836, was apprenticed to a draper in Shepton Mallet, Somerset, but the hero of the story is Spedan, his son . By Valerie Grove

It already feels like a world ago that I last wandered through the haberdashery section of John Lewis, confident that one would never be knowingly undersold.

The nation’s favourite department store is now in limbo. Its CEO, Dame Sharon White, is closing stores and moving into the property sector, building 10,000 rentable homes. So Victoria Glendinning’s ‘intimate history’, inspired by a moment of curiosity under Barbara Hepworth’s Winged Figure in Oxford Street, could hardly be more timely.

The original John Lewis, born in 1836, was apprenticed to a draper in Shepton Mallet, Somerset. Glendinning lived nearby – so her narrative is laced with an occasional dig at the ‘1970s architectural statements gifted to the town by the Showering family of Babycham fame’.

John Lewis grew up to be cultivated (opera, theatre, Lord Byron) and steadfast. His first sweetheart, Nelly Breeks from Cumbria, was too good for him (the Breeks family thought) but he never forgot her, and built her memorial, even though she had ended her days in Mrs Theobald’s House for Inebriates.

Lewis paid promptly and banked every penny. He did not advertise (quality and service spoke for themselves) and went to prison rather than succumb to his landlord Howard de Walden over the restoration of his side of Cavendish Square. When a fellow draper, Peter Jones, died, having just lit his grand shop with electricity, John Lewis strode along to Sloane Square with £20,000 in his pocket and snapped it up.

He married the daughter of another Somerset draper, a Girton girl who opted for motherhood and was crushed by it.

They bought Branch Hill Lodge, Hampstead, and renamed it Spedan Tower – apparently after a kindly aunt, Ann Speed – and gave their first son the same peculiar name. John Spedan Lewis and his brother, Oswald, both tall and handsome, went to Westminster School and were destined to tussle with their ageing father – who lived to be 92 – over boardroom matters.

The hero of the story is Spedan, who threw his energy into the shop’s unique selling point – the paternalistic notion of ‘partnership’. After William Whiteley was shot dead in his shop in 1907, leaving £1m in his will to provide retirement homes for his staff, the Lewis brothers decided to create a country club for their senior salespeople.

Spedan had read William Morris and perceived that if shop workers were happy and exuded cheerfulness, they would be more productive.

‘This was and remains obvious,’ as Glendinning says. Hence those smiling, helpful assistants.

Spedan began recruiting Oxbridge graduates – one of whom, Beatrice Hunter of Somerville, became Mrs Spedan Lewis. ‘I wish he weren’t so rich but no doubt I will get used to it,’ she wrote piously. Profit-sharing made the partnership morally acceptable.

Spedan, unlucky in his children (a son died at nine, a daughter drifted away), ‘lived and breathed the Partnership’. He lectured and wrote proselytising books on ‘Partnership for all’, keeping three secretaries busy seven days a week, taking dictation. They were rewarded with riding and driving lessons, and outings to Glyndebourne, where Spedan was a keen patron. (During Glyndebourne’s wartime closure, he sat impresario Rudolf Bing at a desk in Peter Jones, advising ladies on how to spend their clothing coupons.)

One of Spedan’s shrewdest moves was buying up the shops owned by a Mr Waite and a Mr Rose, offering ‘wholesome food in clean surroundings’.

North London still mourns its indispensable John Lewis offshoots John Barnes and Jones Brothers – though both still thrive as the sites of gigantic Waitroses. So this engrossing tale of a shopkeeper and his family, from expansive entrepreneurship to the pandemic-related crisis of today, reflects our social history, as well told as it can be by a first-rate biographer with a name as dependable as her subject’s.

By chance, this book arrived on my doormat along with a card. ‘You’ve earned a reward, Valerie,’ it said. ‘Your shopping at John Lewis in the last 90 days would have earned you 1,091 points – if only you’d paid with a Partnership Card.’