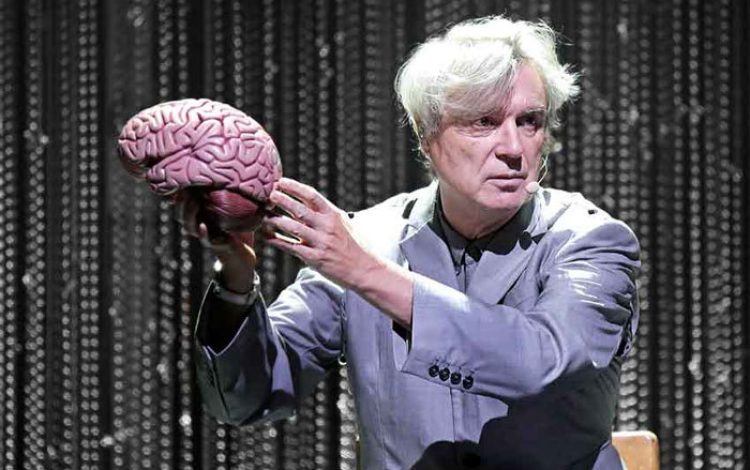 I have been chasing David Byrne all over the world all year.

I’ve tried several times to catch his stage show, American Utopia, but missed. And then – ta-da, synchronicity – I am in New York for its triumphant Broadway home run.

Byrne, 67, walks barefoot on to a minimal set, where a pink plastic brain sits on a table. He is white-haired in a crumpled grey suit. Is the icon of modern alienation going to deliver Hamlet’s soliloquy?

No. The first thing the former Talking Heads lead singer does – and imagine being so cool for so many decades; the effort he has put in – is to suggest, as if he’s thought about this and many other things deeply, that we put down our phones.

Other members of the band, also barefoot, also in grey suits, wander on. Some sing and some dance; most play hand-held instruments.

There are no trailing wires. There are no amps. There are no sound stages; no stadium-rock whistles and bells. There is only the rainbow band (‘I was born in Scotland; we are all immigrants’) in their grey suits, from many countries, the music, the dance and the song – and it is more than enough.

Byrne explains. ‘What people like looking at most is other people.’

It is a concert precision-tooled for the age of Extinction Rebellion, Never Trumpers and Greta Thunberg. It is grey, polished and whole, like a perfect pebble.

And yet it was also the most dazzling concert I’ve ever been to. Everything you ever wanted is there.

Along with the worshipful audience, I rose to my feet to sway and nod my head as the greatest hits flowed forth. Burning Down the House. Once in a Lifetime.

The man who St-Vitus-danced in a giant cream suit in the Jonathan Demme film Stop Making Sense has turned elder statesman, who told us to register to vote and that Black Lives Matter (as the show came to a close he sang a Janelle Monáe protest song.)

Yes, it’s a gig. But it is also philosophical treatise and cultural climacteric. The choreography is intricate; the lighting rhapsodic. I felt most of the time as if I wasn’t in Hudson Theatre off Times Square, but fully immersed in some avant-garde Tate Modern installation.

I was there. I’d fly almost anywhere – sorry, Greta – to see it again.