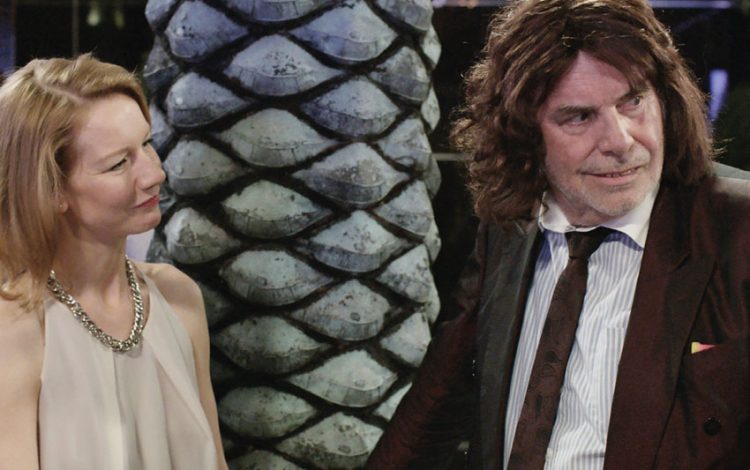 There are phrases in the language that don’t sit happily with me. Phrases such as ‘friendly fire’ and ‘working holiday’. Another is ‘German comedy’, which freezes the blood more efficiently than any old Hitchcock film could manage.
Toni Erdmann (15), I now realise, brings the number of German comedies I have seen on screen up to one. Have they not been released in this country before, or were they simply not very funny?
Peter Simonischek plays Winfried, a big, shambling, unshaven, middle-aged wreck of a man, perpetually puffing as he goes up stairs, and goes down them as well. We follow him to a family gathering at his ex-wife’s, where we see his only daughter, Ines, played by Sandra Hüller, a thin, washed-out thirty-ish woman who is working as a management consultant in Bucharest.
She is clearly a harassed, joy-free wage slave in corporate hell, too distracted to give her parents the time of day and prone to pretend to make mobile phone calls to avoid talking to them. Winfried reacts scarcely at all to his daughter’s distress, or maybe we are too distracted to notice it. For it turns out that he is that humour-free zone, a practical joker, who pulls out a pair of silly false upper teeth and inserts them in his mouth whenever he is going to do something daft.
This is, I think, where the patience of filmgoers will be most extended. The practical jokes aren’t funny — his ex-wife obviously divorced him because of them — and his lack of obvious emotional connection with the other characters just seems sad, a mark of terrible failure rather than anything else.
But in this slow and, it has to be said, very long film (162 minutes), we gradually see that Winfried is a kind
and rather gentle man, with subtle eccentricities rather than looming
mental illness.
On a whim, he follows Ines back to Bucharest and stays for a weekend, an agonising few scenes in which we see how sad her life is and how little he can do about it. When he is going home,
they stand at the lift door, waiting for
the lift with absolutely nothing to say to each other.
At this point, though, the film shifts from his point of view to hers, so it comes as something of a surprise when he turns up a few days later as ‘Toni Erdmann’, wearing his daft teeth and a silly black wig and constantly appearing when she least expects it.
Again, patience is required as you slowly realise that he is doing all this, behaving like a fool, for her benefit, and gradually it pays off. We are used to
films moving more quickly than this, and you might be surprised by a so-called comedy that doesn’t make you laugh at all for the whole of its first half. But it’s
so cleverly structured that the absolute hilarity of the last forty minutes or so makes complete sense. I thought it was
a wonderful film.
That said, I must quote my friend Tim, who admitted that he was completely baffled by it. ‘Never have I seen a film so determinedly uncinematic – not a single shot is framed with any regard for symmetry, colour, contrast or beauty... you should think at least twice before going to see this abomination of a film.’
I’d say that the film’s drab look is entirely intentional. But I’d also say that oldie filmgoers who like a slow burn of a film might like this, and that the phrase ‘German comedy’ should be considered an oxymoron no longer.