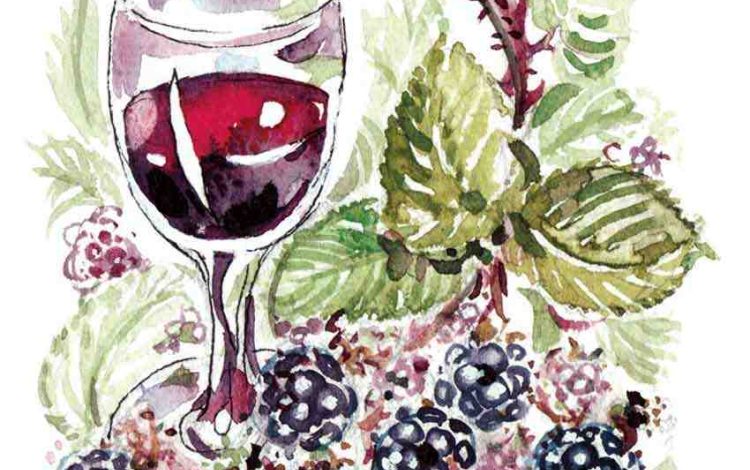 ‘There is nothing – absolutely nothing – half so much worth doing as simply messing about in boats.’ Wise advice from Ratty to Mole as they inspected the contents of the picnic basket while drifting among the willows in the wind.

Take a virtual drift along the canals of France with A Foodie Afloat, Di Murrell’s nostalgic memoir-with-recipes, with exquisite drawings by artist Kathleen Caddick. It’s a dedicated bargee’s account of a year’s intermittent chugging along the waterways that once linked the farmers and producers of southern Europe to the markets and industrial north. Those who piloted the great barges, pulled by shaggy-hooved horses along now-deserted towpaths, stopped for refreshment at every lock, a network of little pitstops where you knew just where you were from the menu du jour.

With the working waterways turned to recreational use – mostly by crazy Britishers – there are still pleasures to be had along the way.

Reblochon is the ‘correct’ cheese for this potato-and-onion gratin from Savoie. With nobody there to check for authenticity, feel free to make it with any of France’s smelly cheeses, including over-ripe Camembert or Brie. The recommended potato variety is Charlotte, and sliced mushrooms can replace the bacon. Serves 4, or 2 hungry bargees

Drain and pat dry. Melt the butter and oil in a roomy frying pan, and fry the onion and garlic till they start to colour. Add the lardons and fry for a minute or two. Add the potatoes, lower the heat and cook all gently together for about 20 minutes till the potatoes are soft. Add the thyme, wine and cream and bubble up.

Slice the cheese into strips (remove the rind) and lay the strips over the potato. Bake for 20 minutes or so, until the cheese has melted into the potato, leaving a golden crust on top.

Serve, for perfect regional authenticity, with a salad of purslane (duckweed) gathered along the towpath.

A ruby-red digestif adapted from a blackcurrant recipe in Jane Grigson’s Fruit Book, explains Di, a writer always careful to credit her sources.

Serve neat as an aperitif or an after-dinner tipple; or dilute with fizzy water and ice; or add to poached pears. Makes about 1.5 litres

Steep the fruit in wine for about 48 hours then liquidise the mixture and tip it into a basin lined with a clean cloth. Tie the ends of the cloth together and squeeze the liquid into the bowl. Measure the liquid, tip into a roomy pan and for every litre, stir in a kilo of sugar. Heat gently, stirring regularly to dissolve the sugar crystals, until it feels hot to the finger. Continue to simmer at the same temperature, stirring every now and then, for two hours, until the liquid is reduced and looks a little syrupy. Leave to cool, then stir in the vodka (proportions 1:3 vodka to syrup), bottle and seal. Ready in a week.