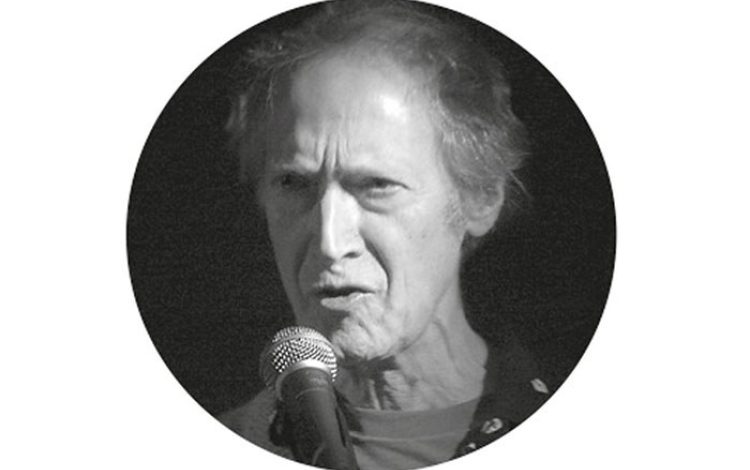 Michael organised the Wholly Communion poetry event that filled the Royal Albert Hall in 1965, featuring Allen Ginsberg and other poets. By James Hughes-Onslow

Vanessa Vie, partner and soulmate of the poet Michael Horovitz for the last 11 years, played the anglo-saxophone at his funeral in Kensal Green Cemetery.

‘Michael told me he once wanted to learn to play the saxophone, and failed,’ she tells me. ‘The kazoo was an easier option … easier to blow… Eureka! The anglo-saxophone was born.

‘It became his trademark, a mixture of a saxophone and a kazoo. He used it as a lyre to accompany his poems and jazz improvisations. And, of course, he used it when performing with me in a duo. We were each other’s muse.’

Michael organised − and performed at − the Wholly Communion poetry event that filled the Royal Albert Hall in 1965, featuring Allen Ginsberg and other poets.

Karyl Nairn recalled meeting him at the First International Poetry Day there, a cultural alternative to the 1996 Olympic Games.

‘In the 1960s, he was dubbed the world’s worst-dressed poet and he spent the rest of his life trying to live up to that. Mysteriously, when Michael wore his mismatched, bright colours, they never clashed. And those fluffy pink hats were misleading. There was nothing fluffy about him. He had a fierce intellect and an iron will.’

‘There were many Michaels,’ said his son, Adam, himself a poet. ‘There was the refugee child, youngest of ten siblings, who escaped Nazi Germany when he was two.

‘Though he was not a practising Jew, having (as he once joked to me) practised quite enough as a teenager, the faith he was raised in acted as a bedrock to all his adventures in life. He put his faith in poetry, and in people, in the beauty of languages and how it can effect change.

‘His was the Judaism of Woody Allen and Leonard Cohen, Chagall and Kurt Schwitters, Harold Pinter and Mel Brooks.

‘We had not seen each other during COVID, for nearly 18 months before his accident – the longest time in my adult life that we had been apart. The last time I saw him, on the penultimate day of his life, he clutched my hand and said, “I hadn’t realised until now how much I missed you.” ’

Donald Trelford - I Once Met... The Duchess of Argyll