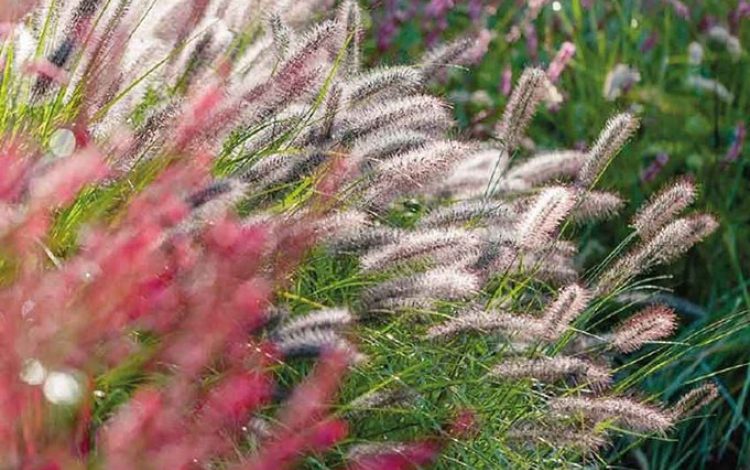 Lockdown travel restrictions have robbed me (and thousands of others) of visits to gardens throughout most of the year.

I now hanker to see Neil Lucas’s Knoll Gardens on the edge of the New Forest. It’s five years since I last wandered their sinuous gauzy paths, but memories remain fresh as the proverbial daisy.

I was a late convert to ornamental grasses, finally won over at Graham Gough’s nursery, Marchants Hardy Plants – a Sussex destination with the same pulling power as Glyndebourne (another loss this year) just a few miles away. Music and gardens. Glyndebourne has them both, but Graham too has music in his heart – his impromptu outburst of (unaccompanied) Schubert songs at an outdoor lunch for his 50th birthday a few years ago still rings in my ears.

Both Neil and Graham use grasses inspirationally, sewing them into borders where late-flowering perennials – goldenrods, rudbeckias, asters and a host of other so-called prairie plants – reach their peak, looped at this time of the year with gossamer cobwebs strung with crystal droplets of early-morning dew.

Should you find yourself close to the glorious South Downs, there’s a yet grander grassy fix to be had at Paul and Pauline McBride’s Sussex Prairie Garden where, intriguingly, over several flat acres, tension between formality and informality creates theatrical storms of animated colour.

Animation seems key to this kind of scheme. The meanest breeze will stir and twitch these mostly lanky-stemmed plants, delightfully blurring for a few seconds any sharp view of individuals.

Piet Oudolf’s name comes to most people’s minds when there’s talk of ornamental grasses and prairie flowers. He works internationally – most famously planting New York City’s High Line, a redundant stretch of elevated railroad extending now for almost two miles from West 9th Street to 34th Street. Oudolf’s own garden and plant nursery at Hummelo in the Netherlands is a showcase of personal inspiration.

But you needn’t venture across the water to see this Dutchman’s work. His signature is writ boldly in this country: in the old walled garden at Scampston Hall in Yorkshire, the Millennial Garden at Pensthorpe Natural Park in Norfolk, Trentham Estate in Staffordshire and in the grounds of Hauser & Wirth’s contemporary and modern art gallery in Somerset.

Should you venture that far south-west, make a day of it and visit the Newt – formerly Hadspen House – nearby. An altogether different and eye-opening gardening experience.

But back to Dorset, to Neil Lucas’s Knoll Gardens, right next door to the famed Trehane Nursery – first call for anyone wanting camellia or blueberry plants, and none too distant from Abbotsbury Subtropical Gardens, as resplendent as Neil’s garden at this time of the year.

In his book, Designing with Grasses (2011), Neil demonstrates the use of these ornamentals in various situations: borders and containers, dry and wet gardens. Such devotion to them triggered the Knoll Gardens Foundation in 2008, a charity he dedicated to refining and promoting a wildlife-friendly, naturalistic gardening style, using his garden as a showcase and base for experimentation.

It’s an admirable ambition and, knowing Neil as I do, admittedly less well than I’d like, I believe he’ll score triumphantly.

Restaurants: James Pebroke reviews The Square and Compass, The Salt Pig, and Parabola