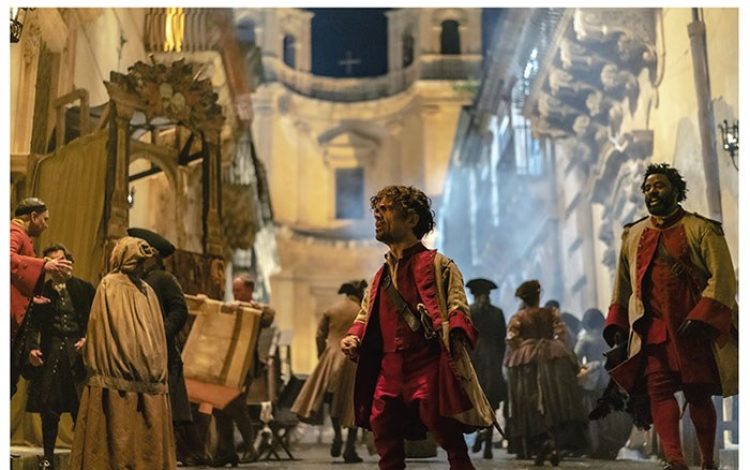 What a good idea it was to choose Peter Dinklage, the Game of Thrones star, to play Cyrano de Bergerac. By Harry Mount

In Edmond Rostand’s 1897 play Cyrano de Bergerac, Cyrano has an embarrassingly huge nose. This Cyrano is, like Dinklage, a dwarf. The two conditions are very different – but they produce the same acute levels of poignancy.

No one can furrow a brow or drip melancholy into the eyes as well as Dinklage. He subtly delivers the agony of being unable to announce his unrequited love to Roxanne – played by Haley Bennett with a charming display of understated, winsome sweetness. She instead falls for Christian – a dreary, one-dimensional Kelvin Harrison Jr.

But why, oh why did director Joe Wright let Dinklage sing? And sing a lot – much of the dialogue is simple, declaimed verse, much like the dialogue in Hamilton.

Dinklage is a terrific actor – and not a very good singer. But the modern cult of authenticity means he should sing badly rather than be well-dubbed.

That authenticity cult is riddled with contradictions. Dinklage recently declared that the Disney remake of Snow White and the Seven Dwarfs is unfair to dwarfs. In the remake, a Latina woman is playing Snow White, to break down stereotypes, but the dwarfs are still dwarfs, to Dinklage’s outrage. His stance against dwarfs playing dwarfs promptly led to a lot of cross dwarf actors worrying about losing their jobs playing dwarfs.

But surely, if you really want to be authentic, dwarfs must be played by dwarfs? What knots we tie ourselves up in to appear virtuous!

All that matters in a film is good acting (and singing), a good screenplay, a good director and good sets. Why wilfully deny yourself a shot at getting all these things right because of virtue-signalling?

The sets, though, are exceptional. Joe Wright wisely lets the baroque buildings of Noto, Sicily, and their honey-coloured tufa stone exert their own kind of romantic magic.

Wright grew up working at his parents’ puppet theatre, the Little Angel Theatre in Islington. Perhaps thanks to that, he is visually brilliant. In one scene, Cyrano goes off to war and is pictured silhouetted in black against a white background. The disadvantages of being a dwarf, up against much taller, faster-moving soldiers, are instantly and heartbreakingly revealed.

Joe Wright also has the gift of one of the great plots in the Cyrano story. The best stories – like the Iliad, the Odyssey or Shakespeare’s plots – are protean.

They can survive any amount of bending and playing around with – as long as their strong scaffolding is fleshed out with an impressive redecoration.

That hasn’t happened here. There is no tension, humour or real romance – beyond Dinklage’s fine acting of a lovelorn man – in the flat screenplay, written by Erica Schmidt, Dinklage’s wife.

There’s every reason to remake one of those brilliant stories. And there have been dozens of theatrical and screen adaptations of Cyrano de Bergerac – not least Gérard Depardieu’s heart-stopping turn in 1990.

But a new version must bring something new with it. My Fair Lady (1964) was, if anything, better than the original play, Pygmalion (1913). Oliver! (1968) may not have been better than David Lean’s 1948 film version of Oliver Twist – but it was still a sublime work of art, one of the great musicals and utterly different from earlier adaptations of the story.

This new Cyrano brings little to the story, except for Noto’s lovely baroque buildings. Even they can’t support such a weak screenplay.