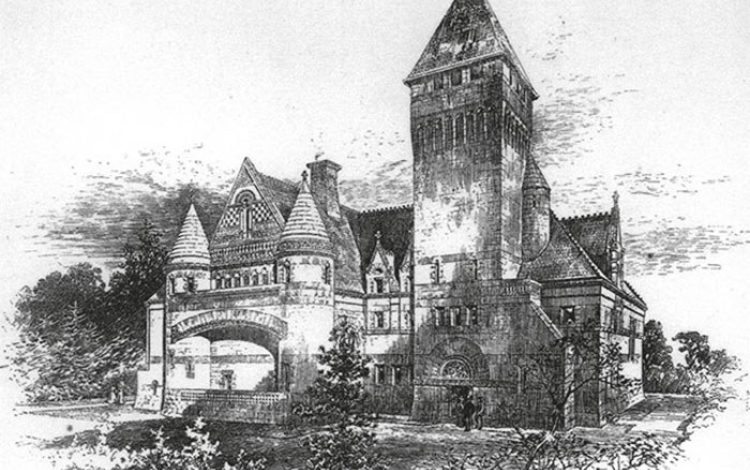 Like Citizen Kane, film mogul and artist Hubert von Herkomer built himself a fantasy schloss – in Bushey. By Lucinda Lambton

Like Citizen Kane, film mogul and artist Hubert von Herkomer built himself a fantasy schloss – in Bushey. By Lucinda Lambton

If there is another house as grotesquely and as gloriously exciting as Lululaund in Bushey, Hertfordshire, I will eat my hat, munching slowly and satisfyingly through the sheer delights of such a discovery.

It was built between 1886 and 1894, only to be quite shamefully demolished a few decades later, in 1939. How tearfully and teeth-grindingly enraged I lament its passing. Its magnificent front door and tympanum survive, giving a most tantalising glimpse of the degree of its alarming splendour.

It was a splendour every bit as noble as its creator, Bavarian-born Sir Hubert von Herkomer (1849-1914). He created paintings of considerable note and fame – think of The Last Muster with the fine old faces of the Chelsea Pensioners in the Royal Hospital’s chapel. Or there was Hard Times, the painting of an impoverished and homeless day labourer’s family collapsing by the roadside.

He was appointed Slade Professor at Oxford University in 1885, in succession to John Ruskin, and he composed a wealth of music to accompany his own avant-garde ‘pictorial-music-plays’ which he would perform in a theatre of his own design.

He also gave concerts playing on the violin or zither. A lecturer and teacher, he established an art school in Bushey – one of his ‘greatest schemes’ – and he wrote several books as well as umpteen articles. He was to end his working life as a pioneer film-maker on elaborate cinematographic productions, in a studio he designed and built himself. Before he died, Herkomer was about to make a film of Far from the Madding Crowd in collaboration with Thomas Hardy.

He was a man ahead of his time. He had a passionate interest in the motor car, owning a Daimler and writing prophecies on the car’s eventual power over mankind. In his painting The Future, a near naked, bosoms-to-the-fore beauty of a blindfolded woman is tied to the engine of an enormous motorcar. She cannot see what is coming – hence the blindfold – yet she is tightly tied to the engine that sweeps her forth unwittingly. Painted in 1905, it caused a sensation.

To top it all, Herkomer was a man who was as handsome as a man could be. I fear, though, that, by way of a flick of a flaw, modesty was by no means his middle name!

Of his humdinger of a house, he wrote, ‘A stranger of average intelligence and education, passing my house, involuntarily arrests his steps to contemplate what seems to him to be an unusual type of architecture. If he be an Englishman, his first formulated thought was that a house of such pretensions should stand in a park with a one-mile private drive up to it. To have built it within 30 yards of a public road, with front gates so low that almost a five-year-old child could look over them, suggests to his mind that only a foreigner or an eccentric would have spent so much money on a mansion that had practically no privacy attached to it.’

He was a foreigner and an eccentric, born into poverty in 1849 at Waal in the Kingdom of Bavaria. He was the son of Lorenz Herkomer, a woodcarver of exceptional ability. According to the pleasingly named publication Chums, ‘The boy went to school for a month or two and, falling ill, never returned.’

With hopes for a better life, in 1851 the family moved to Cleveland, Ohio, which they left after only six years. But the country left an indelibly important mark on the boy for the rest of his life. After triumphing in a multitude of dashingly imaginative endeavours in Germany and Britain, in 1899 he was ennobled by King Otto of Bavaria. For extra prestige, he added ‘von’ to his name. He was already a Knight of the Order of Merit of the Bavarian Crown. In 1907, he was knighted by Edward VII. He was already a Commander of the Royal Victorian Order.

For me, his commission to paint Queen Victoria on her deathbed had the most delightful results. Enveloped in clouds of white tulle, with arum lilies in abundance, along with a quantity of lilies of the valley, the queen lies in their midst, holding a tiny bunch of them, along with a little wooden cross.

Herkomer produced many memorable portraits of famed grandees such as John Ruskin – giving him a hauntingly beautiful face – and Henry Hobhouse Richardson, Lululaund’s American architect, the creator of the ‘Richardsonian Romanesque’ style throughout the United States.

Lululaund – named after his late wife, who was also his sister-in-law – is the only example of this work outside America, where it gloriously prospered with its rugged and richly varied rustication of colours and texture.

A handsome architectural amalgam of 12th-century southern French, Italian and Spanish Romanesque characteristics, the style took over much of the United States in towns great and small. It went as far west as Oklahoma in the early years of the 20th century, after which it died out. What a handsome addition Lululaund must have made to Bushey’s townscape. Herkomer loved his ‘fairy-tale castle’, as it was known locally. Having secured the services of the great American architect, he was determined to be the sole creator of Lululaund’s interior. Gold, blue and red were liberally painted on many of the richly carved wooden panels that smothered the walls, while his bedroom shone with a copper ceiling.

There were technically up-to-the-minute details in abundance, with hot and cold water in all the bedrooms and pathfinding electric light, from his own generator, blazing throughout.

Richardson had developed into a genial, monumental figure of a man, as can be seen in Herkomer’s portrait of him. He sits beaming with satisfaction, his great stomach filling a full half of the painting.

One of his most charming paintings is the triptych The Makers of My House, of three long-bearded prophet-like men: his father, Lorenz, and his brother, John – both woodworkers – as well as his second brother, Anton, a weaver.

Herkomer’s other most renowned works were his paintings of the poor. They wrenched the public consciousness with harrowingly revelatory scenes of the extreme deprivation of the people, barely acknowledged before by artists. Workhouses, queues for benefit payments, the bleakness of strikes … they all were his wretched fodder.

Another of his unexpected achievements was to fight for, design and pay for a house for Bushey’s first district nurse.

That he should describe what was then a remote Hertfordshire hamlet as ‘a sleepy little place’ is painful indeed. Today it is surrounded by the heaviest traffic of dual carriageways, roundabouts and whopping great factories, to a quite unbearable extent.

After Lululaund’s grimly sad demolition – thought in part to have happened because of its German connection – a mere fraction of its façade survives, with the richly caparisoned doorway and tympanum.

This remaining original fragment (pictured) now takes pride of place on a small block of the original house that has now been turned into flats.

To end on a sorry note, when Lululaund was demolished in 1939, its masonry went as hardcore for Bovingdon Airfield in 1941. I weep.