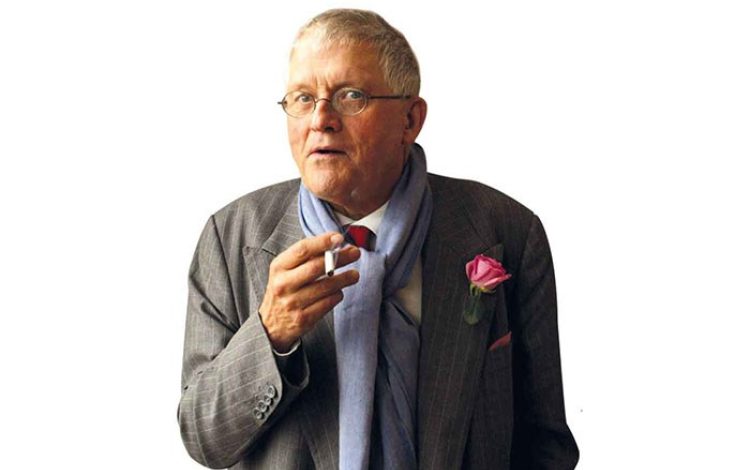 I’m not planning on going anywhere.

Is there something you really miss?

If I go anywhere, it’s always to work, really, now – and if I’m working, I don’t miss anything much [he chuckles].

We had only one holiday away – in Hull, with some relatives; otherwise we went on day trips to Morecambe or Blackpool.

Where do you feel happiest – Yorkshire, LA or Normandy?

Right now, in Normandy – we live here. There’s just three of us living in the house: me, JP [Jean-Pierre Gonçalves de Lima – Hockney’s assistant for 20 years] and Jonathan Wilkinson [a technical adviser].

Which has the best light?

They’re all different. In Bridlington, there was the reflective light from the sea, which was rather good light. And the light in LA is very, very good – very clear. But the light in Normandy is good – you get a lot more cloudy days, but it didn’t matter to me. I draw the dull light.

Why did you move to Normandy?

We drove to Normandy to see the Bayeux Tapestry and I said to JP it would be a great place to do The Arrival of Spring. I suggested we rent a house and we loved this place the moment we drove in – so we bought it.

I started drawing the winter trees and ended in June. There are 116 of them at the Royal Academy. With autumn, the leaves started falling off; I caught all that and finally finished the year in January with some snow. I’ve now made 220 pictures into one long picture (290 feet long), which will be exhibited at the Orangerie in Paris, and it’s like the Bayeux Tapestry.

It looks like Snow White and the Seven Dwarfs’ house, in the middle of the garden.

Is spring your favourite season?

Spring is when everything grows again and it’s a beautiful time here. The first spring I noticed was in 2002, when I was sitting for a painting by Lucian Freud and I walked through Holland Park every day. One day, I sat down on a seat because there were these black rabbits. I lit a cigarette and then some blackbirds came. And then three girls came running along and said, ‘Oh no, you shouldn’t be smoking.’ I thought, ‘Well, they’re obsessed with their own bodies. They hadn’t seen the rabbits or the blackbirds. They hadn’t seen anything and I thought, I’m healthier than they are, and smoked my cigarette…’

Do you still love smoking?

I think tobacco is a great gift to the world.

How has your art changed with technology?

Have you always loved terrific clothes?

I’ve just had seven new suits made in Caen. I don’t go out, but I dress up every day, put on a tie and sit and draw and paint.

No, it’s mostly white. I was watching television with this boy in 1961 and an advert came on and it said, ‘Blondes have more fun.’

How were you discovered? How did the Kasmin Gallery, founded by Sheridan Dufferin and John Kasmin, fit in? What was his wife, the painter Lindy Dufferin, who’s just died, like?

Kasmin started buying pieces of mine when I was in my second year at the Royal College of Art. So by my last year I was quite a rich student – I could buy cigarettes in packets of 20, not 10. Sheridan was Kasmin’s partner and I had my first exhibition there in December 1963. Lindy was 79 – a bit younger than me. She complained about my smoking but, anyway, I’m almost 85…

Do you love the French food?

Yes, we have tripe. It’s delicious. Andouillettes are marvellous.

Do you speak French?

Not really, no, but I don’t really have to talk much. I can’t really hear that well, anyway. I can hear you now because it goes through Bluetooth into my hearing aid. I think if you’ve got a purpose in life, that’s what really keeps you going – I know that. You can smoke, drink, do what you want. Monet smoked. He loved smoking and chain-smoked. He died at 86. Picasso, Matisse, Renoir, Van Gogh smoked.

I haven’t had a holiday for 50 years; if I go anywhere, I’m always drawing, painting. I’m just a worker, really.

I have to really travel with somebody now because I can’t hear the announcements in airports. I’m pretty deaf.

I don’t know about sex now [he laughs] – I’ve had enough, I suppose.

Not hier for the Bier