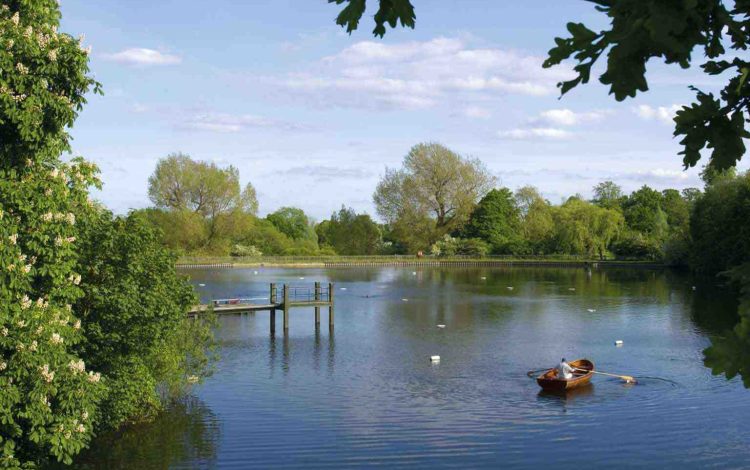 Hunter Davies has had a walking - and swimming - 60 year love affair with Hampstead Heath. And now he's written a new book, The Heath: My Year on Hampstead Heath

Let me take you on my daily walk across Hampstead Heath – a walk I have done for most of the last sixty years, man and boy groom.

I got married to the writer Margaret Forster in 1960, aged 24, and we moved into a flat right in the middle of the Heath, a little, hidden village called the Vale of Health. I was so proud, especially of the phone number HAMpstead 3847. Very posh. In those days, you could tell from a phone where someone lived.

In 1963, we moved to the other side of the Heath, when we bought a house with a sitting tenant, which was all we could afford. Cost us £5,000. I know – we paid too much. Whenever a new person moves into our streets, I let drop casually how much we paid, just to see them vomit on the pavement.

I just have one road to cross to get to the Heath. It takes me just five minutes and, oh joy, I am at once communing with nature, 800 acres filled with lakes, woods, trees and hills – London’s greatest natural treasure.

OK, it is not exactly the Lake District, where we had a country home for 30 years. But, if you pick your time and route, you can walk for three hours, see hardly anyone and only have to cross one road, convincing yourself you are in the real countryside, despite being only four miles from the centre of London.

This year, I have been able to look upon my long daily walk as work – I am doing a book about a year in the life of the Heath. I was well pissed off when lockdown came, thinking, ‘Oh God, the book will be all out of date.’ But now I realise it has given me an expected narrative: the Heath before and after lockdown.

Just before the lockdown, I was getting near the Men’s Pond, when I suddenly heard panting and someone running behind me. I turned round and it was a bride in full bridal regalia a young Chinese woman in her early twenties. About twenty yards behind, panting even more, was a young, handsome, Chinese man of about the same age, wearing smart black trousers and a sparkling white shirt. He was carrying his smart, black suit jacket carefully over his arm.

I asked the bride if she was in a film, as the Heath is such a popular location. She looked puzzled. They were just on their own. They had come on the bus to the Heath, which someone had told them was a lovely place to have wedding pictures taken.

They weren’t getting married till next year. They had just decided to have their wedding photos taken now, as the weather was so nice. I wished them luck with their wedding to be, and hoped they were still speaking in a year’s time. They laughed and dashed up Parliament Hill.

I stood for a while beside the Men’s Pond, where I swim most summers. It is even more popular these days, now that wild swimming is all the rage. The water is so green, cloudy, murky and horrible that I’m always surprised by just how many people swim there. I always worry that a giant pike will have a nibble at my willy.

I am also rather scared of the ducks. I swim in a large circle ,clock wise round the pond, going from lifebuoy to lifebuoy. I go mad if a duck is already on one of the buoys – so I shout at it angrily. No wonder it’s called wild swimming ?

It is, in fact, fresh running water, fed by the underground streams which flow into the old Fleet River, now buried beneath London, though remembered in local street names and in a primary school. And my old stamping ground, Fleet Street.

The Ladies’ Pond, three ponds further on is more attractive and secluded. Like the Men’s Pond, it has been a much loved open-air swimming place for nearly a century.

It opened in 1926. The general public were fascinated by the notion of women swimming in the open air. The media loved it, too, having an excuse to use photographs of women in bathing suis. Oooh, Ivy!

As early as l927, Pathé News made Lady All The Round the Year Swimmers, a film about a handicap swimming race. You can see women wearing bathing hats and voluminous costumes diving in on a freezing day.

At the entrance to the grounds of Kenwood House, I turned up the sandy path for a few hundred yards, stop in front of a small clump of silver birch trees, and sit down on MY SEAT.

I suppose I should call it OUR SEAT. My wife and I put it up in l985 on our silver wedding anniversary. The touching, tasteful little plaque says ‘ To Hunter and Margaret on their Silver Wedding ,June 11, l985 ‘ The situation, which we picked specially, has got a visual pun. Silver wedding – and silver birch trees. Gerrit?

My wife died in February 2016, but I am still alive, last time I checked. And I am still , as far as I know, the only living person with a memorial seat in the Heath. All the others are for the dead.

Kenwood is Hampstead’s greatest treasure of Hampstead Heath – a stunning mansion, built by Robert Adam in the 18th century, with an incredible collections of paintings by Gainsborough, Reynolds, Turner, Thomas Lawrence, Romney plus a Rembrandt self portrait.

And all this is tucked away in a corner of a public park. Sorry, we regulars never used the word park. Tut tut. It always the Heath.

The Pergola is another manmade treasure on the Heath, further on towards Golders Hill Park. You walk along the 900-yeard length of this masterpiece, created by the great landscape gardener Thomas Mawson for soap magnate Lord Leverhulme in 1925 just before his death.

On the way home, I go along the ridge towards Parliament Hill , from wherer you can wave at those poor folks stuck in the City skyscrapers.

I stop on a little hill known as Boudicca’s Mound, where the Iceni Queen is supposedly buried.

Years ago, when I and some other local dads began our own football team, Dartmouth Park United, we played every Sunday on the Heath and our goalposts were kept inside the iron railings on top of Boudicca. Hope she didn’t go wild.

Guess what was inside the mound just a few months ago? Sheep. It was an experiment, which went well, and now they are expected to return in September. One of my 200 old postcards of Hampstead Heath show sheep in the 1940s grazing just above the Men’s Pond. They were for eating, to help feed us during the last war. That would not be approved of now by Hampstead veggie types. They will be for being gazed at, while they graze.

I finish at the Lido , now a listed building, opened in 1938. It has an excellent little café with homemade food.

So there are four different places to swim on the Heath - the Men’s, Ladies’ and Mixed Pond, along with the Lido. No wonder we are so terribly clean. And sometimes a bit wild.

Hunter Davies’s A Year on Hampstead Heath is out now

Too much drinking at the Bar - Graham Boal QC