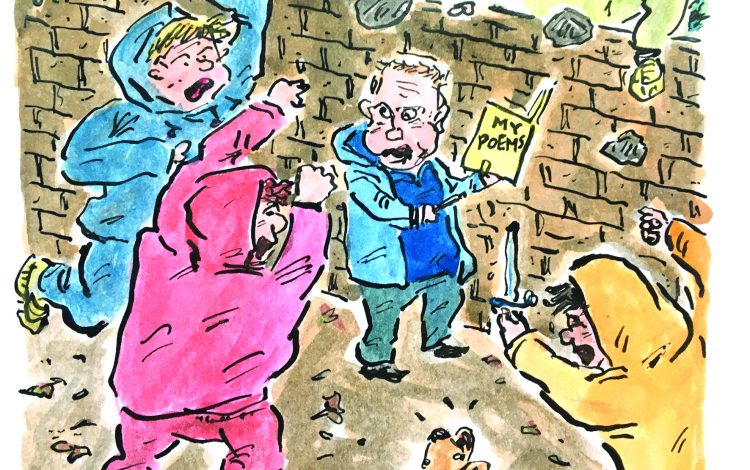 Local tweenagers attacked me as I rewrote Under Milk Wood. By Jem Clarke

My mother’s cultural tastes are defined by her mantra – ‘I like only documentaries and nice things.’

So I did not expect much interest when I explained I had not dusted my bedroom for a fortnight.

I was feverishly gripped by the muse. I was working on an Under Milk Wood-style play for radio, comprising only real-life dialogue I had captured during my perambulations round the boisterous streets of our Victorian seaside town.

I said in the squeaky voice of an urchin, ‘Throw the apple core at the dwarf’s head!’ I then admitted, ‘That’s all I’ve got so far – I had to run back home after that.’

‘Still having trouble with those boys from Number 7? Why don’t you try not to pass their house?’ Mother said. ‘You lack imagination.’

‘Mother, we live at the bottom of a cul-de-sac. I don’t lack imagination. I lack an ability to scale a seven-foot fence. Besides, I’m not a coward.’

It was true. I make a point of answering them with a Paddington Bear hardest stare.

Sometimes I don’t go directly home, but instead disappear purposefully down a neighbour’s drive. Then any observant hoodlum will target the wrong house, should they go for some sort of prank attack.

Recently, the nice young couple across the way went on holiday. I walked up their long garden path to their front door – I even got my own keys out and mimed entry – hoping one of the kids would target the wrong house.

Imagine my surprise and guilt when, the next morning, someone had painted sinister bright-green chalk arrows all along the road directly to the young couple’s house, and even up their garden path to the door.

This was some Putin-sized boldness on the part of the tweenage terrors. I was all very NATO about it. Rather than retaliate like-for-like, I scrubbed every trace of all those green arrows (one hour; five of my mother’s finest Wilko sponges) out of existence.

I gathered more lines for my ‘poem play’ from my travels (‘No winners on that ticket, Mrs Pundleberry – do you want one for Wed-nes-day?’ and ‘Can you move out of the way of the milk? For a tiny fella, you’ve got a lot of horizontal, lad’).

I opened the door to find Mrs Allison, a well-spoken paramedic who used to keep going off on the sick, in my kitchen.

‘Oh my goodness – Mum and Dad are all right, aren’t they?’ I said, in an overly practised tone of utter concern.

‘Oh yes,’ she reassured me. ‘Just I’m the chair of the Neighbourhood Watch.’

‘Of course.’ I sighed an actorly breath of relief. ‘And you’ve come round about the kids at Number 7?’

‘No, I’ve come round about you,’ she said. ‘The couple across the way have emailed me from Tenerife, to say you’ve got a strange vendetta against them.

‘Their doorbell camera shows you lurking at their front door on multiple occasions,’ Mrs Allison continued.

‘Later you scrubbed out all the chalk marks their internet-provider drew on their path – to show where to dig a trench for their new broadband cable.’

Getting Dressed: The eternal Cosmo girl​