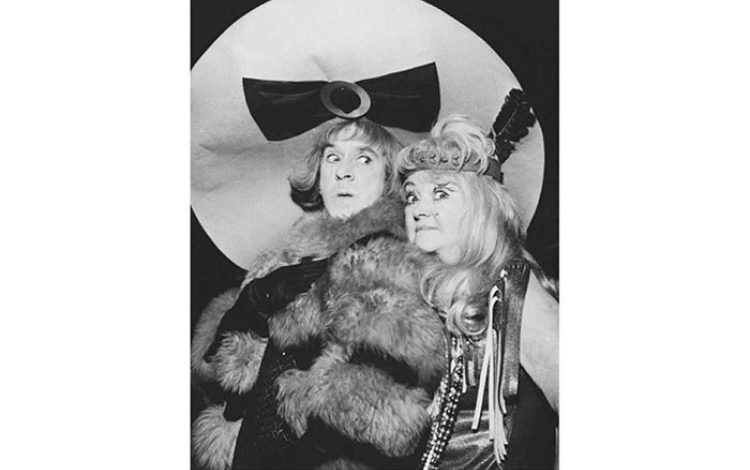 It’s the pantomime season once more. Oh no, it isn’t! Oh yes, it is!

Pantomimes, growing out of commedia dell’arte, have been around in Britain since the 18th century.

The pantomime dame, always played by a man in outrageous costumes, first appeared in around 1806 in the show Harlequin and Mother Goose, also known as The Golden Egg.

Jack Tripp (1922-2005), an English comic actor, singer and dancer, performed as a pantomime dame in more than 35 shows. Described in The Stage newspaper as ‘the John Gielgud of pantomime dames’, he was born 100 years ago, on 4th February 1922, in Plymouth, Devon, the son of a baker.

A natural dancer, he was soon billed as ‘Plymouth’s Fred Astaire’.

He went on to become half of a popular double act with his on- and off-stage partner, Australia-born singer Allen Christie. A celebrated sketch saw Jack as Rosy Bottom, a refined, sex-starved pianist.

During war service with the Royal Electrical and Mechanical Engineers, Jack honed his skills with the Stars in Battledress show in Europe and the Middle East. After the war, he made his West End debut in 1946 and stole the show in pantomimes until his retirement in 2000.

After his death in 2005, his name lived on, gracing the front of the number 713 bus in Brighton. You all know what pedestrians were told when they were nearly knocked over by the bus – ‘It’s behind you!’

The songs remain the same