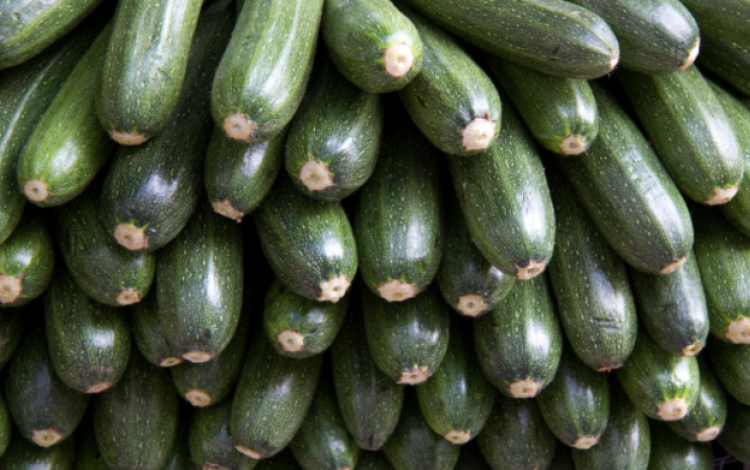 'Once planted out, regular watering is advisable and, when the baby marrows start to form, they should be picked, or at least checked, every couple of days. Go away for a week and, when you return, one or two of the vegetables may no longer be recognisable as courgettes.'

When I was young and given watery, tasteless marrow to eat (better if stuffed with minced beef or lamb), I doubt if anyone knew the vegetable could be picked in its immature state, when it was the length of a finger rather than a forearm and much more palatable. Courgette and zucchini didn’t enter the kitchen garden dictionary until the late 1950s.

I find that courgettes are easiest to grow if started in individual pots, sowing one seed, not flat but upright, in each pot. This year, I am growing a yellow variety (‘Atena Polka’) and a dark green (‘Midnight’). Once planted out, regular watering is advisable and, when the baby marrows start to form, they should be picked, or at least checked, every couple of days. Go away for a week and, when you return, one or two of the vegetables may no longer be recognisable as courgettes.

There are various summer squashes, of the same cucurbita family as courgettes, which are curiously shaped, such as pattypans, which I have not tried to grow. The so-called spaghetti squash, which has stringy flesh, should not be confused with ‘courgette spaghetti’, made with an ingenious modern gadget known as a spiraliser which converts the vegetable into spaghetti-like strips.

This is something perhaps to be tried this summer, when I may also gather a few courgette flowers to fry in batter, stuffed with cheese or rice. But we seldom manage to cut our courgettes until the flower heads have withered or fallen off. I prefer then to slice and stuff the vegetable with a tapenade, as recommended in Jonathan Meades’s delightful new book, The Plagiarist in the Kitchen.

Courgettes don’t last once harvested but, if grown to marrow size, they can be kept in a shed for a few weeks, ideally hung up in string bags. The French have a phrase for the marrow (courge à moelle), but I have never seen it in a market or on a menu. We do not want to lose the English marrow, if only for horticultural exhibitions and harvest festivals.

'In my next life, I'm coming back as Andrew Edmunds' says James Pembroke in his restaurant review