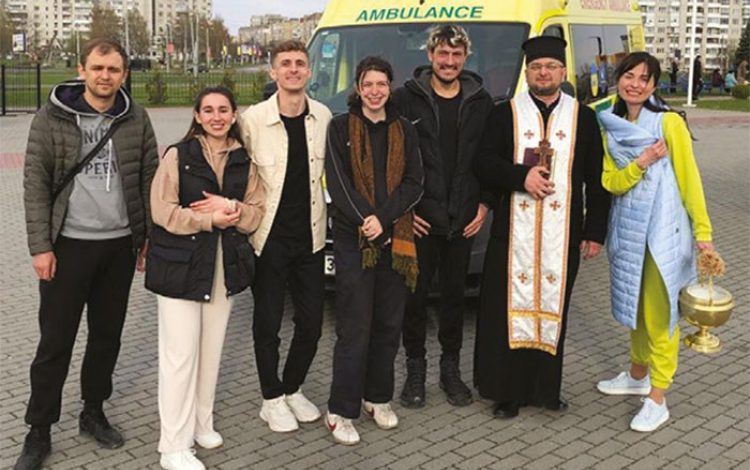 Ada Wordsworth, 23, was studying Russian when the conflict introduced her to the joys of Ukrainian

Two weeks after Russian tanks drove into Kiev, I arrived in Przemyśl, a picturesque town on the Poland-Ukraine border, to work as a translator.

Until that point, I spoke no Ukrainian – but I did speak Russian, which I studied as an undergraduate. The first volunteer I met – a kilt-wearing Scot with no knowledge of either language – questioned my coming.

‘The refugees are fleeing Russia,’ he said. ‘Why would they want to speak Russian?’

In fact, the ability to communicate, regardless of whether it is in Russian or in Ukrainian, is the most vital skill you can have in this situation. Still, I had myself been worried about the question.

Ukrainian is the only national language of Ukraine. All official documents must be written in Ukrainian. Since 2017, Ukrainian has been the language of instruction in all Ukrainian schools.

Despite this, you would be hard-pressed to find anyone in the country who does not speak Russian. Ukraine’s greatest living writer, Andrei Kurkov, writes entirely in Russian. President Volodymyr Zelensky’s first language is Russian. Even in Lviv, the de facto capital of the west of the country, people will understand Russian – though generally they would prefer to respond in Ukrainian.

I’ve seen people try to compare Ukrainian to Scots, or Welsh. This is a mostly false comparison. Ukraine is the active language spoken by Ukrainians every day. Whether they spend part of their day speaking in Russian, and part in Ukrainian, is a personal choice.

While British Celts may want Scots and Welsh to have a meaningful place in their respective nations, this fight has already been fought and won by the people of Ukraine.

Putin claims that this war is in order to liberate Russian-speakers in Ukraine. It is an argument he has used before – the annexation of Crimea and initial invasion of the Donbas were under the same pretence. The ultimate irony is that the Russian-speaking parts of the country are where the worst massacres are taking place – almost 82 per cent of Mariupol residents speak Russian as their preferred language.

Arriving at Przemyśl station, armed with my knowledge of Russian, I was immediately confronted with Surzhyk – the Ukrainian-Russian mix spoken in the east of the country. Sentences entirely in Russian are sprinkled with Ukrainian words, and vice versa.

You quickly pick it up. After seven weeks on the border, my Russian took on a distinctive Surzhyk flavour.

After years spent painfully attempting to perfect my Russian grammar to a Moscow standard, I now speak a language that is unrecognisable. Ukrainian words pop up every few sentences, my pronunciation has changed, and there’s something hugely empowering about it.

The Ukrainian language is softer, and arguably more beautiful – it’s better suited to poetry and folk song. The Russian and Russian-Ukrainian dialects spoken in Ukraine have fewer hard consonants, and a more singsong flow.

The Russian ы (a guttural sound, as though from someone being punched in the stomach) is replaced in Ukraine with an и, more equivalent to an English ‘ee’. And Г, a hard ‘g’ sound in Russian (as in ‘goat’), is softened in its pronunciation in Ukraine to a ‘kh’ (like the ‘ch’ in ‘loch’).

There is something in this softening that matches the Ukrainian national character. In Moscow, I learnt that to smile at someone you do not know will be taken as a sign of either flirtation or insanity. On the Poland-Ukraine border, I learned how to speak Russian with a warm smile.

The Ukrainianisation of Putin’s mother tongue would drive him insane. This is not the language of Pushkin and the Petersburg text – it is the language of a young Gogol, fresh from Poltava. Gogol, a Ukrainian, wrote Evenings on a Farm Near Dikanka in Surzhyk, even if he is still remembered by most in the West as a Russian.

Members of the Kremlin would have us believe that Ukraine is nothing but a ‘little Russia’. Their representation of Ukrainians is of people similar enough to them – other than in their backward, rural ignorance. They would maintain that this melodic and lyrical language is a sign of something lacking in the Ukrainian psyche.

The world now knows how wrong this assumption is. That it has taken the massacre of tens of thousands of Ukrainian civilians for the world to recognise this – to see that Ukrainian culture is just as rich as any other and is by no means a diminutive of Russia’s – is a tragedy.

For my part, I am leaving Russian studies as a field. I will spend the next year continuing to volunteer between Poland and Ukraine with my organisation, the Kharkiv and Przemyśl Project, helping to provide humanitarian aid to those who need it most.

After that, I will return to academia, with the hope of pushing forward the promotion of Ukrainian culture, in a Slavonic-studies field that has been, until now, far too focused on Russia.

Too much drinking at the Bar - Graham Boal QC

How to buy a picture - Huon Mallalieu