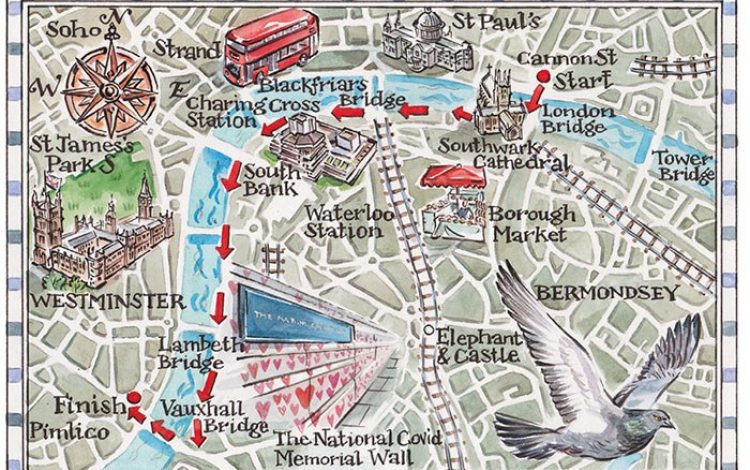 Patrick Barkham enjoys a stroll alongside Old Father Thames, a natural wonder of our world

‘There are two things scarce matched in the universe – the sun in heaven and the Thames on earth.’ So declaimed Walter Raleigh, according to lettering on the stone embankment close to Southwark Cathedral.

Had Raleigh really sailed around the world when he made those remarks? Or was London’s murky, grey-brown water blue and leaping with salmon in Raleigh’s day?

I squinted to imagine a different time as I took a walk along the south bank of England’s longest and best-known river, but gave up. The present was so different – though as compelling as any ancient vision too.

London is a place mostly without weather but the Thames conjures it up – a breath of fresh air with a briny tang that whips through the biggest city in Europe.

Close to the Raleigh inscription, the air was rich with the scent of charred meat and spices from the stalls of Borough Market. Here, the rivulets of people streaming along the Thames-side path were lunch-bound City workers in Christmas jumpers. Some sat down to eat in little solar domes – plastic dining pods added to walkways. These COVID cubicles appeared to be the most brilliant invention for spreading the virus.

Across the river, the dome of St Paul’s matched the colour of both clouds and river. The tide was so low that a wade across to the north bank didn’t look implausible and the riverside beaches were huge. One beach, a mixture of cement, tiles, shingle and grey London clay, was bustling with mudlarking dogs and toddlers. It felt homely and slightly subversive – an intimate, temporary fissure in the city, beyond the reach of commerce.

The flow of people changed beside Vinopolis and the Premier Inn. Office types were replaced by tourists served by global chains and global buskers. I suppose I was a tripper too, not having lived in London for more than a decade, although I had no desire to eat in Pret or Pizza Express or to take a selfie in front of pavement musicians belting out Jailhouse Rock and My Way. Is it too much to ask for site-specific pieces? Surely we could have Waterloo Sunset.

The grey, concrete sweep of Waterloo Bridge matched the river’s grace, sweeping its red buses high overhead. The South Bank was zhuzhed up with a profusion of new stalls but the brutalism of the National Film Theatre and the National Theatre looked quite modest now beside the new glass towers that bulged like contemporary cars. The roll and clatter of the skateboards echoing in the concrete, graffiti-clad caverns sounded like an incompetent delivery guy constantly dropping a large box.

At the precise moment I passed the Gothic extravagance of the Houses of Parliament, Boris Johnson was fielding Prime Minister’s Questions about Christmas cheese-and-wine sessions. At least the underpass below Westminster Bridge had been laced with disinfectant.

Between St Thomas’ Hospital and the river, I stumbled on a wall of hearts – the National Covid Memorial Wall. The plain stone wall was decorated with thousands of pink and red, painted hearts, which contained sorrowful and heartfelt tributes – some plain; others poetic; all moving. ‘My much-loved mother’. ‘Nano 1936’. ‘Robert “Bob” Justice’.

There were a few ‘Ashley+Jodie 4 Eva’ scrawls. But a committee of volunteers, the Friends of the Wall, have scrubbed off graffiti and repainted words and hearts when they have faded.

What a beautiful addition to the spectacle of the Thames – as organic and democratic as the river itself.

As I reached Vauxhall Bridge, the sun came out, and I took my leave of the water as the tide bore plane leaves upstream.

On the internet that night, I learned that Walter Raleigh’s words were fiction, created by Sir Walter Scott in his novel Kenilworth.

The Thames may not be a wonder of the universe but it is a wonder of our world, a gift of life that keeps on giving to the millions who walk beside it.

I walked from Bank tube station across London Bridge, picking up the Thames path by Southwark Cathedral and walking westwards, to finish at Vauxhall Bridge