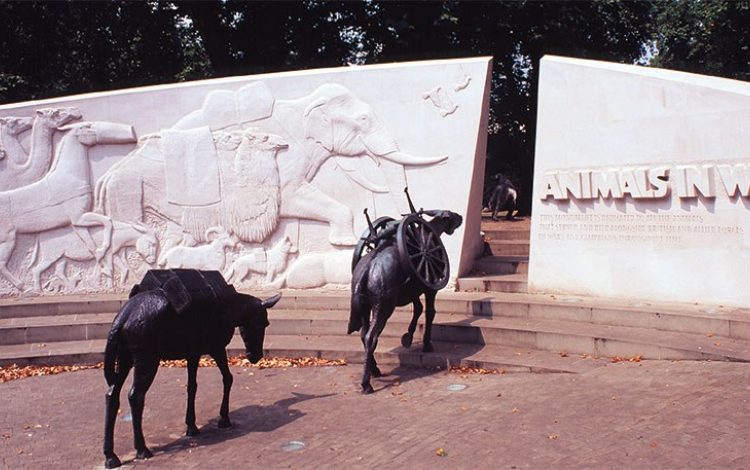 Every time I drive past the Animals in War Memorial in Park Lane, I’m pierced by the poignancy, laments Lucinda Lambton

The heart-stirring sight of the Animals in War Memorial, in London’s Park Lane, is to be seen daily by many thousands of people driving by.

It is, though, very difficult to inspect its highly rewarding excellence and charm at close quarters. Situated between two roaring traffic-filled freeways on what was originally the elegant edge of Hyde Park, it is tricky to reach.

Reach the memorial, however, and you are home and dry. You’re quite magically immersed in a poignant peacefulness, charm and beauty that overpower all else, with a power that renders the world about you quite silent; this despite the multitude of roaring motors on either side.

The memorial is as moving as it is momentous. Gently traditional yet slicing-edge modern, it moves you to the very roots of your boots. It was Jilly Cooper, with her book Animals in War, who inspired its creation, along with her husband, the late lamented, delightful and distinguished military historian Leo Cooper. He suggested the all-important words carved into the stone: ‘THEY HAD NO CHOICE’.

The sculptor David Backhouse was the genius behind its design. He sculpted the four bronze animals as well. Richard Holliday and Harry Day sculpted the stone animals. All the names of those who paid for it are incised into the back of the wall. It was commissioned by the Imperial War Museum. The 58-foot-long, curved sweep of a stone wall was designed as the arena of war. It seems to enclose you with all the warrior creatures – carved in bas-relief – that are thundering by.

Carrier pigeons fly overhead; two million were used in the Second World War. While 17,000 were parachuted into enemy territory, only one in eight returned. An elephant – considered a ‘skilled sapper’ in Burma – leads the charge on the ground. There are horses – eight million of them perished during the First World War – dromedaries and camels, as well as a chicken, a dolphin, a donkey, a cat and a goat. A mule at the gallop, with his head thrown back, is enjoying the last of his food in a heavy, leather nosebag. Most endearingly, there are tiny glow-worms to be seen. The little creatures provided light for the ‘boys’ to read their letters and maps in the trenches.

The wall is engraved with the ennobling words: THIS MONUMENT IS DEDICATED TO ALL THE ANIMALS THAT SERVED AND DIED ALONGSIDE BRITISH AND ALLIED FORCES IN TIME. Bronze mules, life-size and heavily laden, somewhat gloomily toil forth to an opening in the wall, through which you too can walk. This enables you to look back at the empty silhouettes of the animals carved on the other side, all of them wraith-like, representing ghosts of these victims of war.

On their own and leading away from the memorial are two bronze animals walking forth to further conflicts in the future: a ten-foot-high stallion lifts his front leg to go on his way. A dog looks wistfully back over its shoulder at the field of battle behind them.

Never, ever have I gone past that dog – and I do so very often – without being pierced by the poignancy of its attitude.

Never indeed can I see this whole memorial without giving a wail of sad delight. Some of the most exhilarating hours in my life as an architectural photographer were spent recording this monument, every second of them intoxicating. The sun was out, Park Lane’s traffic was roaring past, people poured hither and thither, and in the midst of the mayhem was this great modern masterpiece, looked at and loved by all.

The stories of animals immersed in wars are weakeningly touching stories. Take Simon, the cat who played a vital role on HMS Amethyst during the Yangtse Incident in China in 1949. He had been smuggled aboard the British ship by Ordinary Seaman George Higginbottom – what a pleasure that his name has been preserved.

Civil war had broken out, and the opposing forces of Chiang Kai-shek’s Nationalists and Mao Tse-tung’s Communists were encamped either side of the river. Despite flying the White Ensign and having Union flags hung over the side of the ship, the Amethyst was attacked at point-blank range. The cat had his eyebrows and whiskers burnt off and his body gashed through by shrapnel.

The Chinese demanded that the British admit to firing first. They would not – and so stalemate set in, with the Amethyst stranded in a rat-infested hell. Forced out by the explosions, the rodents had become rampant, eating the fast-depleting stores, as well as, literally, the crew’s toes. Simon’s average rodent cull was at least one a day. When he killed a particularly large and vicious rat – nicknamed Mao Tse-tung by the crew – he was hailed as a hero and promoted to Able Seacat Simon.

The thieving from the ship’s stores was stayed, the spirits of the bored seamen lifted and the sick seamen soothed – all by Simon the cat. Eventually the Amethyst escaped, in the dark, under fire. It was ‘a daring exploit’, telegraphed George VI; ‘The courage, skill and determination shown by all on board have my highest commendation. Splice the mainbrace.’

A special presentation was made on deck to all those who had survived the Yangste Incident and, as the officers and men stood to attention, Simon, held by a boy seaman, was read the citation, to ‘Able Seaman Simon, for distinguished and meritorious service … you did rid HMS Amethyst of pestilence and vermin, with unrelenting faithfulness’. The cat was also presented with the Amethyst campaign ribbon.

Simon was recommended for the Dickin Medal, awarded to animals for acts of bravery. So famous did Simon become throughout the world that a ‘cat officer’ had to be employed to look after his mail.

The Amethyst returned to Portsmouth to a tumultuous welcome. But, as all Simon’s old pals marched away, he was borne off to the quarantine quarters.Time magazine and his photograph was on the cover of Picture Post.

He was posthumously awarded the Blue Cross Medal of the Dumb Friends League, as well as the Dickin Medal. The cat’s burial was at the PDSA’s cemetery in Ilford and attended by hundreds, including all the survivors from HMS Amethyst. The service was conducted by Father Henry Ross of nearby St Augustine’s Church.

Simon’s little body was wrapped in cotton wool and his coffin draped with the Union flag. He was given full naval honours.

The inscription on the gravestone reads ‘Throughout the Yangste incident his behaviour was of the highest order’.