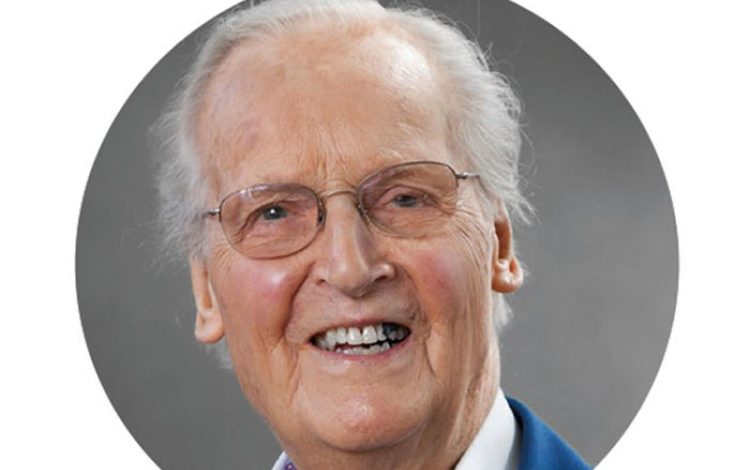 The life of Nicholas Parsons CBE (1923-2020) was celebrated for more than just a minute. By James Hughes-Onslow

A cat crept up the aisle in the middle of Nicholas Parsons’s memorial service at St Paul’s, Covent Garden.

It appeared just as the actress Sheila Hancock was reading from The Owl and the Pussy Cat by Edward Lear.

‘Oh Pussy, my love, what a beautiful pussy you are,’ read Dame Sheila.

Parsons, host of the radio show Just a Minute for nearly 52 years, was a lifelong fan of Lear. He celebrated his work on TV and in a touring one-man show.

Esther Rantzen, paying tribute to Parsons’s tireless work for charities, asked where the owl and the piggy-wig were.

Gyles Brandreth said he first met Nicholas in 1969 at a Christmas party for Fanny Cradock – ‘that unique cross between Mary Berry and Jeremy Clarkson’.

‘Everyone who was anyone was at the party,’ said Brandreth. ‘Lionel Blair was there. It gave rise to the joke of the evening, seeing Fanny and Lionel together. “Look, it’s Butch Casserole and the One Dance Kid.” At 11pm, Nicholas performed this brilliant impromptu cabaret, a routine in which he satirised European cinema, acting in cod French, German and Italian.’

Brandreth recalled Parsons’s time in the Windmill Theatre, Soho, and his spell as straight man to Arthur Haynes and Benny Hill.

Paul Merton remembered his first appearance on Just A Minute in 1988. ‘Nicholas was very encouraging,’ said Merton. ‘He was the only one who was, in those very early days, and I later learned it was his firm belief that the programme needed to attract new blood to survive… Nicholas was always kind, generous and supportive to new players of the game.’

Hymns included Praise, My Soul, the King of Heaven, and William Blake’s Jerusalem. The vicar called for a standing ovation for Parsons, followed by the Just a Minute theme, Chopin’s Minute Waltz.

What are cremation tattoos?

Rachel Johnson’s Golden Oldies: Walk on the vile side

Country Mouse: ​I wish I lived in Dorset, king of all the counties​, says Giles Wood from Gogglebox