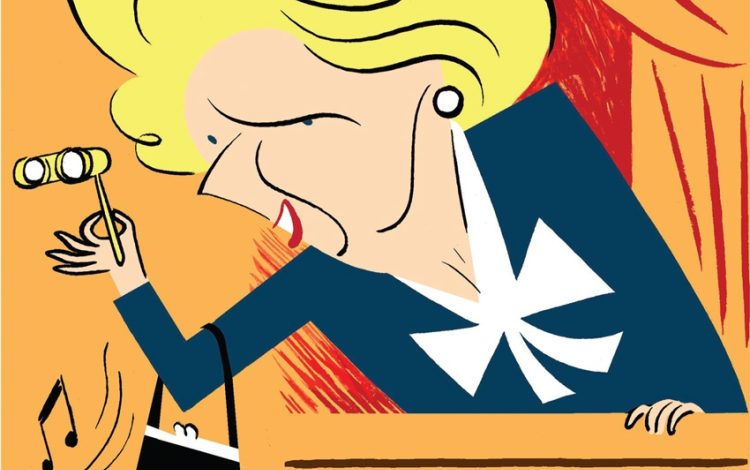 Margaret Thatcher won her third election today in 1987. She was regarded as a philistine but this is wide of the mark, says Miriam Gross. In fact she loved poetry and was fanatical about opera

When I tell people that one of Margaret Thatcher’s favourite composers was Bela Bartok, they are dumbfounded. Wasn’t she, whatever else you might think about her, one of history’s undisputed philistines?

No, as it turns out, she wasn’t. When, in 1988, Bartok’s remains were being transported for reburial from the US to his native Hungary, Mrs Thatcher took time out to travel to Southampton, where the ship had docked, to attend a memorial concert. And here she is, speaking at a ‘Britain Salutes Hungary’ reception in 1989: ‘... then of course I have always been wherever Sir George Solti has been doing Bartok ... isn’t it fantastic? I did not really fully appreciate the marvels of that particular music, but Sir George Solti was a pupil of Bartok and together they do absolute wonders’.

Mrs Thatcher, it appears, had a genuine love for music, and was impressively knowledgeable about it. I learned of her attachment to Bartok, along with many other astonishing facts about her cultural activities, while doing research for Volume II of Charles Moore’s superb biography, Everything She Wants. Some of my findings appear in his book, but there were many interesting details for which he didn’t have space.

For example, continuing for the moment with her musical life, Isaiah Berlin recalls that when he met Mrs Thatcher at the Royal Opera house during a performance of Prince Igor by Borodin, she informed him that while at Oxford (where she had sung in the Bach choir) she had taken part in the university’s production of the opera.

Her choices for Desert Island Discs included Beethoven, Dvorak, Verdi, Mendelssohn, Mascagni and ‘Smoke Gets in Your Eyes’. ‘Music’, she told Roy Plomley, ‘is what I go to when I want to take refuge ... from the very logical life I’ve lived, and always been trained to live.’ The highlight of her year, according to her long-term adviser and friend Charles Powell, was the Salzburg Music Festival; and she went to Glyndebourne at least once a year.

Various musical people I talked to – Claus Moser, Jeremy Isaacs, Robert Armstrong – who had accompanied her to opera productions said that she knew the works inside out, sometimes better than they did. James Lees-Milne recounts in his Diaries that when John Julius Norwich took her to Tosca, ‘She knew everything about past performances, when and where and who sang them. When the performance was over, he asked her whether she had not thought it a splendid one. “Yes”, she replied, “but the fichu should not have been scarlet but cerise”.’ (A fichu, Google informs me, is a small, triangular shawl.)

No doubt she was a swot and a bit of a show-off, and, yes, she enjoyed the musicals of Andrew Lloyd Webber. But was she, as Mary (Baroness) Warnock – Mistress of Girton College Cambridge at the time – put it, ‘just a Muzak person who liked stuff that was pumped out and absolutely tasteless’? Warnock was being interviewed by the journalist Graham Turner, who kindly lent me the transcript of his interviews. His article – ‘Why Britain’s Eggheads look down on Mrs Thatcher’ – appeared in the Sunday Telegraph in 1988. Most of the eggheads he talked to agreed that Mrs Thatcher lacked any glimmerings of artistic sensibility.

Anthony Burgess (who lived in Monaco) went so far as to claim that ‘She is never to be seen at concerts, plays or operas’. The author Robert McCrum, writing in the Guardian the day after she died, judged that ‘Margaret Thatcher was the most philistine PM in decades’.

These detractors presumably didn’t realise that Mrs Thatcher was a fan of
T S Eliot and Philip Larkin. Or that she was a lifelong reader of poetry, her favourite poets, according to Charles Powell, being Kipling, Walt Whitman and Longfellow, the last of whom she quoted in various speeches in the US. Or that she knew a great deal of poetry by heart, much of it – Wordsworth, Tennyson, the words of numerous English hymns – learned as a girl at her grammar school.

Researching into her reading habits brings out just as many surprises as her musical life. When she was leader of the opposition, a Methodist minister and friend of her father asked her to name her eight ‘desert island’ books for an article in his church magazine. She chose: a collection of sermons by John Wesley; Churchill’s History of the English Speaking Peoples; Elizabeth Longford’s biography of Wellington; Robert Blake’s Disraeli, Pepys’s Diary; Kenneth Clark’s Civilization; a dictionary of quotations; and The Albatross Book of Living Verse, a volume compiled by the Marxist American poet and critic Louis Untermeyer.

She had also been much influenced by Arthur Koestler’s anti-Communist novel Darkness at Noon; and she referred in several speeches to the impact on her thinking of A Time for Greatness by the American historian Herbert Agar.

At the same time, as she herself made clear, she ‘lapped up’ detective stories of any sort ‘to read late at night’. And she was, as Nigel Lawson wrote, ‘an avid reader of the works of Frederick Forsyth’. So, as in the case of music, her tastes were not always entirely highbrow.

But she was a passionate self-
improver. The philosopher Bryan Magee recounts that, in the Seventies, when he was a Labour MP and she not yet leader of the opposition, they had been introduced while queuing in the Members’ Dining Room. ‘Not the Bryan Magee’, she had enthused, ‘the author of Karl Popper! I liked the book so much I read it twice.’ They subsequently often sat together enjoying philosophical conversations.

The visual arts, on the other hand, were not Mrs Thatcher’s strong point. Richard (Lord) Luce, who was arts minister at the time, told me that, to counter her ignorance, she would ask various museum directors to take her round ‘incognito’ to point out and explain paintings of interest. She learned a lot, he says, but more about the technical than the aesthetic aspects of painting. Even so, hers was not the behaviour of a confirmed philistine.

Another surprise: even though she didn’t care for tax payer funding of the arts (and she did much to encourage private sponsorship), government spending in total actually went up, not down, during her time in office. But some in the arts world did better than others. Theatre people in particular felt hard done by and it’s true that contemporary theatre was not Mrs Thatcher’s favourite art form. She only once attended a performance at the National Theatre, Peter Shaffer’s Amadeus, and was scandalised and incredulous at the depiction of Mozart as a foul-mouthed buffoon.

Peter Hall, director of the National Theatre during her premiership, has this to say in his memoirs: ‘I saw the Thatcher government dismantle the performing arts, spoil our education system and partially destroy our great tradition of public service broadcasting.’

Mrs Thatcher’s bourgeois gentility seems to have driven Left-leaning arts people completely over the top. But, for all their contempt, there is more than enough evidence to show that she was certainly no philistine.

A touch of class in the garden