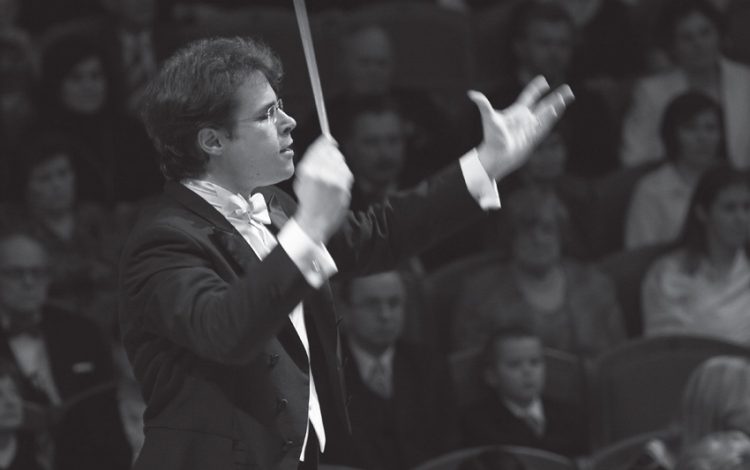 ‘Did you see the concert at the Festival Hall last night?’ I was asked by a radio producer. ‘Well, I heard it, if that’s what you mean.’

This is Pedants’ Revolt stuff. But the eye’s hegemony does enough damage to the appreciation of good music without loose talk about seeing concerts.

Take the problem of filmed concerts. Given a first-rate shooting script drawn up by a director who literally knows the score, the filmed concert can be educative. Sadly such directors are rare and quality filming is expensive. Unless you are Austrian Television earning megabucks from the Vienna Philharmonic’s New Year’s Day concert, the BBC in Proms mode or Herbert von Karajan, such things are generally unaffordable.

The other day I was sent a EuroArts DVD of an all-Beethoven concert from last year’s Easter Festival in Baden-Baden, the south-west German spa town to which the money-mad Berlin Philharmonic decamped in 2013 after abandoning its former Easter Festival home in Salzburg. I watched with growing dismay as a randomly filmed performance of the Pastoral Symphony unfolded in the hands of what appeared to be a half-attentive orchestra performing in the presence of an elderly gentleman who seemed to be doing very little.

Still, I had been here before, which is why I reinserted the DVD, disabled the screen, and simply listened. And it was wonderful. Here was cultured playing allied to an ease of utterance without which this most profound of pastoral meditations cannot hope to work.            The performance of Beethoven’s Violin Concerto was even better, though to be fair, it hadn’t been too bad on film. Where concertos are concerned, the ear and the eye can generally come to some kind of accommodation.

The soloist was the spare-toned yet unfailingly eloquent Isabelle Faust, a superb violinist who is better known in Germany than she is here. Her playing of Beethoven’s slow movement – one of the violin repertory’s severest tests – was masterly, as was the endlessly patient accompaniment provided by the Berlin Philharmonic under the guidance of that aforementioned elderly gentleman, the 87-year-old Bernard Haitink.

Yehudi Menuhin loved the Berliners. ‘They approach a note with anticipation and leave it with regret. What a privilege it is to play a slow movement with such musicians!’ He was thinking of Furtwängler’s orchestra and, after him, Karajan’s. But it’s reassuring to know that such skills have not been lost.

Both conductors cherished live music-making, though Karajan, unlike Furtwängler, revered the gramophone and the blessings private listening confers. In notes for an unpublished book, he spoke of ‘the peace of my room where I am free of all disturbance, alone or with some like-minded friend, in the presence of the music’. Nor was he deterred by the record’s unchanging nature. ‘Once a record is one’s own, one aspires musically and spiritually to appropriate it by frequent listening.’

For all this, there is one composer whose symphonies I do go to see: Gustav Mahler, whose epic Third Symphony was recently heard (and seen) in London’s Royal Festival Hall. Mahler was 36 when he completed the work in Upper Austria in the summer of 1896. When the young Bruno Walter visited and expressed wonder at the magnificent woodland and mountain scenery, Mahler announced, ‘There is no need to look at that – I’ve already composed it.’ Which is more or less what happens in the Third Symphony, where Nature is summoned out of a state of non-existence by the god Pan in three glorious and gloriously contrasted opening movements; where mankind, stricken and grieving, walks the earth; and where carolling angels pave the way for an orchestral finale which offers redemption in D major.

Marshalling forces which included 34 ladies from Philharmonia Voices, 34 smartly blazered boys from Tiffin School, mezzo-soprano Bernarda Fink and a much augmented Philharmonia Orchestra, whose numbers included eight percussionists, four tubular bells, two harps and a ravishingly played offstage posthorn, was the 34-year-old Czech conductor Jakub Hrusa. Perhaps you need a touch of megalomania to direct such a work and Mr Hrusa didn’t disappoint, strutting around the rostrum like a musical Michael McIntyre and even essaying the occasional Bernstein-like jump.

I seem to remember Bernstein jumping even higher during a performance of Mahler’s Seventh in London in the 1960s, just as I remember him fattening up the New York Philharmonic sound by stroking his embonpoint during the nobilmente of Elgar’s Cockaigne Overture and directing the Hoe-Down from Copland’s Rodeo from the hip like a gunslinger in ###i