My Bonnie and Clyde parents 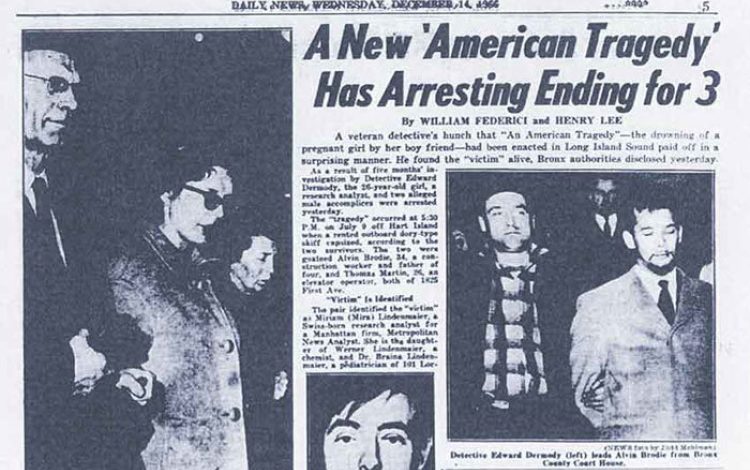 Adopted as a baby, Donna Freed tracked down her birth parents – and found a tale of fraud, New York cops and runaway lovers

I grip the phone, willing the Broward County Sheriff’s Department to locate my mother.

Eddie Mair has just announced on BBC radio’s PM that six people died when the Hollywood Hills Rehabilitation Center, a nursing home in Hollywood, Florida, lost power during Hurricane Irma in 2017. It’s the home of my birth mother.

My siblings and I (not related) were adopted as babies in the 1960s, through Louise Wise Services, a now discredited and shuttered Jewish adoption agency in New York City.

My mother always claimed that our adoption wasn’t a secret, despite its being mentioned all of three times before I reached my twenties: my sister told me we were adopted when I was six, my brother confirmed it when I was 14 and my mother finally acknowledged it when I asked outright at 18.

In Why Be Happy When You Could Be Normal?, Jeannette Winterson, whose fierce identity was forged in the crucible of her childhood, discovered that her adoptive mother, despite the violence and madness, was an impossible act to follow.

In my adoptive mother, I had a similar, if less extreme example: we were locked not in the coal bin, like Winterson, but in the basement!

However, my adoptive mother, after a stormy start, matured into a loving and devoted parent. My desire to look for my birth parents didn’t develop until her death left me feeling bereft and unmoored, my life unwitnessed without her. And while the search no longer felt disloyal, I was wary of uncovering a prosaic story.

When, some months after my mother’s death, my son asked if I had a picture of the ‘other’ mother who ‘couldn’t take care of me’ I took the plunge.

I contacted Spence-Chapin, the adoption agency appointed as custodians of Louise Wise Services’ records after its closure in 2000. Tim Wardle’s 2018 documentary, Three Identical Strangers, exposes one reason the agency was closed: a secret study on nature vs nurture that separated twins and triplets at birth.

My appointed social worker takes a few months to prepare a sketchy, ‘non-identifying’ but rather revealing portrait. My birth mother was born in Switzerland in 1939. At the time of my birth, ‘she was a 27-year-old, Caucasian, Jewish, single female’, who emigrated to the USA with her family in 1941. Her mother was a Latvian-born, Swiss-educated paediatrician and her father a PhD chemist from Basel, who went to America for work reasons (not because of the Nazis). About her older sister, the social worker tells me, ‘She, too, had a child for whom she had planned for adoption.’ She lists my mother’s physical attributes and characteristics along with the random detail that my mother was ‘a strong and expert swimmer’.

As I read on, my heart floods with warmth as an unacknowledged fear dissolves: ‘Your birth mother said that she was thrilled to have conceived you.’

The description of my father is intriguing: ‘40-year-old, Caucasian, Catholic, married man with four children who worked variously as a bartender, jazz musician (flute and tenor saxophone) and construction worker.’

‘Your birth mother fell in love with a man 13 years her senior,’ the social worker continues. He asked her to conspire with him in a plan to defraud an insurance company. He told her that they could run away together to Spain for the rest of their lives if his plan succeeded.’

When she asks if I want to be reunited, I immediately say yes. ‘I’m so glad,’ she says. ‘She requested reunion in 1996.’ For a reunion to take place, both parties have to agree to it. As I burst into tears, it dawns on me that I am indeed both Jewish and Catholic: I feel guilty for making her wait.

And then it’s my turn to wait; two months later, I am advised that the agency is still having trouble contacting her.

I turn to the New York Public Library, where every birth in New York is recorded. I eventually find a match to my birth certificate and a surname. The name, together with the grandparents’ dates of birth (from the report), are enough for the Death Registry to reveal their full names and location at death.

The next obvious step is an online search for those names, plus the words ‘daughter’ and ‘insurance fraud’.

And up comes a newspaper clipping from the Aberdeen Daily News: ‘Woman Reported Dead Arrested In Hotel Room’. I see my cheekbones protruding from my mother’s sunglasses, her hand resting on the swell of her six-month-old conception. My father, handsome and collected, in a pristine camel-hair overcoat, with his arms pinned behind him, is led down the steps of the Bronx County Courthouse by two rumpled detectives (pictured). I have his eyes, but the face I am looking at is my son’s.

The full extent of my parents’ folly in the face of my mother’s pregnancy is laid bare in the widespread coverage. The Aberdeen Daily News quotes the AP wires: ‘A 27-year-old woman, reported dead five months ago, has been found alive in what authorities describe as a bizarre plot to defraud two insurance companies of $36,000 by staging her accidental drowning.’

The arresting detective describes his initial suspicion when no corpse turned up in the waters off City Island in the Bronx – which he had fished his whole life and knew to contain no flesh-eating fish. Also distinctly suspicious was her replacing her own father as the beneficiary on her two life-insurance policies with my father just three months before she was reported dead.

‘She was arrested in her hotel room 19 miles north of Times Square,’ the newspaper continues, ‘where she was registered under an assumed name and working as a waitress for 87 cents an hour. Burton B Roberts, chief assistant Bronx district attorney, said official wiretapping, authorised by the Bronx Supreme Court last September, played a key role in solving the case; police listening in on a telephone conversation heard her voice for the first time Thanksgiving Day.’

I ache for this woman, pregnant and alone in a hotel room – in what turned out to be my home town, White Plains, New York – her days spent waiting for the phone to ring, pouring coffee for the cops who would later arrest her. Ultimately, my father was sentenced to three years in prison, while she was released into the custody of her parents.

The Death Registry unveils my father’s date and place of death: July 2004, NY, NY – exactly a year before I moved to London. My mother’s name finally pops up in a Broward County Sheriff’s jobs forum from September 2003, along with two co-workers.

I scroll through the contact details until I find one of the co-workers; my mother’s details do not appear. I leave a message, saying that I am a relative, live in England and would like to be in touch with her. Two days later, an email comes back with a phone number at the Hollywood Hills Rehabilitation Center.

It’s the first night of Hanukkah, in December 2010, and my husband has fallen asleep reading stories to our son. I dial the number. When I ask for her by name, she says, ‘This is she,’ and I revel in the proper grammar.

She laughs and says, ‘That depends.’

We are both sobbing and she cries, ‘Yes, oh, it’s you – it’s a Hanukkah miracle!’

After months of phone calls – calls in which she tells me that my father was her big love; that they were in touch even after he went to prison and back to his family; that I was her only child; that there were two terminations before me – we meet.

The nurse puts a chair at the end of her bed, but it feels too far away so I lie down next to her. Side by side, we lean into each other, our hands reaching out.

‘We have the same thumbs!’ I exclaim – and my son bursts into the room and shouts, ‘Grandma!’