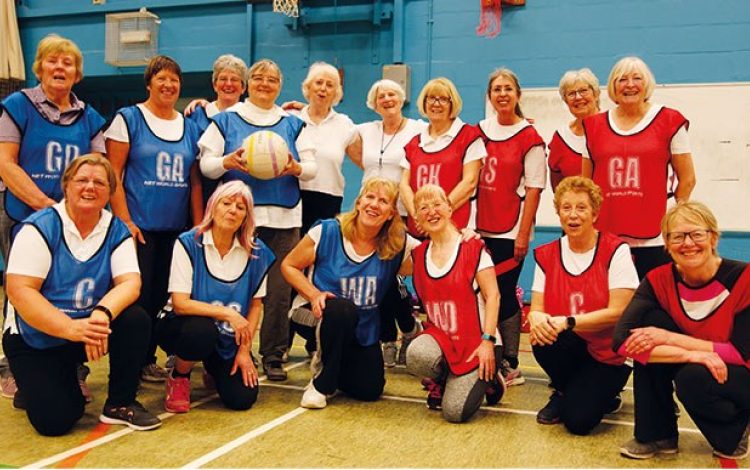 Fifty years after leaving school, Jenny Bardwell fell in love with the game again – even if the net now seems a lot higher

‘We had a new lady last week, but she fell over three times and then went home.’ These were the words that greeted me at my Thursday-afternoon netball on Hayling Island.

Between 1971 and 1976, at Thomas More High School in Purley, I detested gymnastics and felt sick as my turn to vault over the huge, suede horse crept ever closer. I hated straggling and puffing with the other losers during cross-country running and I got hit over the head with a bat in rounders.

I do remember that I quite enjoyed netball. I liked the feel of the heavy ball in my arms, and the joshing with teammates, and I could always rely on Jacqui Perkins to pick me for some fun position such as wing attack.

Before the pandemic, participation in netball was increasing at a faster rate than in any other team sport. A 2019 Sport England survey showed that nearly 320,000 adults were playing every fortnight.

The Back to Netball and Walking Netball movements have inspired organisations such as the WI to encourage hundreds of women to return to a game they probably abandoned in the 1970s. For some, netball is linked to painful memories of being picked last for a school team but if you can banish such demons, you could be in for an exciting time.

My group was set up by Anne Hollis, a volunteer with the University of the Third Age (U3A). Although it’s advertised as ‘walking netball’, I’m afraid we often break into a trot or canter – we just can’t help ourselves! We are breaking the game’s most basic rule, but if the whistle doesn’t blow, we carry on. Some of us even run backwards, quickly, in a desperate attempt to be spotted by the person passing the ball.

We range in age from early 50s to late 70s – and there has been only one admission to A & E in the past four years.

Eva, 77, has arthritis and is recovering from a cataract operation but still loves to play and says it helps to keep her weight down. Table tennis or badminton would be less hazardous – your opponent is a safe distance away. Netball is meant to be a non-contact sport but it’s still in your face, literally, with a lot of jostling, waving of arms and shouting. We are a highly competitive bunch and social distancing is thrown out of the window.

Deanne Cushion, our coach, has been a devotee of the game since joining a junior team in 1956. She stopped playing in her sixties after some serious competing. ‘Dad thought I was crackers even playing when I was 40. When I reached 73, walking netball came along and I simply couldn’t resist.’

‘How are we all today?’ Deanne says, as she begins our warm-up. She asks us to look over our shoulders, ‘but I won’t look over mine because of my dizziness’. She explains that, as an experiment, we will change positions after six minutes of play.

‘Well, I won’t be very good at shooting today, because of my neck,’ protests Mary.

Mary, 64, is 4 foot 11. We all dread having her as an opponent because she is an absolute terrier – a whirlwind, who careers about the court dodging and outwitting us all.

The seven positions are the same, but in walking netball you are not allowed to jump and at least one foot must maintain contact with the ground. If you catch the ball, you can walk one or two steps with it. A defender is meant to stay three feet away from their opponent. In regular netball, you must throw the ball after holding it for three seconds; in walking netball, we have the luxury of a whole extra second.

And, after 20 minutes of intense play, we let our heart rates settle over chilled slices of orange.

Only two of our group, Marlene and Gina, can be relied on to get the ball into the net virtually every time – so they must always be on opposing sides. The rest of us get a few minutes to practise shooting before we start a match. I don’t remember the net being so high and out of reach in my school days.

I am not sure if we will ever improve but when we get it in, even if it’s a fluke, we are triumphant.

Jenny Bardwell - Reaching for the stars - in their dressing rooms