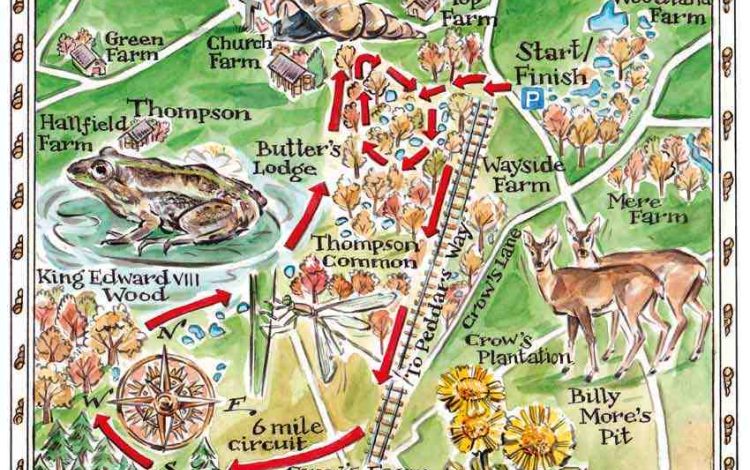 When you first arrive at Thompson Common, it appears simply to be a quiet place with an anonymous name in the middle of rural Norfolk.

On a previous visit, oblivious of its unique qualities, I enjoyed its grassy glades and broadleaved woods much like other ordinary commonland.

But a 1:25,000 map reveals its extraordinary character – this long, leg-shaped slice of green common is pockmarked by scores of small ponds.

Thompson Common is not a famous place, nor a honeypot, but it should be. It is the pingo capital of Britain.

Not bingo – no legs eleven here – and not the clay, animated penguin (although the Norfolk accent does turn ‘pingo’ into ‘Pingu’) but an Inuit word for hill. These ponds were once hillocks of ice beneath the tundra. When the Ice Age ended, some 400 small pinnacles of ice slumped into perfect little pingos.

The most striking change between the 1797 map of Norfolk and today’s is not deforestation – the landscape is more wooded today – but the loss of hundreds of commons, snatched and enclosed by big folk and a few little people too. Thompson Common survived because its incredible concentration of ponds made the land unfarmable. Even so, many of the ponds around its edges were filled in as land was ploughed and ‘improved’.

Today, the common is protected by Norfolk Wildlife Trust, which is also expanding it again, buying adjacent farmland to excavate more ghost pingos.

The minute I ducked into the woods on a dripping wet day, mundane stresses were sloughed away by this peaceful green space. The wood opened into some gorgeous, sheltered glades, filled with the yellow flowers of fleabane. Two roe deer gazed serenely from the wood edge.

The pingos were not immediately apparent, for reality is more subtle than the map, and they were clothed by centuries of marsh plants.

Most pingos were about the size of a typical small village pond and each one was a different, miniature world of marsh plants and insects, with the species varying depending on whether the pond was in sunshine or in deep shade beneath oaks and ash. It would be possible to walk past almost all of them and barely notice them. This time, they were brought into focus because my walk was a guided one, led by Nick Acheson, a brilliant and witty naturalist.

‘Ice Ages are like teenagers,’ he said as he explained the full glory of the pingos. ‘They don’t clean up after themselves.’

As he spoke, a scarce emerald damselfly darted past. It was considered to be extinct in Britain in the 1980s but turned up on Thompson’s pingos. There are 57 other particularly rare species associated with this pondscape, including the pond mud snail (a minuscule beast) and the northern pool frog, the country’s rarest frog, which has been successfully reintroduced here.

Most of these rare and exotic creatures are not visible to casual walkers, which is why there was no café, pay-and-display car park or hordes of visitors. Instead, there were tranquil meadows, scrubby bits and marshy bits, each natural room offering a subtly different experience.

Just the knowledge there are rare things pootling through the undergrowth added a sprinkle of stardust to the walk. I wondered if all the unusual residents of the pingos – the plants, amphibians and invertebrates – have a cumulative effect on this place, and on us.

The richness of Thompson Common can be measured by ecologists and perhaps it can be felt, too. It feels like a place where we can breathe more deeply.

It’s certainly one of those places from where you emerge refreshed, the drive home a considerably calmer experience than the journey there.

Thompson Common car park, NR17 1DP, is behind a layby. Enter common via kissing gate. Follow a path around the common or join the old railway line and walk out and back. Or continue to the Peddars Way footpath and Thompson Water for a longer six-mile round. Another walk is provided by the Great Eastern Pingo Trail