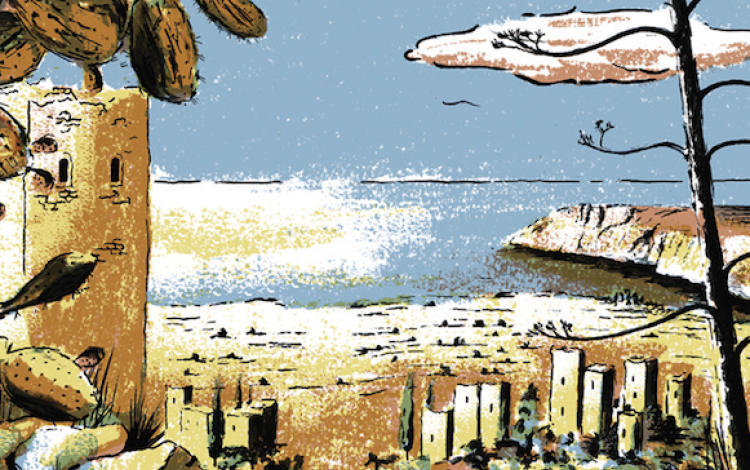 To celebrate Greek Orthodox Easter today, Katyuli Lloyd remembers meeting her hero Patrick Leigh Fermor when she was 20. What a joy then to illustrate new editions of his books about Greece

On a drizzly, windy day in January 2005, my sister and I drove to have lunch with Patrick Leigh Fermor in Dumbleton, Gloucestershire, his family’s English home. I was 20 and he was just about to turn 90. We were led through to the drawing room where Paddy and Mougouch Fielding (the widow of Xan Fielding, Paddy’s fellow Cretan war hero) were waiting.

‘Ah, these are the Champagne girls,’ said Paddy, introducing us to Mougouch. He was referring to our grandfather, Christian Heidsieck (of the eponymous Champagne house), a good friend of his in Greece after the war.

Lunch was intimate, being just the four of us, but elegant and formal. The housekeeper served us a beautiful, three-course meal. Paddy was wearing neatly pressed trousers and a gamboge V-neck jumper, and he seemed very relaxed. But his eyes were alert and aware, and he was keen to chat more about Homer with my sister, a classicist, who’d been to stay with him in his Greek house in Kardamyli, a few years previously. After lunch, we moved through to the drawing room.

‘How’s your Russian?’ Paddy asked. I was studying Modern Languages at Cambridge, and had spent a few months at the Moscow Conservatoire.

I had never thought there could be anything that I could hold over the great traveller, but he said, ‘It’s one of my big regrets that I never learnt a Slavic language.’ I’d brought all his books for him to sign.And–as I think he did for most copies he signed – he made a little illustration of clouds and birds around his name. ‘I realised when I was quite young that, if I needed, I could earn a living from my drawing.’

He was referring to a passage in A Time of Gifts, the first book in his trilogy about his great trek across Europe in the early 1930s. While waiting for his allowance to come through in a foreign city, he took to walking the streets, knocking on people’s doors, asking for commissions to draw their portraits. There were lots of refusals but a few took pity on him.

‘It was a very liberating moment for me,’ he said.

I, too, feel so privileged to earn a living from my drawings and illustrations, and so, when Folio, the publishers, asked me last September if I had heard of Patrick Leigh Fermor, and whether I would be interested in illustrating two of his books about Greece – Mani and Roumeli – I leapt at the chance. The Folio editors had no idea of my family connection with Greece, nor of my grandparents’ friendship with Leigh Fermor, nor of my adoration of the man!

My family have lived in Greece for almost 90 years. In the post-war years in Athens, then a small, intimate place, my grandmother Lily started mixing with an interesting crowd: Paddy Leigh Fermor and his wife Joan, as well as the Durrells, Louis MacNiece, Maurice Bowra, TS Eliot and John Craxton, the artist who produced all Paddy’s book covers.

In 1949, my grandparents moved to the Greek island of Hydra. Craxton, too, painted on Hydra. And it was here that Leigh Fermor wrote much of Mani. My family still have a house on Hydra today.

And so, when the call from Folio came, it was a fantastic opportunity to illustrate a country that I love; that Leigh Fermor also loved. I set out on an observational drawing trip to the Mani, Greece’s southernmost mainland peninsula.

First stop Kalamata, the gateway to the Mani. I passed a tful night’s sleep before catching the early-morning bus to Kardamyli, the stone hamlet which Leigh Fermor made his home from the 1960s until his death in 2011, aged 96.

As daylight broke, I could see the orderly rows of olive trees stretching away from the road, as we wound our way into the village. The bus dropped me o in the small town square.

After a warming cup of tea in a kafeneio, I reread the section from Mani, where Leigh Fermor describes his first arrival there: ‘Most unexpectedly, we discovered a little hotel consisting of a few rooms over a grocer’s shop owned by Socrates Phalireas.’

I thought how much I’d like to find that grocer’s shop. But what were the chances? Hungry and tired, I went to find lunch. I walked along the main street, full of tourist shops with English signs and even English proprietors. Eventually, I found a small taverna with old-fashioned tiles. I ordered an omelette and sat in the pebble courtyard outside, beneath a vine, looking up at the first floor windows, with their wooden shutters flung open. I wondered who lived there.

A lady came out with my omelette. Chatting in Greek, she asked how it was I spoke the language and what I was doing here. I told her my family story and explained my commission. She said, ‘You know, when Leigh Fermor first came to Kardamyli, he stayed here, upstairs, when it was a grocer’s shop.’

Well, no, I didn’t. But what a good start. In the last hour before sunset, I climbed up the hill, to look down into Kardamyli. I sat on a low wall, sketching the horizon, the wide band of the darkening sea, the little bay to the right, the terracotta rooftops, cupolas and the odd tower, the rows of olive trees, with their twisting gure trunks, like dancing ladies, and the feathery dry grass in the foreground.

To continue south, into the heart of the Mani, I boarded a pre-dawn bus for Areopolis. Named after Ares, the god of war, it was where the Greek War of Independence against the Ottomans began. It was raining hard when I arrived at the bus depot, and I felt disheartened at the prospect of trudging around, trying to draw. I walked down damp, cobbled streets. The white-gold stone of the town’s blood-feud towers – where families sheltered from murderous vendettas – shone against the forbidding sky. Fig leaves hung, like large, desperate hands of souls in limbo, over tall walls.

Back at the station, I asked for a ticket south to Yerolimenas. ‘Then fovase moni sou?’ said the man behind the counter. ‘Are you not afraid to go by yourself?’

In Yerolimenas (pictured), a pretty, coastal town, the temperamental clouds were swept aside: the sky was blue, the green sea calm and welcoming. But I wasn’t prepared for quite how remote deep Mani was. I took a short walk around the village. Houses were largely abandoned or half-renovated, roo ess, high stone walls had crumbled, and telephone wires hung, criss-crossed and tangled.

The next day, I walked to the neighbouring villages of Kitta and Nomia, a five-mile round trip from Yerolimenas. Inland, I sketched two silver eucalyptus trees, with dark green leaves framing a dry-docked little boat.

But the gun-metal clouds caught up with me again. Along with the Taygetus mountains, looming purple to my right, the weather conspired to make me feel small and insignificant. Leigh Fermor often refers to this mountain range. But it’s only when you are on foot that you realise how great their presence is, stretching along the spine of the narrow peninsula. Above the thorny bushes and the blue-grey sea, there was a thin streak of white-yellow on the horizon beneath the clouds. What a perfect landscape it was for those vengeful, vendetta-mad Maniot generations who had lived here in their towers, from where they launched cannonades on their enemies.

The road turned into a footpath, and the footpath soon disappeared, so that I was left, winding my way across country, over rocks and red earth. Two towers suddenly appeared like sentries, beyond the cactus ahead: I had found Nomia.

I went down the path into the empty village and settled down to draw a church, but the changeable wind whipped up harder, and I heard a voice call out in Greek, ‘O kairos halaii.’

A man was walking towards me, ‘The weather’s turning. Come inside,’ he said. Any reservations I may have had at the prospect of entering a stranger’s blood- feud tower, in the middle of nowhere, were overshadowed by the excitement of entering a blood-feud tower at all. He unlocked a small door and ushered me in. This was his grandfather’s tower, he explained, as he led me through dark, densely packed rooms, full of boxes and baskets that looked like they had been there for centuries.

At the top of the tower, I looked quickly around, taking in the panoramic view and the nearby towers of Kitta, in gusts of wind. Extraordinarily, when I emerged from the tower, the weather had changed dramatically and I found myself blinking in blistering sunshine.