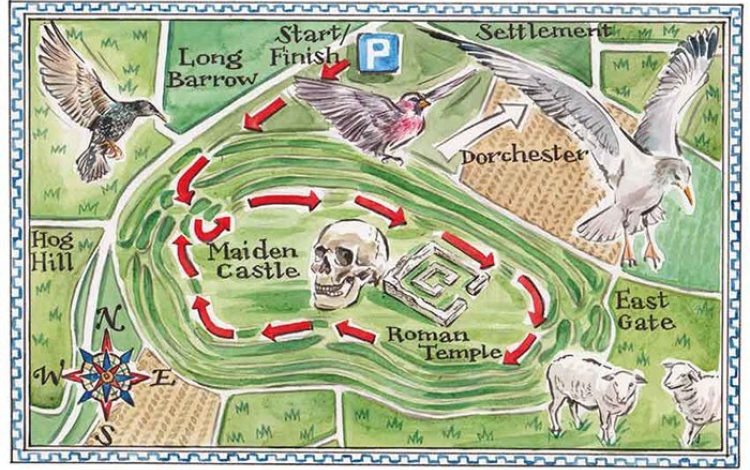 Patrick Barkham walks round one of the country's greatest hill forts

Today, on a hill just south of Dorchester, you can stroll onto slopes that were transformed by Iron Age people into Maiden Castle, possibly the largest hill fort in Europe. But if you’d walked onto these grassy elevations of south Dorset in 43AD, you’d have had to fight your way in.

To climb the chalk ramparts of this spectacular place is to enter a mystery begging for a sequel to The Dig, Ralph Fiennes and all.

The air was filled with the twittering of small birds on a damp, soft, late autumn day as my walking companion, the nature writer Mike McCarthy, and I set off up the hill.

Opening times, according to the noticeboard, were a quaint ‘Any reasonable time in daylight hours’. I was trying to work out what would be unreasonable when Mike revealed that his mother-in-law once visited at dusk and spied a strange green light in the sky. ‘This place is definitely spooky,’ he said. ‘I wouldn’t want to spend a night here.’

We were surrounded by a Hitchcockian abundance of birds, but in mid-morning daylight this was joyful. Gulls exuded a modicum of menace. Great murmurations of starlings and clouds of linnets eddied through the sky like smoke. Among the linnets flew goldfinches, shining like bejewelled princes in a parade of paupers.

As we scaled the ramparts, the neoclassical adornments of Prince Charles’s Poundbury glittering on the northern skyline, Mike told me about Roman emperor Claudius conquering Britain.

Sitting high in Maiden Castle, the local Durotriges people may have been safe from the marauding of rival tribes but it was futile to resist the shock and awe of Imperial Rome, and the castle was ruthlessly taken.

Excavations here in the 1930s by the extravagantly mustachioed archaeologist Mortimer Wheeler and his wife, Tessa, discovered a ‘war grave’ of 52 skeletons, including one with a Roman ballista bolt lodged in his spine. Just to make sure the ancient Briton was dead, the Romans had smashed his skull with an axe. Wheeler’s discovery caused a sensation at the time. Crowds flocked to the castle.

Today only several power walkers and a young kestrel were at large as Mike and I walked anticlockwise to the famed east gate, where the ‘war grave’ was discovered.

The only excavations I could find were millions of tiny wormcasts in this innocuous place of hillocks and sheep.

But, in recent years, rather like the illumination from an LED bulb, a bright but rather boring light has flattened the shadowy story of the violent Roman overthrow of the Durotriges.

Doubts were first cast on the Wheelers’ interpretation when archaeologists leading fresh excavations 30 years ago pointed out that none of the skeletons could be proven to have died defending the hill fort.

The castle’s burial ground turned out to have been well established before Claudius’s invasion. Its bodies weren’t buried in haste and only one revealed injuries consistent with a Roman projectile. Many of the dead could’ve been clobbered by rival tribes well before the Romans.

Wheeler’s ‘burning’ of the castle gates was recast as the humdrum fires of iron foundries. Most damningly, in the century before the Roman invasion, the Durotriges’ settlement sprawled beyond Maiden Castle’s gates. In other words, by the time the Romans arrived, there was no intact castle to storm.

According to modern historians, while Tessa Wheeler hated publicity, her husband adored it. Perhaps Mortimer’s publicity-seeking stories were essential to fund his passion: his Maiden Castle dig was paid for by visitor donations of £1,266 and £3,307 from fundraising in the press.

But perhaps he was just swept away by the romance of this misty landscape and its stories. High on the castle ramparts, with superlative views painted in yellow and ginger by the palette of late autumn, I stood in sympathy with Morty. Better tall tales than the LED beam of contemporary evidence-sifting that chases away all shadows and marvellous mystery.