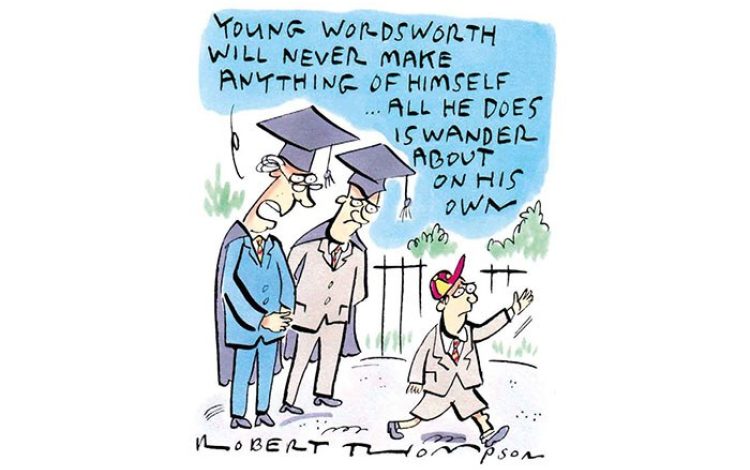 We know Aristotle taught Alexander the Great. But did he write him a school report? Did it say, ‘He is always daydreaming of building empires and must focus more if he is to pass algebra this summer’?

Unfortunately, no record exists. School reports do survive from the early-19th century, though. At King’s College, Canterbury, Speech Day programmes from the 1840s printed the names of boys in order of their exam results and these results appeared in the local paper. At Eton, housemasters sent a letter to parents at the end of each term, although these didn’t have a standard format until after 1850. Called tutors’ letters, they are still written today.

The Elementary Education Act (1880), which made school compulsory for five- to ten-year-olds, triggered the growth of state education, and reporting exam results grew. Commentary was added. Teachers were encouraged to summarise their pupils’ character and progress; to tell it as they saw it, in their own hand and with a classical reference or two, for good measure.

Then, a caustic comment was the teacher’s chance to drive a stake through the heart of the classroom brat or signal it was time to save on the school fees. It was a chance to say something an exam

result couldn’t. Now, heads censor comments that might give offence or trigger a lawsuit. Or, worse, a knuckle sandwich.

The traditional report is almost dead. Squeezed by political correctness, some schools don’t use them at all. Surely it’s right that an idle child be told, ‘The locust years have taken their toll’; and the arrogant taught humility: ‘If he is half as good as he says he is, he will be a Nobel Laureate by the summer term.’

The death of the old school report diminishes society. Comedians are losing a rich source of one-liners and poetic put-downs. Journalists and historians are losing biographical insight.

Worse, we’re losing memories. An A grade is OK. But it doesn’t give you the insight gained from a beautiful sentence like this: ‘An idle boy with just enough wit to pass the exam.’ An exam mark can’t resurrect an entire summer as elegantly as my tutor’s comment ‘Every spare moment he spends in his cricket whites, his love of the game unspoilt this year by Jupiter Fluvius.’

Nor can it remind you what a brat you were, as this report did for a friend: ‘He is not content to remain unheard in the form room: his views are soon known. He also has an annoying habit of being sycophantic when he is behaving.’

Let’s save the old school report. Here’s my plan. First, create a National Archive for School Reports (motto: ‘I didn’t get where I am today without a bad school report’). Secondly, establish a hall of fame to celebrate teachers proficient in old-style report-writing. Thirdly, free teachers from the threat of litigation for comments written in school reports or made at a PTA meeting. Lastly, recruit retired schoolteachers to tutor the new teachers in the ancient art of report-writing.

To get the campaign rolling, I’m calling on Oldie-readers to dig out their old school reports and send them to me. I’m writing a book about the school report and will include the best material in the book. With your help, we can resurrect the old school report.

Do send your reports to editorial@theoldie.co.uk for consideration by the headmaster.

New Editor of the Oldie

Locked down with my daughter - Anne Robinson

My grandfather wrote the Princess’s speech