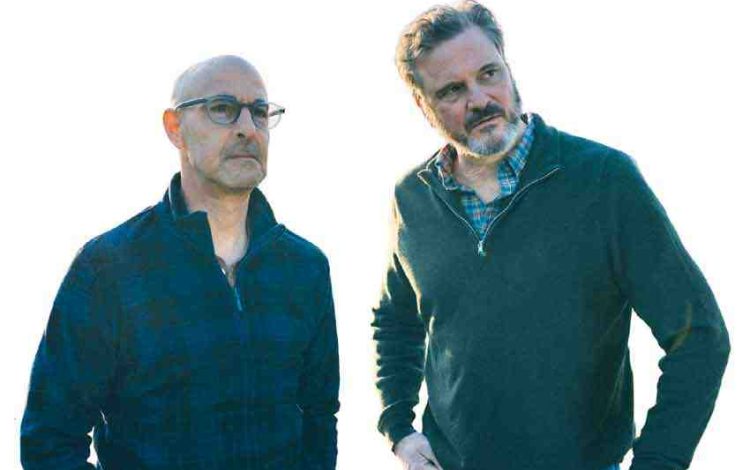 Harry Mount is captivated by this elegiac film, released on June 25

In this moving, melancholy film, Colin Firth is no longer Mr Grumpy – the role he perfected in Pride and Prejudice and the Bridget Jones series.

Instead, he is a loving, gentle, agonised pianist, Sam, who is gradually losing his American writer husband, Tusker (Stanley Tucci), to dementia.

Before Tusker’s mild symptoms get any worse, they make a farewell road trip around beloved old haunts in the Lake District, culminating in a dinner at Sam’s sister’s house.

Colin Firth has played a gay man before, in A Single Man (2009). Then, as in this film, he wisely introduces no campness – a welcome sign of how mainstream gay films have become, with no need to bang a drum or over-inflate characteristics. A sign, too, of Firth’s greatest virtue as an actor – being understated.

For conservative oldies, by the way, it is all very sensitively done, too, with no sexually graphic content.

The film is literally a slow mover. Sam and Tusker’s campervan lumbers at a creaking pace around the top ten autumnal views of Cumbria – where else in Britain, and what season, could be better at delivering picturesque melancholy?

The story, too, is slow. Nothing much really happens, except for Sam’s growing realisation of how quickly Tusker is losing his faculties – and Tusker’s increasing readiness to reveal his despair after years of his doing his best to conceal it.

It’s all a bit one-note (although, speaking of notes, Firth does a very good job of playing Elgar’s Salut d’Amour on screen). The director and writer, Harry Macqueen, is skilled at portraying sadness. But cinemagoers’ tears flow more easily when sadness is cut with humour – that’s why John Hannah got us weeping when he read Auden’s Funeral Blues (‘Stop all the clocks…’) in Four Weddings and a Funeral. This film should make you cry; it doesn’t quite because it’s too unremittingly sad.

Still, Stanley Tucci is adept at reproducing the sudden memory lapses that hit dementia-sufferers mid-sentence. He is convincing, too, at maintaining a chipper, teasing, Noo Yawk state of mind, in a vain bid to hide the awful truth of his accelerating decline.

Both Tucci and Firth are completely relaxed with each other. That ease in each other’s company (and the irritation) make for a more convincing display of love than the hyper-romantic speeches – and the happy ending – Hollywood would demand.

He is the master of the sentence that is self-interrupted through sadness and awkwardness. ‘How long have you…?’ he asks Tusker at one point. You don’t need to be told that the last word of that sentence would have been ‘got’.

The great American director Billy Wilder said of his jokes that if you let the audience work out the punchline in their mind, they’ll thank you for ever.

Well, the same is true of sadness: less is more. Let the audience draw their own conclusions rather than have the actors scream their agony to the rooftops.

You don’t have to say anything to show you’re sad if you’re blessed with Colin Firth’s ability to display intense sadness merely through the eyes – combined with his understated intonation that communicates so much through the tiniest change in volume and tone.

It helps, too, that he is so attractive to man and woman – even when, as here, he sports a bushy, unkempt beard and carries a bit of extra weight. He manages to look glamorous even when he’s doing the shopping in a Cumbrian SPAR outlet.

Has an actor ever been so gifted at portraying the strange anguish of experiencing overpowering emotions and not being very good at displaying them? In other words, at acting the part of a middle-class, middle-aged Englishman in crisis.

Back to university - at 62 - Nicola Foote

My summer of love

Film: The Last Letter from Your Lover - Harry Mount