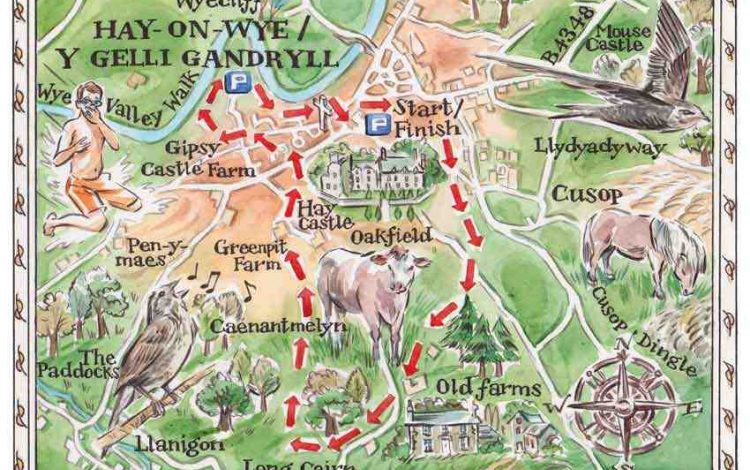 Y Gelli Gandryll, a magical place known to the admiring English as Hay-on-Wye, is ‘a town of books’. Bookshops apart, like the best fictional places – the Isle of Sodor springs to mind – it seems to have one of everything that makes a place interesting.

Of course there’s a school, fire station and library. And then there is Hay Castle, the river, the streams, the mountain, the farmers’ collective. Hay’s original cinema is now a cavernous bookshop, but don’t worry – the original bookshop has built a cinema.

Most small towns used to have everything. Now Hay is an exception – and a deservedly popular tourist town. During its famous festival it becomes a bit too popular, but the festival was online only this year which bequeathed the town just the right amount of bustle – so visitors could enjoy its prettiness.

I took a walk around Heaven– sorry, Hay – on a warm afternoon in May. Sparrows chatted down low, swifts screamed up high and a lad and his girlfriend raced into town for a beer, side-saddle in their tractor.

I sidestepped a gaggle of comely ponies tearing grass from the turf faster than it was growing to follow Llwybr Clawdd Offa, more prosaically known as Offa’s Dyke Path, entering a valley-load of green, flowery pasture and hedges. The May blossom sparkled; the scent of cow hung in the warm air.

I left Offa’s Dyke for a path less trodden which steadily climbed into the hills above Hay and reminded me that a walk is rarely straightforwardly glorious.

One stile was blocked by nettles. Reassuring signposts disappeared. The map showed that the path headed straight through a succession of small farms, but the path appeared unwalked and the map could not tell me whether I should dart through someone’s farmyard, garden or kitchen.

This was terrifying. Like most English people, I scrape subserviently before property rights and am much too cowardly to defy them. (Nick Hayes’s The Book of Trespass is a useful antidote.)

I havered by a gracefully ungentrified old Welsh farm. Eventually, a white-haired farmer materialised from a dark shed.

‘Excuse me, where does the footpath go?’

‘Which one? You want the mountain?’

‘I’m not from London, you know,’ I nearly spluttered, Withnail-style, but the farmer kindly dispatched me through his garden and over a well-kept stile. Once I had negotiated this hurdle, my next challenge was escaping a field of frisky young bullocks.

I hopped into a sunken lane, its banks filled with cow parsley and honeysuckle. Now there was an aerial view of Hay below, blue hills beyond, and the broad Wye Valley snaking east to less interesting England.

At a crossroads of footpaths by a spring, I took the most quirky-looking path which plunged downhill, through Wern Wood – a fascinating piece of wood pasture where sheep grazed beneath fine old trees. It felt like France or Spain, not Wales.

The path descended onto Hay Common, full of rushes, ant hills and gorse, and then on to a miniature gorge and Mynwent y Gelli, Hay cemetery, which featured a striking line of sculpted yews, providing black shade under a Provençal sky.

I twisted through the suburbs and on to the buttercup-filled meadows of the Warren, where Hay was at play beside a generous curve of the magnificent Wye. Bikes were strewn on the banks. Shouts echoed over the valley. Lads hurled themselves from willows into the water. Exhausted bookshop workers breaststroked upstream. Intellectuals stroked chins on picnic blankets. A kingfisher flashed. Couples snogged.

The water was cold and soft and my whole body tingled deliciously after a long, slow, cool swim that was the perfect end to a day in paradise.

Pick up Offa’s Dyke Path from Hay car park. After half a mile, take the path up hill to the right, cross lane and continue past Dan-y-fforest farm and others. At Long Cairn, turn right down through Wern Wood and Hay Common. OS Map: OL13