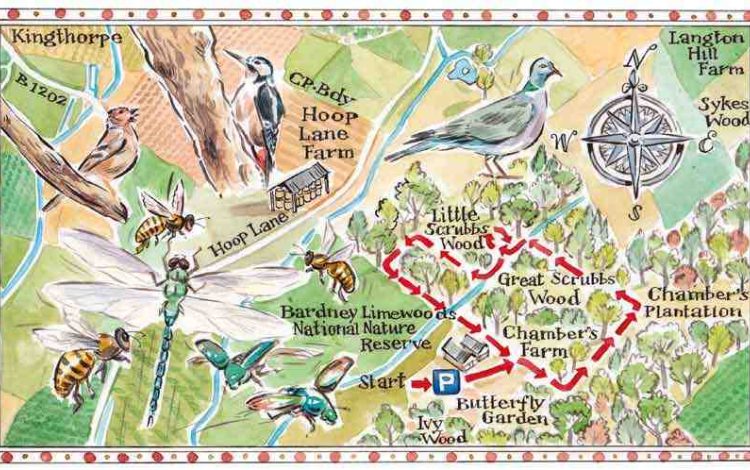 I know a bank where the wild thyme blows. There are oxlips and nodding violet, woodbine and eglantine.

This dream of midsummer must be reached over bleakly rolling flatlands of wheat and Italian rye grass – and there it glowers, in the darkest of greens, a fragment of fairyland poetry in a prosaic landscape.

Nothing billows quite so promisingly as the edge of a wood in the ordered, arable lowlands. So it was with Bardney Limewoods, an unkempt beast of blackthorn, hawthorn, sallow, hazel and small-leaved lime in the middle of intensively ploughed, scalped and tended Lincolnshire.

Forests are exceptional places – for, despite our many cultural celebrations of trees and woods, we are not a nation of woodlanders. As the great chronicler of British woods Oliver Rackham revealed, these islands were never swathed in dense wildwood, and most trees were swiftly felled when our neolithic forebears began their agricultural revolution. The Romans were notorious deforesters. Tree cover has probably remained below 15 per cent ever since.

So to step into a wood at any time of year is to enter a world very different from our own, cocooned from human noise, wind and other pressures. Woods are not necessarily peaceful places, however, for they seethe with life.

My favourite time of year inside a wood is whenever I happen to be there. Each new month brings different delights. But an English woodland in high summer – what magic is this!

Bardney Limewoods was almost silent – and not just because I walked it before the nation was fully released from its lockdown to scatter spent portable barbecues and dog poo over every corner of this merrie land. Apart from the clatter of woodpigeons a-wooing, the birds were entering their post-breeding quiet. The last chiffchaffs sang from a high ash, and a woodpecker called shrilly as it darted among deadwood.

A grassy ride of dappled light beckoned between great pillows of sallow. Above stood oak and small-leaved lime, a relic of warmer climes and a signifier of ancient woodland. The breeze in the canopy above sounded like the wood’s breath.

Woodland music and merrymaking were provided by the insects. Metallic-coloured flying beetles of all shapes and sizes partied with humming bees in the airspace. Above them zoomed the predatory whirr of dragonflies. Through the grasses jinked midsummer butterflies: meadow browns, gatekeepers and ringlets.

In the trees above, a flash of something silver – a purple hairstreak. These woods have found recent fame as a butterfly hotspot, an outpost of southern England that has welcomed the mysterious reappearance of once-extinct tree-dwelling species the purple emperor and the black and brown hairstreaks.

Moving from Great Scrubbs Wood to Little Scrubbs Wood, I reached two unexpected meadows, where conifers had been cleared. They’d been planted during the postwar industrial forestry boom, which bizarrely determined that ancient woods were a good place to plant new trees. Rackham called them ‘the locust years’ for the life they stripped from old woods.

Life had definitely returned. These clearings were hummocky with meadow ants and waving with knapweed, scabious and other wildflowers. Baby oaks poked through the grasses all over. If these flowery glades weren’t cut every summer, the meadow would surge into forest again within a decade.

This was a short walk over several hours. An owl called and I jumped, thinking I must’ve really lost track of time – but it was only mid-afternoon. As the sunlight lowered, I bathed in the greenery and pondered life both seen and unseen. I tried to imagine the parallel world beneath my feet, the soil’s damp fecundity and the throbbing network of mycorrhizal fungi, the wood-wide web, which fed such miraculous flowering and fruiting.

I wished to plug myself into this life-source, too. It was only when I drove away, as refreshed as if emerging from a bewitched slumber, that I realised I had connected myself to the wonder of an English woodland in the best way we unrooted animals know – by taking a walk.