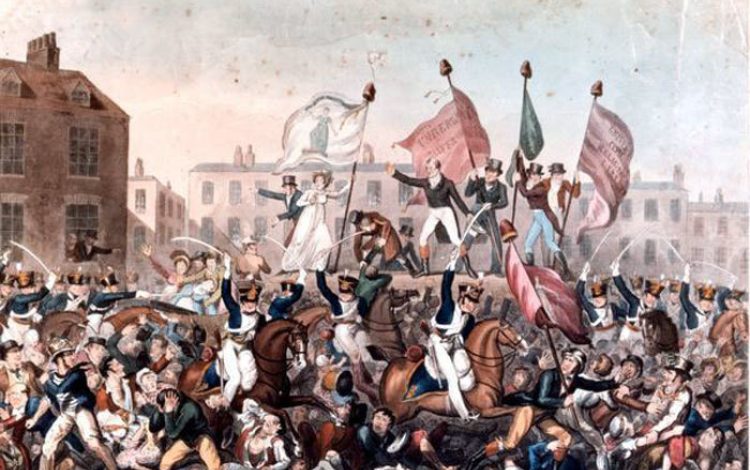 To Henry Hunt, Esq., as chairman of the meeting assembled in St. Peter's Field, Manchester, sixteenth day of August, 1819, and to the female Reformers of Manchester and the adjacent towns who were exposed to and suffered from the wanton and fiendish attack made on them by that brutal armed force, the Manchester and Cheshire Yeomanry Cavalry, this plate is dedicated by their fellow labourer, Richard Carlile:[1] a coloured engraving that depicts the Peterloo Massacre (military suppression of a demonstration in Manchester, England by cavalry charge on August 16, 1819 with loss of life) in Manchester, England. All the poles from which banners are flying have Phrygian caps or liberty caps on top. Not all the details strictly accord with contemporary descriptions; the banner the woman is holding should read: Female Reformers of Roynton -- "Let us die like men and not be sold like slaves".
View Full Size
1
of 1

201 years on, we must remember the victims of a chilling massacre, says David Horspool

On 19th August 1819 an unusual editorial appeared in the Times.

Referring their readers to ‘the deplorable action which took place during Monday’s Manchester meeting’, the writers lamented ‘the dreadful fact that nearly a hundred of the King’s unarmed subjects have been sabred by a body of cavalry in the streets of a town of which most of them were inhabitants, and in the presence of those Magistrates whose sworn duty it is to protect and preserve the life of the meanest Englishman’.

Up to this point, the sympathies of the Times were all on the other side. The event that changed their mind is known to us as Peterloo. The unarmed subjects, who had gathered in their thousands on St Peter’s Field, Manchester, had been displaying banners calling for universal suffrage and parliamentary representation. (Manchester, with a population of almost 100,000, had no MP.)

To a local and national government that could associate those principles only with riot and revolution, the idea of a peaceful demonstration to uphold them was apparently inconceivable.

The star speaker at the meeting that day, whose arrest was a catalyst for the indiscriminate violence of the military forces, was Henry ‘Orator’ Hunt.

Hunt was a gifted speaker and a showman of genius, treated by papers such as the Times as some combination of braggart and terrorist. They sniggered that his appearance ‘has not been unaptly compared to that of a cow-jobber’, which doesn’t sound like a compliment. They also called him the ‘most impudent man living’.

In Manchester in August 1819, Hunt’s arrival, though ostentatiously peaceful, was treated as a prelude to an uprising. Among the 15 people who died from sabre cuts or crushed under horses’ hooves were a two-year-old and several women. Many of the roughly 500 injuries reported were permanent ones: limbs hacked off; heads bludgeoned. It’s easy to see why even some of the most committed opponents of reform were ashamed.

Crucially, however, that shame did not extend to the government of Lord Liverpool and his Home Secretary, Viscount Sidmouth. They continued to believe that the Manchester outrage was what a fellow minister, Lord Eldon, called ‘treason’. And they reacted to it not only by arresting the ringleaders but by introducing punitive legislation aimed at stopping all such meetings.

Two hundred years on, Peterloo still occupies a rather shadowy place in our collective historical consciousness. A Mike Leigh film that jumped the anniversary gun last year was not much of a hit. Perhaps that’s because, until its genuinely shocking and brilliantly filmed climactic scene, it seemed to be going for a sort of amateur-dramatics feel: cringe-inducing overacting layered on top of extended scenes of expository chat about the Corn Laws.

In Manchester itself, Peterloo is commemorated as integral to the city’s radical past but, even there, it seems to be doomed to controversy. A proposed monument to the massacre by the artist Jeremy Deller has been delayed after it was pointed out that it would be inaccessible to the disabled. That wasn’t a great look for a celebration of the fight for equal rights.

Then there is the name itself. The link between Wellington’s great victory and the events in Manchester four years later was, apparently, first made by a special constable who forced his way into a

It was the Manchester Observer

that, five days later, coined the word ‘Peter-loo’ as an ironic description of a day of infamy. A blue plaque on the side of a hotel by the former St Peter’s Field used to commemorate merely ‘the dispersal by the military … remembered as Peterloo’. This has now been replaced by a red one, which gives a death toll of 15 and describes the events as the Peterloo Massacre.

But there still seems to be some popular confusion. One educational website about the city refers to the Duke of Wellington’s ‘involvement in the Peterloo Massacre’, which may be a fair description of the duke’s attitude to reform, but gives him a role he did not play.

What Peterloo has lacked, with the exception of E P Thompson’s consideration of it in his classic The Making of the English Working Class, is a proper scholarly investigation – a foundation on which, in the normal course of things, popular understanding can be based.

A new book by a Manchester historian, Dr Robert Poole, Peterloo: The English Uprising, looks very much as if it will fill that gap.

We should certainly remember Peterloo – if by that we mean remember that, as politician Sir Francis Burdett

put it at the time, ‘Englishmen … had done such deeds.’ Deeds that still chill the blood.

Words and Stuff: The roly-poly raggle-taggle of ricochets