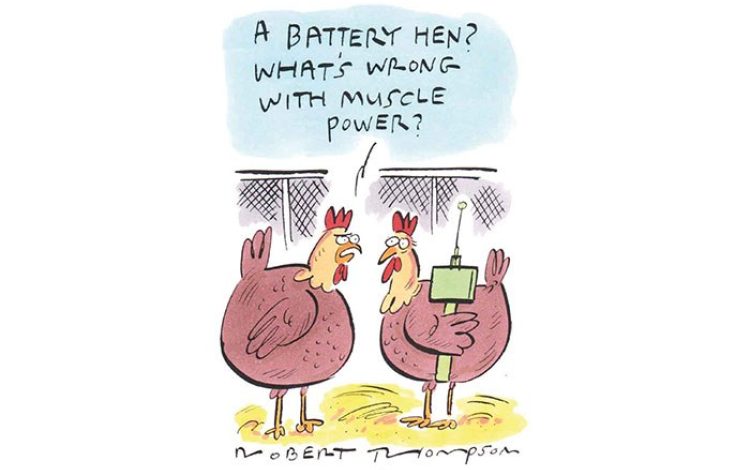 Tom Hodgkinson is concerned about a new and worrying phenomenon on the streets of London: the appearance of a strange variety of battery-powered personal-transportation devices

As I pedal my old bicycle around the streets, I gaze witheringly at the poor saps who have been gulled into forking out thousands on these absurd contraptions.

They look bloody silly. There was a great noughties television show, Nathan Barley, written by Chris Morris and Charlie Brooker. It followed the misadventures of a ridiculous fashion victim who was always desperate to keep up with the latest trends. In one episode, he is seen wearing an early version of earpods. In others, the prophetic writers have him zipping to meetings on an electric scooter.

Brooker’s vision has come to pass. Nathan Barleys are everywhere. These electric or ‘micromobility’ devices are being heralded and sold as an ecologically sound alternative to cars which belch pollution and rely on fossil fuels. In fact, there’s nothing new here – remember milk floats and the Sinclair C5?

The eco argument doesn’t stand up. Electric bikes need batteries, which require exotic minerals mined by dirt-cheap labour in faraway places. They use electricity which has to be created and delivered. Not very green.

How silly these vehicles are. Take the electric unicycle, costing up to £2,000. This device has a single wheel on which the user stands. The website says the unicycle is a ‘travelling beast that will take you anywhere in no time’. It also claims you’ll feel ‘like a super-hero’ while riding one. Their aficionados call them simply ‘wheels’ and they can go for 60 miles on a charge.

Then there are the hoverboards. These have two wheels with a little platform between them. Costing from two to five hundred quid, they claim a range of ten miles. Again, completely daft and unnecessary.

Electric skateboards also make a menace of themselves on the streets of London. Controlled by a wireless, handheld remote, they can go for five to 20 miles on a charge. The marketing message on one electric-skateboard website appeals to our ignoble impulses with the claim ‘Nothing beats the feeling of flying past a struggling cyclist with ease.’

Electric scooters are ubiquitous. London has allowed three electric-scooter rental companies to ply their trade. Conveniently for these start-ups, privately owned scooters are banned from the streets, even though this ban hasn’t deterred many people. Over 130 pedestrians have been injured by electric scooters in the past year.

Lime is the most egregious company. They say they have an altruistic ‘mission’:

‘Lime is founded on a simple idea that all communities deserve access to smart, affordable mobility. Through the equitable distribution of shared scooters, bikes and transit vehicles, we aim to reduce dependence on personal automobiles for short-distance transportation and leave future generations with a cleaner, healthier planet.’

In fact, Lime is just another company out to make money. It was once valued at $2.4 billion dollars but lately its investors lost confidence and a recent deal valued it at a mere $510 million.

Lime’s competitors in London are Dott, an Amsterdam start-up which recently raised $85 million in investment, and the German company Tier, valued at nearly one billion dollars.

Electric scooters are dangerous, too. The latest figures reveal three riders of e-scooters were killed in the last recorded, while 199 were injured.

Why a community like London should be helping these non-UK moneymaking schemes is beyond me. They take our money and put it investors’ pockets.

The least undignified and only legal option of the whole lot are electric bicycles. They cost £1,000 or more and use batteries to reach 15.5 mph. They can go for 30 miles before running out of charge. Your legs are used a bit, but essentially this is a way of getting around without using much of your own energy. Instead, you use energy from the battery which you charge overnight at home.

The point that their users make in their defence is that they take the effort out of cycling. Yes – but the effort is precisely the point in cycling. It’s good exercise.

We already have a thoroughly ecologically sound form of transport: the bicycle. It uses precisely zero energy from fossil fuels. It uses only renewable energy – muscle power, derived from vegetables and meat, and gravity when you’re freewheeling downhill. It gives the user a free workout and a glorious experience.

And there’s another mobility trick that gives the user exercise, uses no fossil fuels and costs precisely nothing. It will also leave our children with a cleaner, healthier planet. It’s called walking.

Travel: In the footsteps of the first great escape