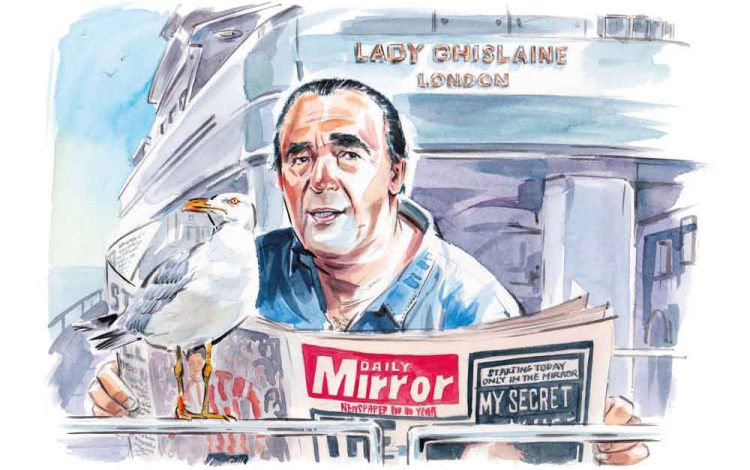 He was a crook in massive debt – but did he jump? Peter McKay recounts Rupert Murdoch's answer

Fall: The Mystery of Robert Maxwell by John Preston

‘He had come a long way to this blue lawn, and his dream must have seemed so close that he could hardly fail to grasp it. He did not know that it was already behind him, somewhere in that vast obscurity beyond the city, where the dark fields of the republic rolled on under the night.’

Born on 10 June 1923 in Solotvino, Ruthenia, in what was then Czechoslovakia, ‘Robert Maxwell’ was actually called Ján Ludvík by his parents, Mebel and Chanca Hoch, Jewish peasants who occupied an earthen-floored, two-room, wooden shack with their nine children. Teenager Jan escaped to France after the Nazis closed in. Most of his family died in Auschwitz.

Having changed his name four times by the time he was 23, he denied he was Jewish until close to the end. Wife Betty, a French Protestant with whom he had nine children - two of them died - believed that a visit they both made to Solotvino altered his feelings for ever.

‘He was convinced that, had he stayed at home, he could have saved the lives of his parents and younger siblings. Nothing he had achieved in life would ever compensate for what he had not been able to accomplish – the rescue of his family.’ Near the end of his life, Maxwell visited the Yad Vashem Holocaust Memorial in Jerusalem. Tearfully, the ‘ billionaire’ said there, ‘We were very poor. We didn’t have the things that other people had. They had shoes and food and we didn’t. At the end of the war, I discovered the fate of my parents and my sisters and brothers, relatives and neighbours. I don’t know what went through their minds as they realised they had been tricked into a gas chamber.’ He had once told his sensitive eldest son, Philip: ‘Unlike you, I keep the door to my haunted inner chamber firmly closed.’

Preston is unsparing in his account of Maxwell’s megalomania, greed, commercial duplicity and general grossness. We are told that he once ate half of his family’s 40-pound Christmas turkey, drove a car at 90 mph while shaving and was described by Clive James as looking like ‘a ton and a half of half-cured ham wrapped in a white tuxedo’.

The Savoy’s chief barber dyed his hair and eyebrows coal -black once a week and he once sent a lackey to London on Concorde to pick up medals he wanted to wear at a New York dinner. He ritually ‘peed over the side of the building’ before departing the Mirror’s Holborn HQ by private helicopter, disallowed the paper’s prize-winners for being ‘too middle class’ and, after being put in charge of House of Commons catering, shipped the best wines to the cellar of his rented Oxford mansion.

The bigger sins seem greatly to overwhelm his virtues. He won a Military Cross for bravery under fire in the Second World War but he was known as ‘Killer Maxwell’ for the alleged pleasure he took in murdering captured Germans. He was praised for revolutionising academic publishing with his Pergamon Press. It is suggested this was based on texts he looted from postwar Germany, with the connivance of our own MI6, with whom he was in cahoots. Hailed after his death as ‘The Man Who Saved The Mirror’, he had in fact used it egregiously to promote himself, prior to looting its pension fund in a doomed attempt to prop up his by then tottering business empire.

In 1971, the Department of Trade, reporting on his sale of Pergamon to Leasco, said he was not ‘a person who can be relied upon to exercise proper stewardship of a publicly quoted company’.

On November 5, 1991, accompanied by his son Kevin, he was due to meet the Governor of the Bank of England, Eddie George, to discuss the solvency of their business empire. Kevin told his father – cruising on his yacht, Lady Ghislaine, en voyage to Santa Cruz, in northern Tenerife – that he must come back to the UK so they could face the music together. Maxwell refused after ‘a shouting match’.

After docking at Santa Cruz, Maxwell dined alone at 5-star Hotel Mencey, where he appeared ‘out of breath’. Returning to Lady Ghislaine after 10pm, he told Rankin to set sail. He wanted to ‘cruise all night’.

At 11.15pm, Ian Maxwell called by satellite phone and found his father ‘in a good mood’. Reminding his father that they were due to meet the following day, Ian signed off with ‘See you tomorrow, then.’ Maxwell replied, ‘You bet.’

When a member of the crew, Graham Leonard, came on watch at 4.10 am, he saw Maxwell by the stern rail, wearing a white dressing gown, gazing at the lights of Gran Canaria. He said his bedroom was too hot. So Leonard turned on the air conditioning. He left Maxwell standing at the stern rail at 4:15 am.

At 4:45 am, Maxwell called the bridge to say his bedroom was now too cold. The air conditioning was turned off. At 6am, Kevin Maxwell phoned his father. No reply.

At 9.45 am, Lady Ghislaine docked at Santa Cruz. A banker from Rothschild in New York called. No reply from Maxwell’s stateroom. ‘Mr Maxwell is still asleep,’ he was told.

Half an hour later, another urgent business call from New York. Again no reply. Rankin tried other internal phones. No dice.

The main door of his stateroom was locked. They had searched the boat from top to bottom three times –‘we were even opening drawers’ – and now they were in his stateroom.

When they found his body floating belly up, a large, nylon harness, used to rescue cattle and horses from flood areas, was needed to lift the 22-stone carcase from the sea.

Did he fall in accidentally, jump, or was he murdered? Preston is unable to solve this mystery. But Rupert Murdoch, who Maxwell called ‘a moth-eaten kangaroo’, had no doubts. ‘He jumped.’

Peter McKay has worked for the Daily Mail since 1982

My shed is my castle - Neville Hodgkinson

The sublime beauty of wrecked England