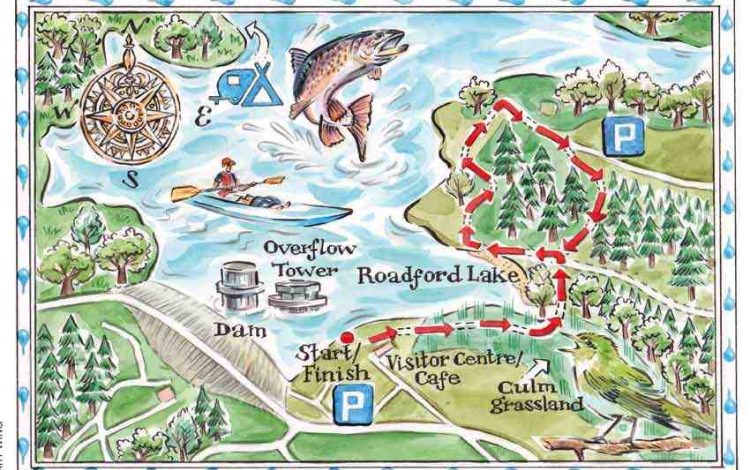 What at first appeared to Patrick Barkham be an ancient, unchanged and wild landscape was, in fact, completed in 1990

The vast lake snaked onwards – a collage of headlands, forest and silver water that appeared without end. The scene at Roadford Lake looked, to my uneducated eye at least, as ancient, natural and unchanging as any ‘wild’ part of Britain.

So it was disorientating to read on my pink-jacketed OS map, which I still considered more or less contemporary, that this vast Devonian lake did not exist when the map was printed in 1986.

The map marked open fields, farms, the valley of the River Wolf and, in blue script, ‘Roadford Reservoir (under construction)’.

This landscape of lake, forest, footpaths and distant wind turbines had been assembled in the 30 years since the dam was completed in 1990 to supply Devon towns with water.

The drive to the lakeside café and walking trails on a new road across the top of the dam were a bit of a giveaway, but if I had been brought here blindfolded I would have never guessed it was all so ersatz.

The division between artificial and natural is rarely clear in a country so conclusively shaped by people, and I guess Roadford Lake became a natural-seeming place the moment other species moved in. For here they were, as soon as we set off down the wheelchair-accessible lakeside path: willow warblers singing somnolently from sallow thickets, a woodpecker drumming on an oak and Freya, a springer spaniel, who delighted in bathing on a small beach by the lakeshore.

I’m a romantic – so I tend to mourn what’s been lost, imagining the old hedges, gateposts, pastures and farms beneath the silvery water.

The reservoir was planned following the drought of ’76, but stalled under environmental objections. Were the residents of Hennard Farm, Hennard Mill and other lost Wolf-valley landmarks devastated by their losses? Were surviving farms grateful for a waterside view? Perhaps wounds have healed.

The present rapidly overwhelms the past, and newcomers would not be struck by any ghosts of past landscapes here, apart from at low water, when lanes can be seen disappearing into the lake. When I visited, there was no unsightly tidemark around the shore as in a dirty bath. As one of South West Water’s many signs revealed, water levels were currently 94 per cent of capacity.

The shallows were gin-clear except for some brown churn where the spaniel swam. Walking by water always makes me want to swim, but more signs informed us that swimming wasn’t permitted so that the water stayed clear and clean. We humans were too dirty for this sparkling reservoir.

We entered a conifer plantation that had rapidly grown to maturity. Further signs informed us that tree-thinning work was ensuring the forest stayed healthy. Helpful signage feels bossy after a while. Natural landscapes wouldn’t require so much guidance.

The next sign I encountered informed us that one pretty meadow was a surviving example of culm grassland.

This nutrient-poor, orchid-rich place, traditionally grazed by Devon red cattle in summer, is unique to this region, and home to the rare and declining marsh fritillary butterfly. South West Water was taking extra special care of this meadow, although my inner cynic wondered how much had been lost to the reservoir.

I vowed to spend the rest of this walk not imagining the losses but considering the gains. Generally, if we add water to a landscape, we boost wild diversity, and the lake, a sanctuary for wildfowl in winter, was rich in brown trout. It may soon become home to osprey as well.

Roadford Lake was also home to many happy people, who visit it to fish, sail, kayak or walk. Publicly accessible waterside – even with lots of rules – is cherished by everyone. And Roadford, barely five minutes from the A30, has a café, a toilet and a billion times more tranquillity than any roadside services for anyone sweating down to Cornwall. Just don’t try and cool off with a swim.

Roadford Lake, Broadwoodwidger, Devon PL16 0RL. Follow the trail past the café for a there-and-back lakeside walk with a variety of loops in the forest. Open seven days a week, 8.30am-5pm