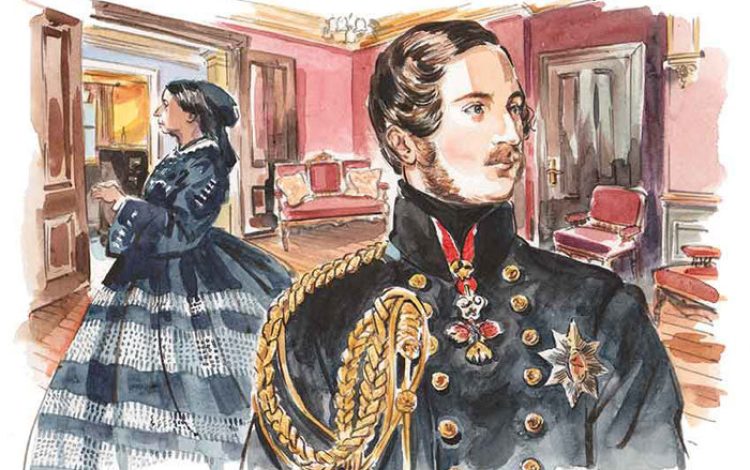 Kate Hubbard reviews Prince Albert: The Man Who Saved the Monarchy by A N Wilson

A few months before the publication of Prince Albert, I went to hear A N Wilson talk about his forthcoming book at a small literary festival.

A couple of remarks tossed into the sea of (mostly) silvery heads caused something of a stir: first, Wilson likened the marriage of Victoria and Albert to a same-sex union between two women; and secondly, he mentioned Albert’s name in the same breath as that of the sinister Rob Titchener of Archers fame. This was intriguing. Was he really suggesting that the royal marriage could be seen as a case of coercive control with a transgender twist?

There was of course an element of facetiousness (not a quality to be found in Albert) in Wilson’s comments, but a serious point, too. In his earlier biography of Victoria, he described the marriage as the stormy partnership of two very strong wills. Here he doesn’t so much deviate from that line as embellish it. For Albert, as Wilson rightly says, affection ‘went hand in hand with control’. That the royal couple referred to each other as ‘my Master’ and ‘my Child’ says much.

Victoria’s nine pregnancies, and the post-natal depressions that often followed, allowed Albert, who longed to be more than a mere consort, to get his hands on the dispatch boxes.

Albert could never match his wife in the passion stakes. Victoria wanted unceasing ‘ecstasy’ and ‘opera’; he, like many men, a quiet life. There were frequent rows, after which Albert would retreat and compose an admonishing letter, as in 1855 when he told Victoria that ‘the four weeks of unbroken success in the hard struggle for self-control cannot fail to strengthen your self-confidence’.

Such a missive might have enraged further, but Albert knew how to play on Victoria’s insecurities and invariably she would be filled with remorse and determination to be more worthy of her ‘Angel’. Until the next outburst.

For Wilson, Albert, with his love of interior decoration, clothes, music, order etc, ‘seems to the outward eye to be gay in all but sexual preference’ – which brings us to the royal marriage as ‘an intense relationship between two women’ (not a woman and a closet homosexual).

‘When their domestic life was bathed in sunlight and joy, it had the serenity of their happy contemporaries the Ladies of Llangollen. When it began to go sour, it cascaded into the psychodrama of The Killing of Sister George.’

This seems an eccentric, if entertaining, view. Albert may have had a large component of the feminine in his make-up – Victoria observed shrewdly that ‘He would have made an excellent nursery-maid’ and she meant it as a compliment – but he was just as interested in engineering or foreign policy as in carpets or jewellery. What’s remarkable about Albert is the breadth of his interests.

Did Albert’s Coburg boyhood hold the key to the man? Its defining event – or so you might think – was the loss of his mother when he was just five. Louise was sent packing, and subsequently divorced, by Ernst I, Duke of Saxe-Coburg-Gotha (conspicuously unfaithful himself), for taking a lover.

How Albert felt about his mother’s banishment we don’t know, but he did not appear to hold it against his father, who, despite being a ‘deplorable husband’, provided an excellent academic and cultural education for his sons.

Albert’s early emotional attachments were all to men – his brother, his tutor and his valet – and as an adult he (like Victoria) is seen by Wilson as searching for father – not mother – figures. He was entirely indifferent to female charms and would always be most at ease in male company, especially that of professionals such as scientists, academics, artists and inventors, who liked and respected him in return. (The upper classes sneered; as ‘a know-all who really did know best’, Albert was doomed to unpopularity.) What he certainly took from his childhood was an almost hysterical horror of sexual impropriety.

Albert’s political ambitions were frustrated and his hopes for a liberal, united Germany came to nothing, but what he achieved in 20-odd years is truly astonishing: a photographic record of the works of Raphael, social housing projects, the reform of university education and the Great Exhibition, on the profits of which Albertopolis – the South Kensington museums – was built.

Whatever he undertook he pursued with the utmost rigour. As Wilson puts it, when Albert ‘found his best roles, he was a sort of civil servant in a coronet’.

Albert has not been well served by biographies and the handful that exist are solemn affairs. One of the pleasures of Wilson’s book is the wit and verve with which it’s written, and he does a fine job of reminding us of the many reasons to admire Albert, even if we can’t love him.

There’s been no comparable royal figure before or since.

Sex in the city