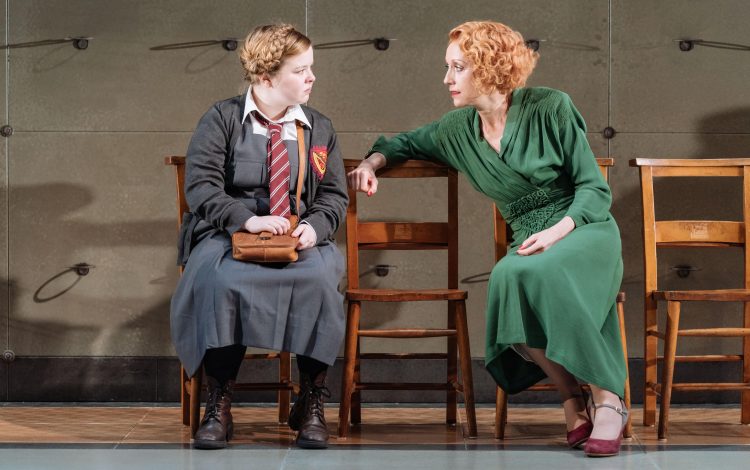 The Prime of Miss Jean Brodie

David Harrower’s adaptation of Muriel Spark’s The Prime of Miss Jean Brodie at the Donmar Warehouse is distinctly superior to its predecessor by the American screenwriter Jay Presson Allen. That production was first staged in 1966, five years after the novel’s publication. Presson Allen’s version was a huge commercial and critical success in theatres around the world and was made into a film starring Maggie Smith, who won an Oscar for her performance in the title role.

In her later years, Spark would say to interviewers, myself included, ‘You’re not going to ask me questions about that book, are you?’ She believed, rightly, that some of her other slim masterpieces were worthy of discussion, too.

It was therefore a surprise to learn from the programme that she gave Harrower the go-ahead for a new theatrical Brodie shortly before her death in 2006. The date is important, since it shows how seriously Harrower has applied himself to the task.

He has taken the last lines of the book as his starting point. Sandy, one of Brodie’s star pupils at the Marcia Blaine School for Girls, Edinburgh, is about to become Sister Helena of the Transfiguration. The Mother Superior at the convent has given the novice nun permission to speak to a reporter from a Scottish newspaper about The Transfiguration of the Commonplace, a strange study of psychology she has written. The reporter’s interview with Sandy provides the solid framework for the play.

Harrower respects the deep seriousness of Spark’s glancingly comic art. The audience is aware from the beginning that it is Sandy who will be the cause of Brodie’s downfall.

Rona Morison is Sandy to the life – the quizzical sceptic who turns herself into believing in a higher power. Morison cannot be faulted in the subtle attentiveness she brings to the part. Her classmates in the ‘Brodie set’ have been reduced in number, though the unhappy Joyce Emily, cut by Presson Allen, has been restored.

The men in Brodie’s life – the music master, Gordon Lowther, played with a finely measured combination of primness and reticent lust by Angus Wright, and the art teacher, the raffish Teddy Lloyd, well acted by Edward MacLiam – are still around to disturb the object of their affections, the unattainable Jean Brodie. Lia Williams is magnificent as the free-spirited Brodie in her effervescent prime, announcing that Giotto, pronounced in Kelvinside Italian, is the greatest painter, and rhapsodising over the wonder that is Benito Mussolini.

We are in the 1930s and Fascism has no stronger supporter than this lonely, fantasising woman, which is how Williams presents her, with none of the camp tricks employed by Maggie Smith.

The always excellent Sylvestra Le Touzel is mordantly funny as the Calvinistic headmistress, Miss Mackay, and the girls couldn’t be bettered. Polly Findlay’s production is seamless, and Lizzie Clachan’s set, encompassing schoolrooms and convent, is Sparkian in its economy.

As, of course, is Harrower’s timely version of this jewel of a book, which contains one of my favourite sentences in contemporary fiction. Spark is referring to Sandy when she writes, ‘By now she had entered the Catholic Church, in whose ranks she had found quite a number of Fascists much less agreeable than Miss Brodie.’

The revival of Brian Friel's Translations, superbly directed by Ian Rickson at the Olivier Theatre, is equally deserving of praise. The play is set in 1833 in Donegal, at a crucial time in Irish history. British soldiers are engaged in making an ordnance survey with the intention of anglicising Irish place names. A new national education system has been designed so that English will become the official language.

The action of Translations mostly takes place in the rural hedge school run by Hugh, a man as conversant in Greek and Latin as he is in Gaelic, who is fearful of the changes the British are instigating. His son, Owen, who is bilingual, returns home after a long absence. He tells his father that he is acting as a translator for the British.

When the troops arrive, the play suddenly achieves real depth. There are two tremendous scenes. In the first, Owen (a supremely confident performance by Colin Morgan) and the English officer Lieutenant Yolland are studying a map of Donegal and thinking up names that convey something of their original Irish meanings. It’s a comically tortured process.

The second involves Yolland again. He has fallen in love with a local girl, Maire, who yearns for a new life in America. She reciprocates his feelings, but they are divided by language. Their awkward wooing is beautifully performed by Judith Roddy and Adetomiwa Edun, a very good black actor whose casting is completely justified.

Brian Friel has the Irish characters speaking English that the English cannot understand until Owen comes to the rescue of both. The conceit works.

Ciarán Hinds is impressive as Hugh. Seamus O’Hara as Manus, Owen’s older brother, who knows English but refuses to speak it, and Michelle Fox as Sarah, who has a speech defect, are very touching.

Rae Smith’s setting, with distant views to the Donegal hills, and Stephen Warbeck’s evocative music add to the pleasures of the production.

Theatre: Heisenberg: The Uncertainty Principle and The Lady from the Sea