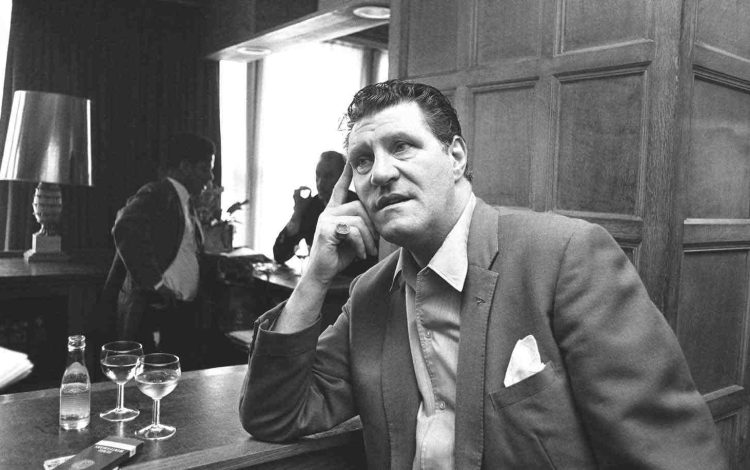 The first time I met Tommy was when I wrote for one of his Thames Television shows in the early 1970s.

We were rehearsing in a church hall in Hammersmith. One afternoon, we nipped out for a drink in the Britannia pub nearby. If you were with him, one to one, he’d buy you a drink. But he never knowingly bought a round. He’d say, ‘I’m not buying drinks for strangers.’

There were only three people in the pub. One of them looked up and said, ‘Oh, it’s Tommy Cooper. Can I tell you a joke?’

So he started telling the joke: ‘Two men walk into a pub…’

Tommy suddenly interrupted and said, ‘Hold it.' He turned to the barman and asked, 'Have you got a bit of paper?’

He got the bit of paper and the man continued: ‘Two men walk into a pub…’

Tommy interrupted again and said to the barman: ‘Have you got a pen?’

Then the man went on: ‘Two men walk into a pub…’

‘Is the name of the pub important?’ Tommy asked.

By this time, the pub is filling up and everyone is noticing what’s going on. The man is now red and embarrassed and still trying to tell the joke. At this point, a cameraman from the show comes in.

‘Harry, you’ve got to hear this joke,’ Tommy says. Then he turns to the man and says, ‘Would you mind starting again?’

Tommy had this sadistic side to him. He did a similar thing in a pub with a horseshoe bar - where you could look across to the other side of the bar.

When Tommy was on tour, he couldn’t walk down the street without someone asking for an autograph.

In London, funnily enough, he didn’t get much trouble. So he could go on the Tube. Once he was on the Underground, when a poor old beggar with a dog started walking up and down the carriage, saying, ‘I need some food.’

Tommy looked up and said, ‘Eat your dog.’

He had a fiendish quality – which could also be very funny. At a Water Rats charity lunch, Dean Martin came along once. Tommy stood up to speak.

‘It would have been great if Jerry Lewis had been here,’ Tommy said. ‘Along with that one he works with. That Italian.’

Everyone was laughing – including Dean Martin. Now why would Dean, who had no idea who he was, laugh?

Tommy had a quirky quality. He had funny bones – that indefinable element. He was tall and gangly and played up his clumsiness. But he wasn’t remotely clumsy.

His magic act was apparently chaos. He would be trying to loosen up three interlinked metal rings and then he’d just throw them away.

In fact, he was a brilliant magician – but there are 100 brilliant magicians in this country. He’d say, ‘I’m the fool’ – and that’s what made him unique. It was an extraordinary feat – the audience would realise what a gifted magician he really was and laugh at his mistakes.

It was all meticulously planned. I walked past his table of props once. And it was all written out: ‘Bottles bottom right’; ‘bowl centre of table’.

Tommy loved props – even off stage. I was once in the pub next to Thames TV in Teddington. I was chatting to a couple of friends who told me they were meeting Tommy but he was late. And then he suddenly turned up, in dressing gown and pajamas. ‘I’m so sorry I’m late,’ he said. ‘I overslept.’

He had gone to all the bother of visiting the wardrobe at Thames TV just for this one gag with friends.

His most famous prop was his fez. He used to wear a pith helmet. Then, one day in Cairo in the war, working as a NAAFI entertainer, he forgot the pith helmet. He was in a restaurant, where the waiters wore fezes. So he just borrowed one from a waiter and it got a huge laugh.

That shows how eccentric – surreal, even – his comedy was. In one act, there was a pedal bin on stage. A few minutes in, he’d suddenly notice it and say, ‘What’s that?’

He’d beam with delight, like a kid with a new toy. He’d turn his back to the bin and work it with his heel.

He was a complete one-off. You can’t say of any other comedian he’s ‘a sort of Tommy Cooper’. One or two comedians tried to copy his clumsy magic act and the audience just thought, ‘Oh, they’re doing a Tommy Cooper act.’

He could say quite ordinary things and they were still funny. Eric Morecambe once went with a young Des O’Connor to see Tommy at the Golden Garter club in Manchester.

The club was full. Tommy turns up late as usual, starts his act and gets lots of laughs.

At one point, a waiter walked in front of Tommy and, purely by accident, dropped a tray full of glasses.

Tommy leant forward. Everyone was waiting for him to say something – and he just said, ‘That’s nice.’

He got an enormous laugh. Eric said to me, ‘It was brilliant. He wasn’t thinking of doing a funny line. He did a Tommy Cooper line.’

I was once working on a show with Tommy when he suddenly said, ‘Eric and Ernie are downstairs. Come on.’

So we walked down to the studio and I slid in with Tommy. Eric and Ernie were doing their warm-up.

Tommy walked onto the stage and immediately got a big laugh.

At that time, Dick Emery was all over the tabloids. He’d been married several times and had a very active love life.

Tommy, who could cry to order, started sobbing. Tommy then leant on Eric. It was very hard to get rid of Tommy if he was leaning on you.

Eric Morecambe, to his credit, said, ‘I could have murdered him but he was very funny.’

Still, it was a breach of protocol. Things had to be about Tommy. If you were in company, talking about current affairs, say, he'd get a pack of cards out and start saying, ‘Pick a card, any card.’

He had to be the centre of attention. There was a formidable ego.

That didn’t mean he was confident.

I’ve stood in the wings with him and he was almost trembling. It’s no coincidence that he very sadly died on stage, aged 63, in 1984, at Her Majesty’s Theatre.

I was watching Tommy that night on TV. When he suddenly sank to his knees, the audience innocently laughed. But I knew something was wrong – varicose veins gave him problems – and so did the director, who cued the commercials and got the band playing. Yes, there had been health problems and too much drinking. But he was still very good.

Towards the end of his life, an interviewer said it was amazing how Tommy could just walk on stage and people would start laughing.

‘You don’t know how much it takes just to walk on,’ Tommy said.

The cut-throat razor is back