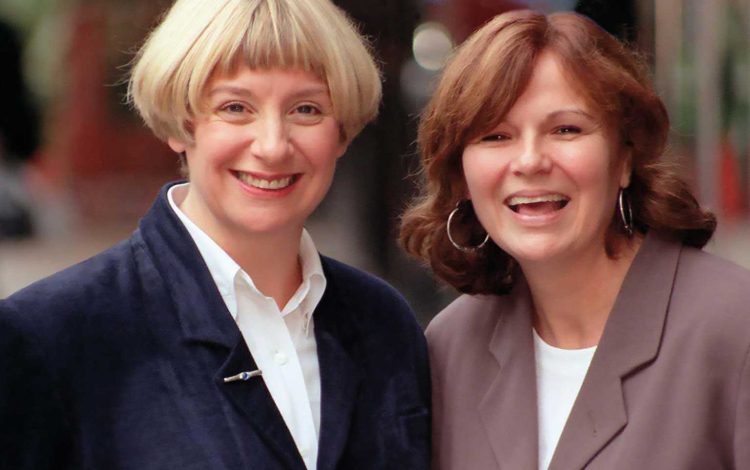 In December 1990, after three gruelling months performing stand-up in the West End, Victoria Wood set off by car for her home in Morecambe Bay. When traffic ground to a halt on the M1 the question of how to relieve herself had to be confronted.

‘While I will bob down anywhere at the drop of a hat,’ she wrote, ‘the middle of a stationary, three-lane traffic jam with not a tree in sight was a mite daunting, especially when one had a familiar face to the great British public (I didn’t want any other parts to become familiar, particularly).’

In the car with her were her two-year-old daughter, Grace, and a nanny. Darkness descended, word came that snow had closed the M6 and her mood turned sombre. ‘It was a long night,’ she went on. ‘I was scared Grace would die of cold . . . At 5.00, someone said an ambulance was coming down the other carriageway with HOT SOUP – so I rushed over for two lots of tomato but it was cold. Another low point.’ After 22 hours, they were allowed to turn through the barrier and return to London. The motorway, she added, ‘must have been like Horse Guards Parade by morning.’

When I was invited by Victoria’s estate to write her authorised biography, I knew I could draw on our many interviews to place her voice at the heart of her story. But, beyond two boxes of business correspondence in her archive, I had no idea how many private letters Victoria had written.

Then, at my first port of call, Victoria’s sister Rosalind thrust a jiffy bag at me, containing the earliest example of her handwriting, a postcard from 1957 when she was four. ‘LOVE VICKI,’ she inscribed above a couple of crosses, one vertical as a crucifix.

The bulk of Rosalind’s letters covered the six years Victoria spent in Birmingham, first as a student, then as a struggling entertainer.

As she prepared to make her network TV debut on the talent show New Facesin 1974, her mood swung from braggadocio to angst in the letters. At her audition, the producer ‘came in, sat down, and said, “Right, make me laugh.” So I did.’ Then came the broadcast. ‘I bet I get hammered on “New Faces” – they award points for “Star Quality”. Won’t win. Never mind.’

The more I learned about the long shadow cast by her lonely youth, the more I came to recognise these mood swings as intrinsic.

Whenever I met a new contact, I would beg for letters. To Roger McGough in 1976, she described her first stabs at sketch writing. ‘I keep thinking I must have a serious bit here, and then a song etc which is stupid. Isn’t writing HARD? I can’t tell whether things are funny or not.’

Her university friend Robert Howie, who had the foresight to keep the franked envelopes containing Victoria’s typically undated letters, was nonchalantly informed of a forthcoming big break in 1980. ‘I’ve just recorded a TV show for New Year’s (Wood and Walters). 10.20pm, if you can stick Dr Zhivago first.’

Approaching the years of her peak productivity, I worried my luck would peter out. Would she have been too busy to dash off letters? Then, some months after I interviewed the actress Jane Wymark about their time together at university, she mentioned that she might have something in a cupboard. In her kitchen, she pointed to a shopping bag. It brimmed with letters spanning the 1980s, when Jane was living abroad and Victoria sent her long, vibrant reports about, among other triumphs, the creation of Victoria Wood As Seen on TV. ‘Tomorrow I am being filmed Swimming the Channel which I know will be F**king Freezing and I will have to be a Jolly Good Sport about it. It’s a night shoot in the North Sea (yet again, who wrote this?)’.

When Victoria had two children, my anxiety resurfaced that she would be too preoccupied for correspondence, only for a fresh deluge to be triggered by her acquisition of a fax machine, via which she would send long, frank accounts of mothering and the labour pains of her sitcom dinnerladies. [NOTE TO SUBEDITOR: VW insisted that dinnerladies have a lower-case d and that’s how it appears in the biography. JR] In 2001, just as she sold out the Albert Hall for the fortieth time, the jokes dried up and her letters began to exude pained regret and self-blame at the imminent demise of her marriage.

Around this period, Victoria’s faxes ominously started to mention a CompuServe address. For years, biographers have made dire predictions that email would kill off their profession, as paperless communications are somehow harder to store and retrieve.

As Victoria is arguably the first major biographical subject to have lived across the faultline between the letter and the email, I had been dreading the moment she crossed this Rubicon. Sure enough, various interviewees confessed that the digital correspondence I sought was two crashed laptops ago or had been wiped in a hard-drive cataclsym. I’d even mislaid my own emails from her. Happily, some friends had hoarded enough gems for me to keep track of her moods and movements as she turned towards drama and directing.

What shone out in all but her most dutiful dispatches was that Victoria was determined to deliver a performance even to an audience of one. One week in 2010, she caught demoralising live performances by Julie Andrews and Debbie Reynolds, and treated the spectacle as a warning. ‘In twenty years’ time,’ she emailed to her musical collaborator, Nigel Lilley, ‘please don’t let us be on the stage of some small, half-empty theatre with an audience of old gay men – you on the piano/bontempi and me in a red-sequinned trouser suit . . . I want to quit while I’m ahead.’

In truth, she had no such desire and was still full of plans when illness came to claim her in 2015. Even now, she could not suppress her instinct to entertain. ‘Left chemo at 8 45 last night,’ she told Jane Wymark. ‘I was the last baldy standing – I thought they would tell me to turn out the lights and pop the keys back through the letterbox.’

It is only because of Victoria’s untimely death in 2016, at the age of 62, that any of these letters have come to light. My ultimate worry was that the estate, when they saw how many private communications I had managed to unearth, might decree that I had lifted a veil on a hinterland that Victoria would have wished to keep shrouded. No such intervention came.

When she first began writing to friends Victoria adopted a polite sign-off that suited her Lancastrian aversion to gush: ‘Affec rgds, Vic.’

My own affectionate regard for Victoria has not blinded me to the complications of her genius. One of my favourite letters illuminates the chasm between her much-loved public persona and her crippling social awkwardness.

At a party in the Lake District in 1986, she stationed herself in the kitchen to mix cocktails and wash up. ‘Of course, the longer I stayed in there, the more difficult it became to make an entrance without looking poncey, so I stayed in there all night and didn’t have to speak to anybody, which was great.’

Let’s Do It: The Authorised Biography of Victoria Wood by Jasper Rees (Trapeze Books, £20) is out now

I'm no longer in love with myself