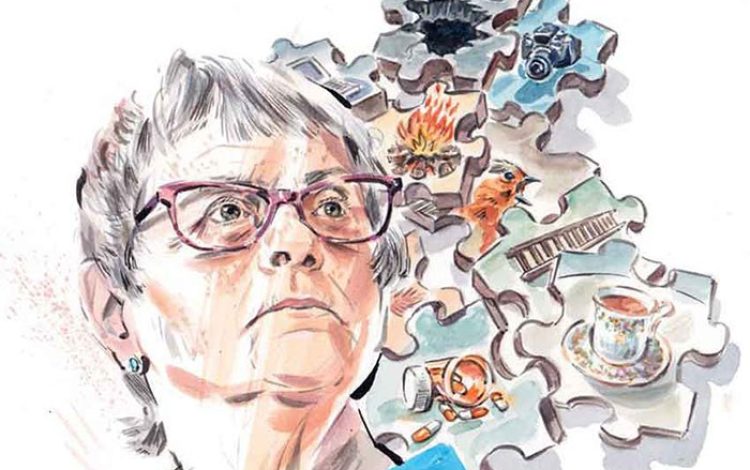 The first symptoms of the brain disease that is destroying my mother and derailing our family became apparent seven years ago. It had probably been lurking around, undetected, far longer than that.

Dementia camouflages itself until the neurological damage is well underway. There is no cure. Unlike with cancer, the diagnosis comes without aftercare. Despite the fact that it afflicts one in 14 people over the age of 60 and one in six people over the age of 80, we have very little understanding of what it is like for those who have this cursed condition.

Currently 50 million people worldwide live with dementia; it is estimated this will increase to 152 million by 2050. So we’d better all buy this godsend of a book.

I didn’t realise, until then, that my mother can probably no longer see the colour black. What she sees instead is emptiness. A black tablecloth looks like ‘a giant sinkhole in the middle of the dining room’. When I visit her in my black coat, black scarf and black trousers, I look like a floating head, half of which is covered by a mask.

She could have a similar problem with whiteness, meaning that mashed potatoes and chicken disappear on a white plate. In order to see white food, it should be served on a plate that is yellow or blue.

I now also understand that her taste buds will have changed: her beloved cup of tea probably tastes like swede. When she’s eating with other people, all she hears is the deafening clang of cutlery.

This book follows on from Wendy Mitchell’s bestselling memoir Somebody I Used to Know (2018), where she described being diagnosed, aged 58, with young-onset Alzheimer’s. She hadn’t planned on being around this long, Wendy confesses on her first page, but ‘Here I still am.’

Her aim is to share what she has learned so far, in the hope that ‘it will help you to live the best life you are able to with the disease, or support someone you know far better’.

Now in her mid-sixties, she is holding on to her independence, still living alone in her village and taking regular country walks with her camera (in northern Europe, a third to half of those living with dementia live alone).

She has no carers, but her daughters keep a close eye on her. They have trackers on their phones so they know at any point where their mother can be found. Alarms on Wendy’s iPad remind her to eat (she no longer feels hunger) and Alexa, the household computer, tells her to take her medication. A technophile, she continues to blog, tweet and Zoom.

What she has to say, Wendy warns us, may come as a surprise. The first surprise is that amnesia plays such a minor role in living with dementia.

She explores the major effects of the disease on six areas of her life: senses, relationships, emotions, environment, communication and attitude. The chapter on the senses is as extraordinary as anything by Oliver Sacks. The memory of a smell, such as burning wood or cat pee, is released from the past in what is known an ‘olfactory hallucination’. These hallucinations can be so real that the fire brigade might be called to tackle a non-existent blaze.

Wendy also explains how, when confronted with a flight of stairs, she needs first to decipher whether she is approaching an escalator or a slide. If the steps are all the same colour, she has no idea where to put her feet. Patterned carpet is the worst.

Touch becomes more important than ever: a ten-minute massage makes all the difference to someone who is feeling disengaged from their world.

Communication, Wendy reminds us, need not always be verbal, but it is important to keep talking, even when there is a confused response. After all, we chatter lovingly to babies despite the fact that they can’t understand us.

The most surprising revelation of all is Wendy’s admission that ‘I feel guilty for the happiness I have found and wish that I could give some of it away’.

What does happiness mean when you live from moment to moment? ‘Seeing a bird singing away to its friend, being out for a trundle, capturing a squirrel peering out from the trunk of a tree.’

Wendy Mitchell is a life-saver.

Frances Wilson is author of Burning Man: The Ascent of D H Lawrence

Napoleon's Plunder and the Theft of Veronese's Feast, by Cynthia Saltzman - Niall Hobhouse

The Red of My Blood, by Clover Stroud - Frances Wilson